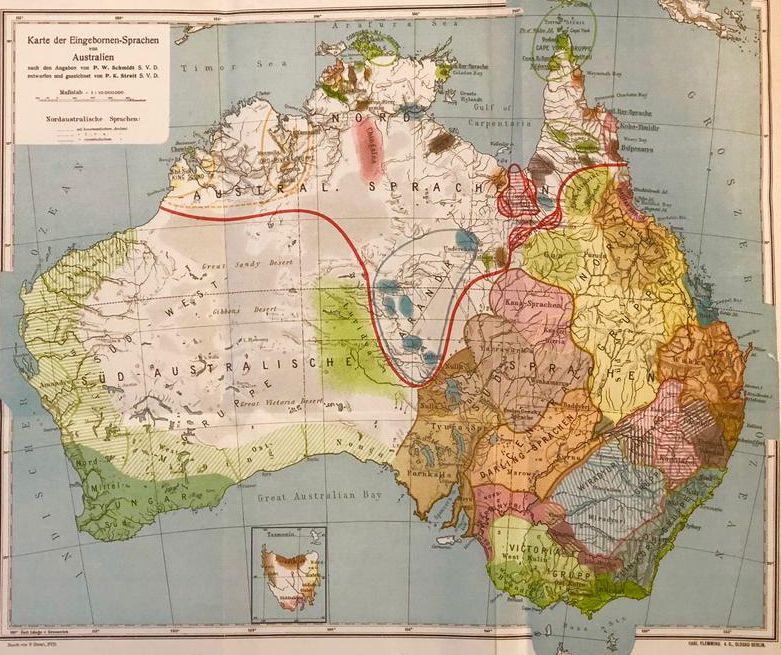 Tindale, Norman B. Tribal boundaries in Aboriginal Australia, 1974. Originally published as part of Aboriginal tribes of Australia. "This map is a reproduction of Tindale's 1940 map of Indigenous group boundaries existing at the time of first European settlement in Australia. It is not intended to represent contemporary relationships to land."  Also available to view and download from the State Library of New South Wales.

The State Library holds many mapping resources that illustrate the Language Groups and Tribal Boundaries of Aboriginal Australia. These maps can be helpful in understanding the relationships to land observed by different groups, and can be useful for identifying the provenance of cultural material.

Some of the European mapping resources listed represent Indigenous group boundaries as they existed at the time of first European settlement in Australia while others illustrate the more current distribution of language use.

This method of mapping the land is a European phenomenon. The original owners and occupiers of the land relied upon the landmarks of their Dreaming trails to mark their boundaries and navigate their way.

Hercus, Luise, Hodges, Flavia and Simpson, Jane (eds). The land is a map : placenames of indigenous origin in Australia, 2002.

Johnson, T. Harvey. Some Aboriginal routes in the western portion of South Australia, 1940-41.

South Australian Aboriginal dreaming of the Flinders Ranges : a journey into an ancient land, rich in Aboriginal culture and heritage, 2001.