Benefactors and donated collections: Friends of the State Library

A richness of gifts

The Friends of the State Library have enriched the Library's collections immeasurably. From a leaf of the first edition of Chaucer's Canterbury tales to Arcana by George Perry, the first book to feature an illustration of a koala, the items cover many subjects and formats. 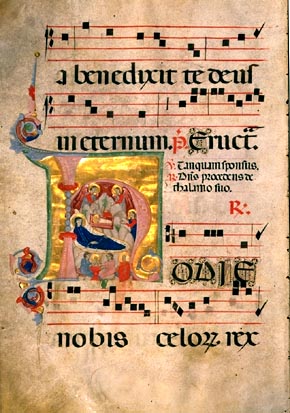 In 1945 the Friends of the State Library of South Australia presented the Library with a magnificent 13th century Italian antiphonal.  It is written on vellum, and contains the text and music for the sung responses proper to church services for the Temporal cycle of the Christian church year from Christmas Eve to the end of the feast of the Epiphany, as they were celebrated in a central Italian monastery. The beginning of each service is marked with a richly illuminated initial letter, the largest, the letter H, seen to the left, occupies half a page.

This very large (570 x 395 mm) manuscript was purchased in 1945 for £77.10.0 at the sale of the library of Arthur Bryant Triggs, grazier and antiquarian collector, in Yass, New South Wales. The manuscript originated in central Italy, possibly near Bologna.

View a number Treasures of the State Library of SA that where acquired by the Friends.

Who are the Friends?

The Friends of the State Library of SA began in 1932 during the Great Depression. At that time there were insufficient government funds to purchase even basic requirements. The Friends came to the Library’s aid and have continued to support the Library’s work and promote its interests ever since.

This has meant funding the acquisition of large numbers of rare and fine books, unique manuscripts, children’s games and artworks to strengthen the many special collections which the State Library holds.

Publications by the Friends

The Friends are publishers as well as purchasers of books; since 1995 the Australiana Publications sub-committee of the Friends has produced over thirty titles. These include elegant reproductions of important and beautiful historical works, making out-of-print pieces of Australian history available to a new audience. The books are published in limited editions, hand-bound in leather or cloth, and given added interest and value through scholarly introductions and superbly reproduced illustrations.