The Don Bradman website provides an overview of his career, a biography, footage of Bradman in action and links to Don Bradman on the Digital Collection which showcases the magnificent items in the collection and his illustrious cricket career.

The Bradman Collection forms the archival private record group PRG 682, and a full colour illustrated Guide to the Sir Donald Bradman collection held in the Mortlock Library of South Australiana was compiled by its curator Neil Thomas (Adelaide, The Libraries Board of South Australia, 1992).

The State Library's Bradman Collection at the Adelaide Oval

Items from the State Library's Bradman Collection, including cricket bats, balls, trophies, items of clothing and more, are on display at the beautiful Adelaide Oval. The purpose built museum is located in the Riverbank Stand.
Access through the South Gate off War Memorial Drive - just past the Barrie Robran statue. 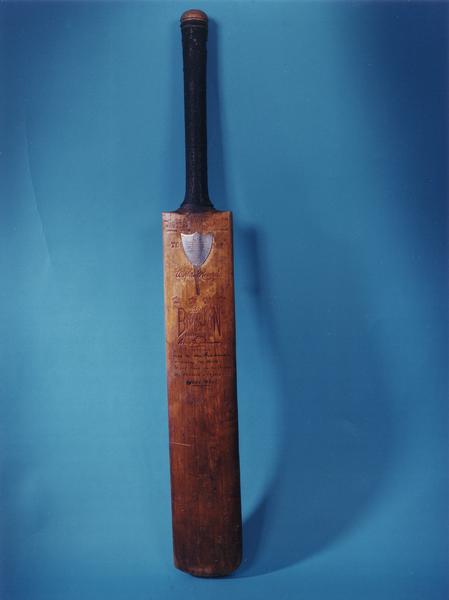 PRG 682/1/6 The bat used by Bradman in scoring the then world record score in Test Cricket, 334, Australia vs England, Third Test, Leeds, July 1930. Writing in My cricketing life, (London: Hutchinson, 1930) Bradman wrote The best bat I ever had was the one I used when I made my record score of 334 against England at Leeds in 1930. It had that indefinable something about it which made up (for me) perfect balance and apparently unlimited power.

The Bradman Collection held by the State Library began in the late 1960s when the then State Librarian Mr Hedley Brideson, who was a member of the same Adelaide Rotary Club and a friend of Sir Donald's, approached him about donating his collection of cricketing memorabilia to the State Library for safekeeping.

The creation of a series of scrapbooks relating to his cricketing career was a project undertaken in conjunction with assembling the collection. The project took several years and involved Peggy Mountford and Jill Gauvin working with Sir Donald on the project. Preservation Services staff assisted by copying photographs, menus, newspaper cuttings and telegrams and mounting the material in albums. Leather spine bindings complemented the handsome appearance of the scrapbooks.  The State Library's set is a photographic duplicate made up at the same time as the original collection of albums which is now held by the National Library in .

Over time, Sir Donald donated many items of clothing, memorabilia and tape-recordings under a Commonwealth Government program now known as the Cultural Gifts Program. The collection was on display in the Institute Building in an  exhibition formally opened by the Prime Minister of Australia, the Honourable John Howard on 29 January 1998. The collection is now on long-term loan to the South Australian Cricket Association and on display at the Adelaide Oval. Sir Donald’s collection of scrapbooks is still in the Library and can be viewed upon request via the catalogue. A selection of digitised scrapbook pages can be seen online via the image viewer. The lenticular wall in the Spence Wing has facsimiles of a few bats used by Sir Bradman.

Sir Donald Bradman is regarded by many as the greatest batsman in the history of cricket and was one of Australia's most revered sporting personalities.

Donald George Bradman was born at Cootamundra, New South Wales, on 27 August 1908, the fifth and youngest child of George Bradman and Emily, nee Whatman. The Bradman family moved to Bowral in 1911 and took its place in the activities of the local community.

Cricket was one of the district's popular sports and the young Don Bradman showed an interest from an early age.  When there was no-one to play cricket with him, he devised his own way of perfecting various techniques, using a cricket stump to hit a golf ball thrown against the tank-stand at the rear of the Bradman house. Sir Donald's cricketing career is well documented in the Bradman Digital Library website and elsewhere.

Don Bradman married Jessie Menzies in St Paul's Church in Burwood, Sydney, on 30 April 1932, and they moved to to live in 1934 to work for a local stockbroking company. Their first-born son died as an infant in 1936, their second son, John was born in 1939 and their daughter, Shirley was born in 1941. Don Bradman enlisted in the armed services on 28 June 1940 but was invalided out in June 1941. In 1945 he established his own stockbroking business  from which he retired in 1954. Jessie died in 1997, the end of the 'best partnership' of his life, and Sir Donald died at home on 25 February 2001, aged 92 from pneumonia.

Don Bradman was knighted by King George VI in the 1949 New Year's Honours List for his services to cricket and Commonwealth relations, and Sir Donald was created a Companion of the Order of on 16 June 1979.

Bradman's overall performance in Shield and Test cricket is still without parallel.  His Test average was 99.94 and his Test aggregate 6,996 runs.  In 96 Sheffield Shield innings he averaged 110.19. 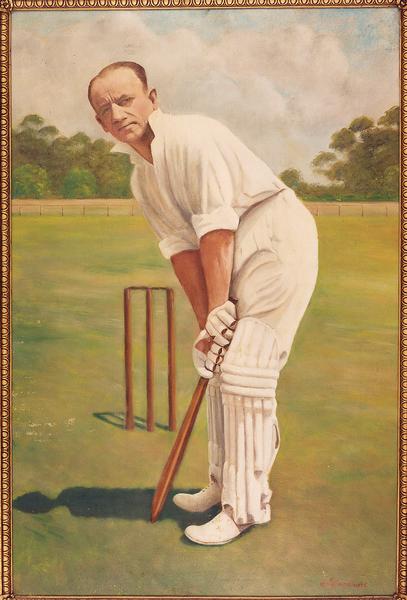