Nature Foundation SA  is a non-political, non-government organisation governed by a council of experienced conservationists, scientists, business and professional people all serving in a voluntary capacity. It promotes responsibility for protecting the environment, good environmental practices and foster community understanding of the value of our natural heritage and the importance of conservation - now and for the future. Barbara Hardy was instrumental in setting up its forerunner, the National Parks Foundation of South Australia in 1981, and 30 years later is still involved in a foundation which has raised millions of dollars of on-ground projects to benefit the environment.

In an interview held by the State Library Barbara talked about her involvement Towards the end of 1981 I was involved in setting up the National Parks Foundation of , which is a non-government body. It was begun by a group of people – Dr Mark Bonnin, Warren Bonython, David Cleland myself initially got together in Dr Bonnin’s office. He was a specialist physician, He was a very expert ornithologist, amateur ornithologist. Warren Bonython, as we all know, was a great conservationist and a walker, and David Cleland had been very involved in Scouts, but he was also, as you would guess by the name, a relation of Sir John Cleland. … we then set about trying to raise some funds. OH 250/7 page 26

Nature Foundation SA celebrates its 30th anniversary in 2011, a centrepiece of its activities being the Barbara Hardy Fund for Nature Appeal. 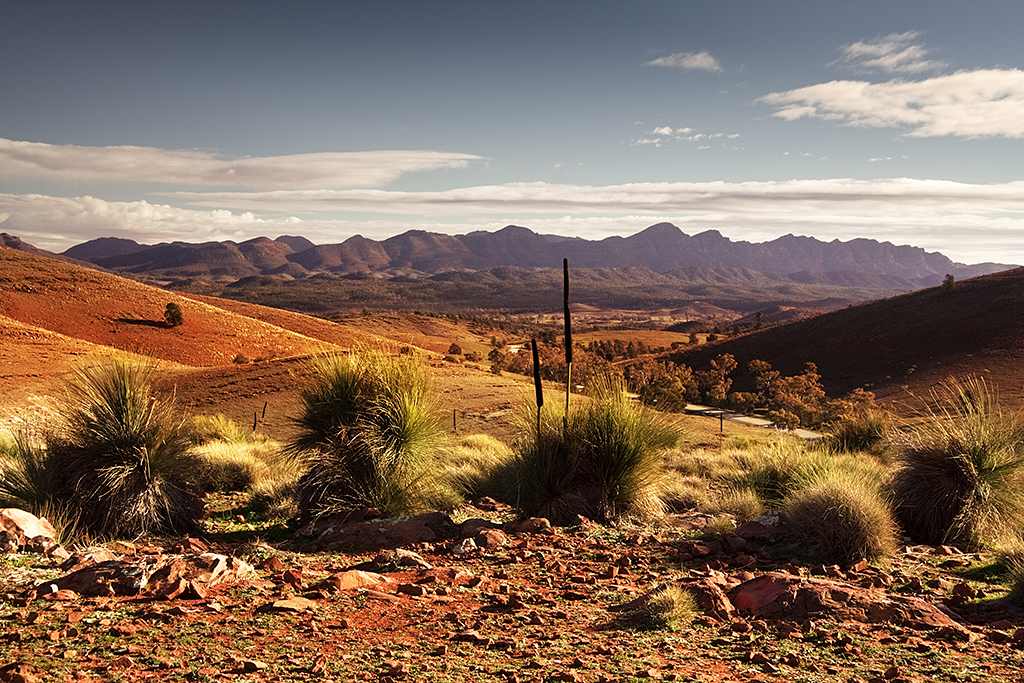 B 71610 : Wilpena Pound, 2007 photographed by Cain Doherty
You can view more information about this image here.

On one of her seven camping trips to the with her children in the 1960s, Barbara had a moment about the need to protect and conserve wonderful places like the Flinders. I can almost remember the place on the road, between Hawker and Quorn, where I thought ‘The pressures of those people on the Ranges – how are the Ranges going to stand it . . .  and how can I help?‘ Talking to Reg Sprigg at Arkaroola awakened an interest in geology and volunteering at the new Conservation Centre in 1972.   OH 250/7 page 12

The federal government invited Barbara to chair the state Landcare committee in 1989. She says I remember thinking, ‘How can I do that?’ But I was so keen to help. … I believed that natural areas on the Register of the National Estate are all underlain by soil, and unless the soil is healthy, the integrity of those registered sites is not going to remain good…So I’d been trying to push soil conservation through the Heritage Commission, but they weren’t terribly interested at the stage. They are now, but they weren’t back then. …And of course I’d studied it during the seventies when I went back to Flinders and did earth sciences.  OH 250/7 page 42