The colonists planted 20 acres of wheat on the fertile Adelaide Plains in 1838, which was so successful that soon the colony became known as 'The granary of Australia'. Turning the harvested grain into flour was a high priority and flour milling became the colony's first secondary industry.

Richard Venus has described the early mills of Adelaide in his booklet Engineering a city (Adelaide: Engineers Australia (SA Division), 2009) which is a walking tour of how Adelaide was designed and built. Mills were powered by wind and steam.

Two wind-powered mills were erected in 1842. The City Mill in Wright Street was an octagonal smock mill, 30 feet high and built of local timber. The circular tower of the West Terrace Mill built for Phillips and Horne was designed by George Kingston. The walls were three feet thick and 50 feet high and built of bricks made from River Torrens clay. The sails were damaged by lightning in 1845 and a steam engine was then installed. This West Terrace mill is featured on the Lost Adelaide: West End walking tour app.

In Light Square a roller mill was owned by John Wyatt and powered by a steam engine made by his son George. Clark's Steam Flour Mill & Biscuit Bakery in Halifax Street was later adapted to house the destructor station.

Three major mills were built on the outskirts of the city. The developer of the wheat stripper and harvester, John Ridley's mill at Hindmarsh was the first in the colony to produce flour in 1840. The South Australian Company had a mill at Hackney, and Dr Kent's mill in Kent Town later moved to Grenfell Street and was renamed the Albion. 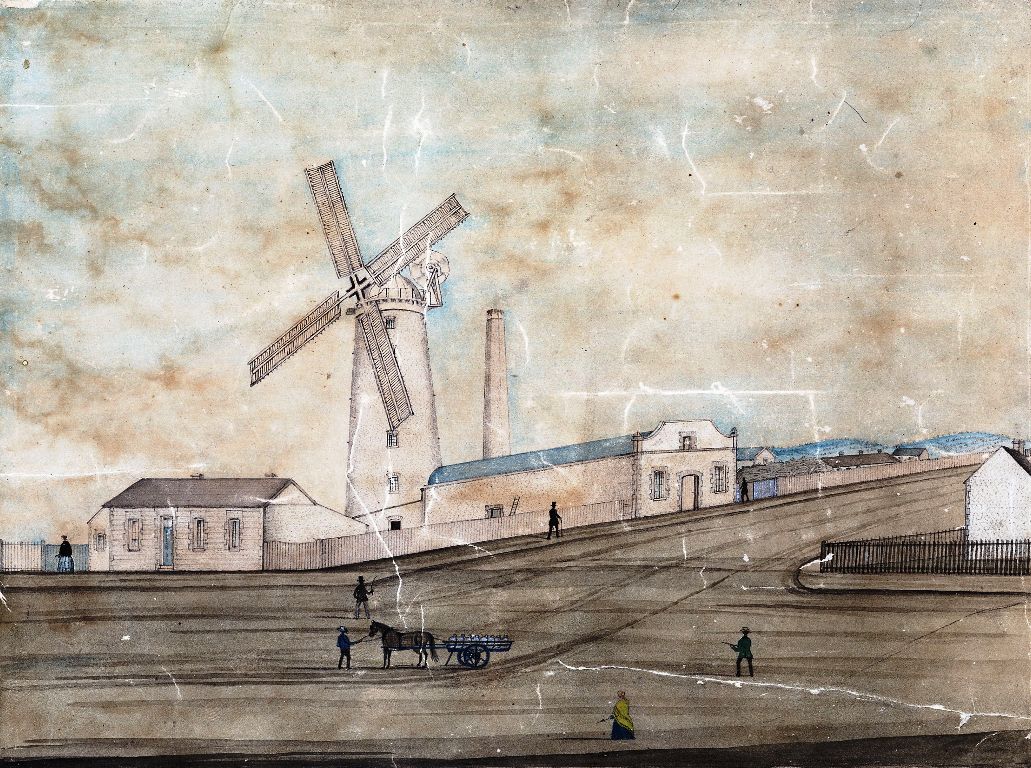 Watercolour sketch by Charles Summers showing the West Terrace flour mill on the east side of West Terrace, corner of Waymouth Street ca 1850.

Find more information about this image here. You may order a high quality photographic copy. No known copyright restrictions - Conditions of use.

A long and detailed description of the West Terrace flour mill and its operation was given in the Southern Australian newspaper on 28 February 1843 page 2 column b.

'We intend first to describe the Adelaide flour mills, eight in number, and shall commence with Messrs Phillips and Horne's mill.

This is a windmill, situated on West terrace, which is universally admired by those who have had the pleasure of seeing it, for the excellence of the design, its substantial workmanship, and the beauty and completeness of the machinery. It is built of brick, made on the banks of the Torrens, considered of a quality quite equal to English. The wood work is all of Baltic timber. The only reason why native timber has not been used is the difficulty of getting it properly seasoned. For this purpose it ought to be laid for a considerable time in water, and then dried in the shade. We believe, a proper seasoning cannot be expected in less than - ....'