Darkness in the City of Light: Walking tour: Social issues 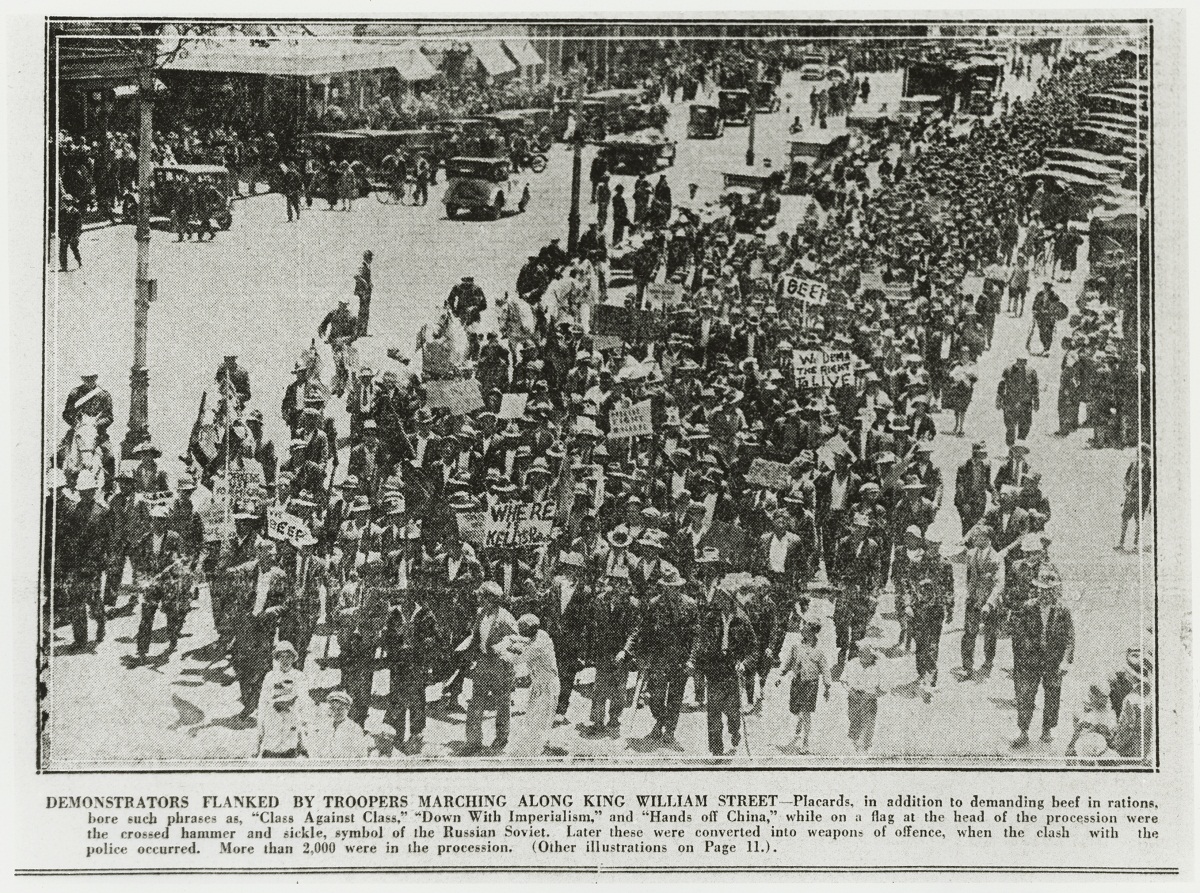 The Beef March: B 60882
View more information about this image here. No known copyright restrictions – conditions of use.

Australians had lived relatively prosperous lives post World War I, but the worldwide economic depression of the late 1920s hit Australia with ferocity. A devastating drought and heavy borrowing by successive state governments combined to affect South Australia earlier and arguably harder than other states. More than 200 factories closed during the depression and the unemployment rate hovered around 30%. As more and more men became 'workless', large sections of the community became impoverished; surviving on scant government handouts and food rations. Cheap cuts of (often green) mutton, flour with weevils and bug-affected dried fruit were the goods the unemployed had to suffer. Among the hardest hit were ex-servicemen and their families who felt betrayed by a country for which they had sacrificed so much.

On Friday 9 January 1931, the widespread discontentment of these struggling families boiled over. A thousand people, mostly unemployed men, but some women and children, proceeded to march from Port Adelaide up the Port Road. They were joined by a thousand more protesters on the outskirts of the city. After visiting parliament, which was not sitting, they headed for the Treasury Building and the office of Labor Premier Lionel Hill. When Hill refused to talk to the gathering, the group got more and more incensed and the police decided to use force to break up the assembly. Protesters used banners and flags to retaliate and much blood was spilled.

Large sections of the press blamed 'communist agitators' for the march and resulting violence and condemned those that took park. Despite criticism from the elite, those existing on rations were eventually able to get better quality meat from their local, rather than government sanctioned, butcher, and the quality of the rations largely improved.

For more information about the Beef riots see SA Memory. 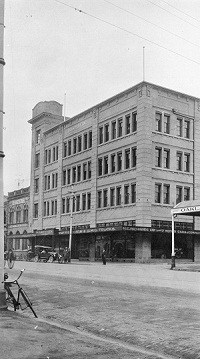 HC Richards building, Currie St.: B 3589
View more information about this image here. No known copyright restrictions – conditions of use.

During World War II several radio stations were ordered to end their transmissions by the Australian Government due to allegations that secret coded information had been broadcast to the enemy. The four radio stations closed were 5KA Adelaide, 5AU Port Augusta and 2 associated stations interstate.

5KA was located in the Richards building at 99 Currie Street. On the evening of 8 January 1941, on orders by the Department of the Navy, the radio broadcast was suddenly silenced with no explanation given to listeners.

The next day newspapers were full of reports that ongoing Intelligence had shown either deliberate or accidental leakage of information on shipping movements in Australian waters to the German Navy. Measures had been taken by closing the radio stations as an act of National Security. The Minister of the Navy, Mr. Hughes, denied that the action was based on the stations' religious connections with the Jehovah’s Witnesses, who have a well-known opposition to military service.

5KA started as a sports broadcaster in 1927 and was taken over by the Jehovah’s Witnesses in 1930. There was ongoing conflict between 5KA management and the Wireless Department over complaints about the nature of their religious broadcasts. In particular, the airing of lectures by the American Witness leader, Joseph Franklin Rutherford was especially criticised because of his anti-conscription and anti-nationalist stance.

Despite raids on the Adelaide premises of the Witnesses and 5KA staff, evidence proving the alleged broadcasts was never uncovered, and the station was allowed to operate again, but under strict conditions. It seemed likely that the station was closed as part of a wider national enquiry into the Jehovah’s Witnesses and their anti-war stance. Adding to Government suspicions, Witness publications had been found in the homes of communists raided by police after the Communist Party ban in 1940. As a result, Jehovah’s Witnesses were banned from associating under National Security Regulations. In 1943, they won a High Court case which allowed them to associate again under the free exercise of religion in the Australian Constitution.

5KA radio was purchased in 1943 by the Methodist Church and attached to the Central Methodist Mission. In the 1990s 5KA was bought by the Triple M network and now broadcasts in Adelaide as 5MMM.