Darkness in the City of Light: Walking tour: Characters 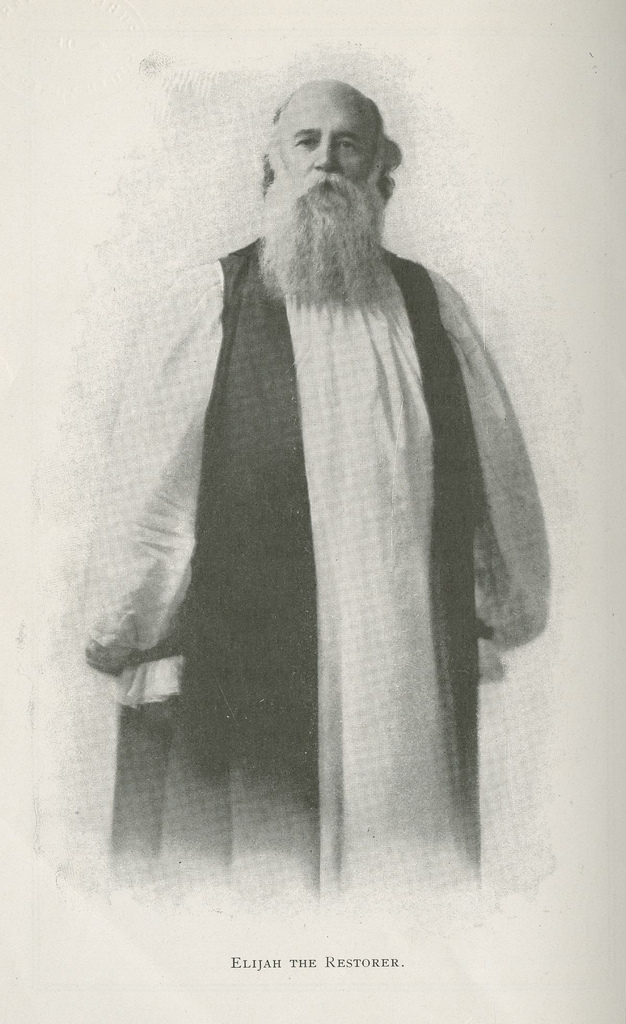 The Reverend John Alexander Dowie as Elijah the Restorer.
View more information about this image here. No known copyright restrictions – conditions of use.

On Monday 21 March 1904, thousands turned up at the Adelaide Town Hall. They had come to see the Rev. John Alexander Dowie, once a South Australian Congregationalist minister, now a world famous fire and brimstone evangelist. Styling himself the Prophet Elijah the Restorer and God’s Divine Healer he had founded Zion City near Chicago. Here the Rev. Dowie made the rules, and lots of money, from land sales and fines. But Dowie was a big spender, so he embarked on an ‘Around the World’  tour to raise funds. Having successfully preached to thousands in New York’s Madison Square Gardens, he expected a similar response in Australia.

He was wrong. Although he had dedicated followers here many Australians were loyal to their own established churches. They hated Dowie's message that all religions but his were false. In Sydney and Melbourne hecklers had broken up his meetings. As a result extra police stood by in Adelaide as tickets were slowly checked. By 7 pm the impatient crowd had started to surge forward and frightened ushers stopped entry.

Dressed as the prophet Elijah (but more expensively) the preacher came on to the stage, weeping for his audience’s sins. He told them they were all heading straight to Hell unless they repented – and of course handed over their hard-earned cash. This was met with jeers of ‘Get your hair cut Elijah.’ Hundreds rolled up their programs and chucked them at the self-proclaimed prophet. By now, the prophet was screaming at his gold-braided goons to throw out the troublemakers. Stink bombs were hurled. Outside 'for several hours, a reckless rabble, numbering several thousands, surged to and fro...singing, shouting, and yelling.’ (The Advertiser, 22 March 1904, pp 5) Violent scuffles broke out. Town hall windows were broken and the meeting ended in chaos. Dowie fled but the crowd followed, besieging the York Hotel where more windows were broken.

Dowie held one more Adelaide meeting which also ended disastrously. Furious, he railed that Australians were ‘villains, perjurers, servants of the devil and filthy, disgusting stinkpots’ (Blaikie, George, Great Australian Scandals, p 174.) He vowed to return by yacht with a thousand guards to deal with his detractors. He never got the chance. While on tour, his Zion City accounts had been checked and money was missing. A coup followed and Dowie was denounced as a great sinner and removed as leader. In 1906 he suffered a stroke and died the following year.

Kingston duel : in the shade of the GPO 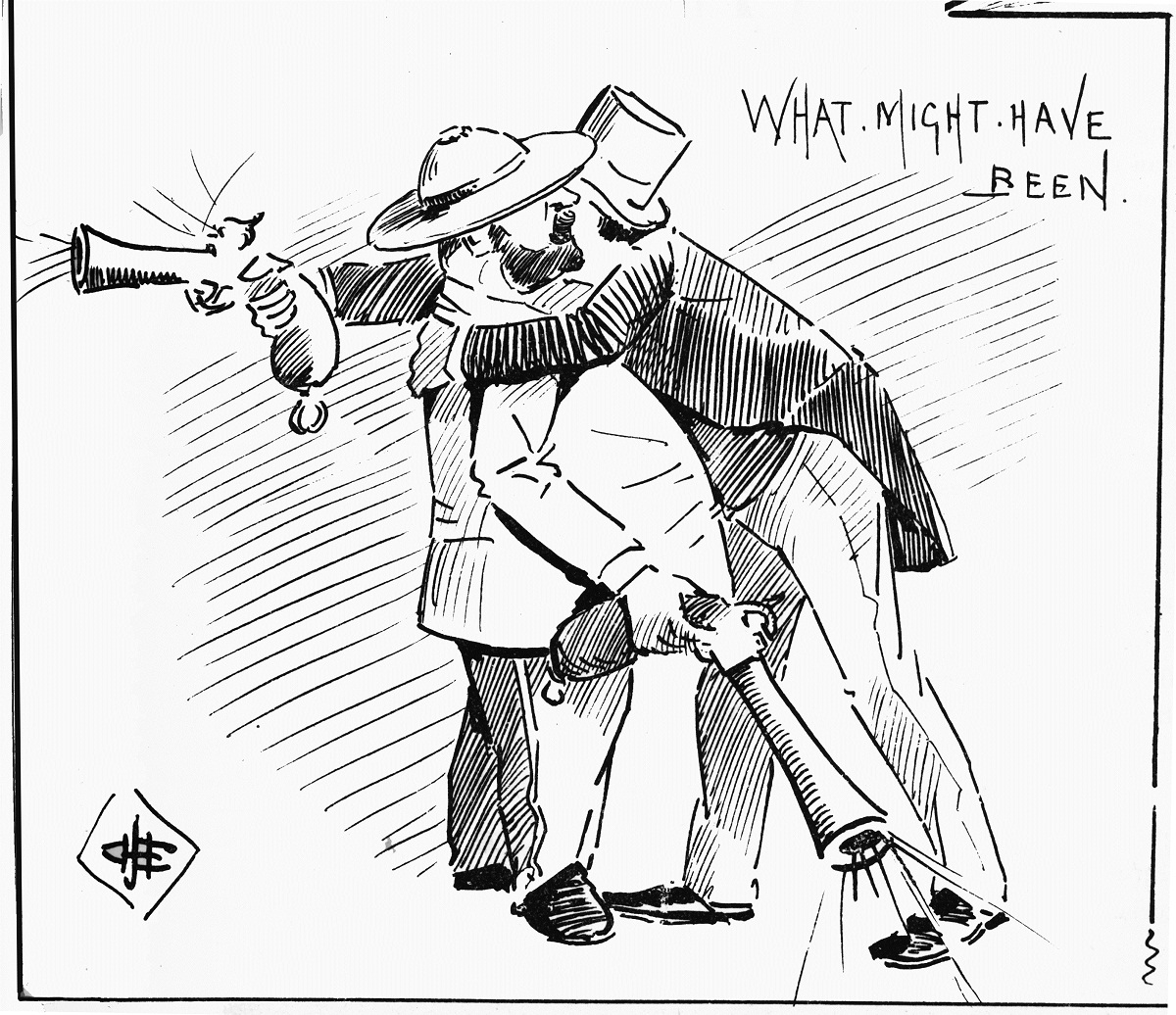 What Might have been: Quiz and the lantern, 6 January 1893, p. 9
View more information about this image here.

Charles Cameron Kingston was a lawyer, liberal politician and the Premier of South Australia from 1893 to 1899. A man of contradictions, he was responsible for introducing the act granting the vote to women in 1894, after opposing women's suffrage while in opposition. He also established the State Bank and made other significant reforms. An athlete of considerable strength, he was well known for his colourful personality and volatile temper.

On 23 December 1892 he challenged his arch rival, conservative MP Richard Baker, to meet him in Victoria Square at noon the next day for a duel with revolvers - he even supplied Baker with the gun. Rather than accept the challenge the shocked Mr Baker had his son stand guard at his office with a shotgun while he contacted police. The police arrived at the designated hour in the shade of the Post Office, to arrest Kingston, eventually charging him with inciting Baker to breach 'the peace of Our lady the Queen, her Crown and dignity'.

There was much conjecture in the press about why Kingston would create such an incident, knowing full well there would be consequences. Some claim it was an attempt to gain significant publicity, which he did, but others suggest it was purely an act of impetuousness. Whatever the reason, it did his political career no harm. He became the Premier of the state only a year later - while still under the order to keep the peace - and eventually moved into federal politics helping draft the Australian Constitution and serving as the minister for trade and industry in the first parliament.

For more information about the Kingston duel see SA Memory and the Australian Dictionary of Biography. 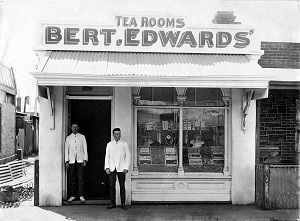 Albert Augustine (Bert) Edwards was born on 6 November 1888 in Adelaide’s West End. Known as ‘The King’ by West End residents, he had a colourful and controversial life, involved with hotels, football, politics and the law. He was also a philanthropist and champion of the poor.

From humble beginnings; he was born illegitimate, but claimed to be the son of Sir Charles Cameron Kingston, Bert left school early to start working. In 1912 he had a tea-room in Compton Street. He ran an illegal two-up shop in the back of the tea rooms. The quaint little building was later occupied by the Metropolitan Saw Works.

Owning several hotels, he was once a publican of the Newmarket Hotel on North Terrace. The hotel was opposite the livestock market and slaughterhouse, and it is thought that the term  ‘butcher’, for the South Australian measure of beer, was first used here.

A prominent public figure, Bert was an elected member of the Adelaide City Council, an official with the West Adelaide football club, and a Labor Member of Parliament for Adelaide. In an era when homosexuality was unacceptable, controversy reigned when Bert was charged and sentenced for having committed an 'unnatural offence' in 1931. The trial, scandalous in its day, was closely followed in the newspapers. He was released from Yatala Labour Prison in 1933.

Re-elected to the Adelaide City Council in 1948, he remained a councillor until his death at the age of 75 in 1963. Bert’s funeral is said to have been one of the biggest ever seen in Adelaide, with tributes paid for all of the extraordinary types of help he had given to the city’s charities and to community groups.

For more information see SA Memory and the Australian Dictionary of Biography.