Darkness in the City of Light: Walking tour: Crime

I shot the Sheriff : the first hanging and a Government House murder 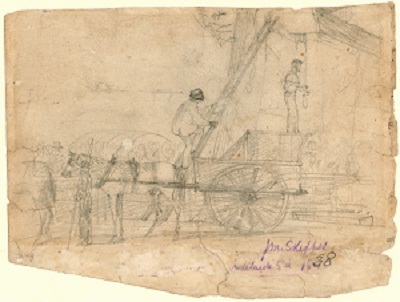 First execution in South Australia for shooting Sheriff Smart: B 7797
View more information about this image here. No known copyright restrictions – conditions of use.

Samuel Smart was the first Sheriff of the colony of South Australia, appointed in May 1837. One night several men broke into his cottage and fired a gun at him, the bullet grazing his cheek. The men were caught and 24 year old Irishman Michael Magee, who had fired the gun, was sentenced to death. It was to be the first execution carried out in the province of South Australia.

On 2 May 1838, Magee was hanged from the branch of a gum tree near the government store on Montefiore Hill. A horse-drawn cart was used as a scaffold. Sheriff Smart found it very difficult to find anyone willing to act as executioner, or “Jack Ketch” as the public and newspapers called him. When someone was found he was disguised by wearing a mask and a hump. Many people turned out to watch what was a grisly hanging; the noose was not placed properly, and the unfortunate Magee did not get a quick death. Artist JM Skipper drew a sketch of the scene of which the library holds the original.

Government House has not escaped its own share of violence. On the afternoon of 4 February 1862, a public sale of Governor MacDonnell’s furniture and effects was taking place when a shot rang out. The newly appointed Inspector of the Metropolitan Police, Richard Pettinger, was found lying in the hall of Government House with a shotgun wound to the head. He died within minutes of being discovered. It was first thought that Pettinger had shot himself, but not long afterwards John Seaver, a discharged policeman, was arrested. It transpired that Seaver had been dismissed from the Police force for drunkenness while Pettinger had been promoted over him. John Seaver was found guilty of murder and executed by hanging on 11 March 1862 in the Adelaide Gaol.

The inquest into Pettinger's death was partly held at the Gresham Hotel on the corner of North Terrace and King William Street. The hotel was demolished in 1965 and the Westpac Bank occupies the current building. 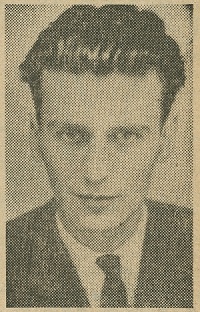 One of Adelaide’s saddest and most notorious crimes occurred here on 11 April 1953 when John Balaban, a young man from Romania, committed a triple murder and attacked a young woman. The victims were his 30 year old wife Thelma Joyce Balaban; 6 year old Phillip Cadd, Thelma’s son from a previous marriage; Mrs Susan Ackland, 66, Thelma's mother and Verna Maine, 24, a waitress from the Sunshine café.

The Sunshine café was the home of John and Thelma Balaban, who had been married for about 6 months. Thelma owned the café and the family lived in rooms upstairs. On the night of 11 April, John entered the building after a violent drinking spree and brutally attacked his sleeping family before turning on Verna Maine.

A newspaper photograph shows the path of the 20 foot jump that Maine took when she escaped through the upper story window. Witnesses thought that the woman had been pushed from the window and called the police. With Maine lying critically injured on the footpath, the police entered the building and found that Mrs. Balaban had been killed in her bed. Her mother and her son were found critically injured and taken to hospital where they later died.

After his arrest Balaban also confessed to the murder of Zora Kusic, 29, who was found dead inside a house in December 1952.

Balaban was executed for the death of Kusic. A man with a history of instability and violence, in an unsworn statement he admitted responsibility for all of the murders, saying that they “deserved to die” (The Advertiser, 25 July, 1953, p. 15).  The sentence was appealed on the grounds of insanity but the appeal was dismissed and Balaban was hanged at the Adelaide Gaol on 27 August 1953.

The Hooker Buildings : salvation, suffering and a bet on the side 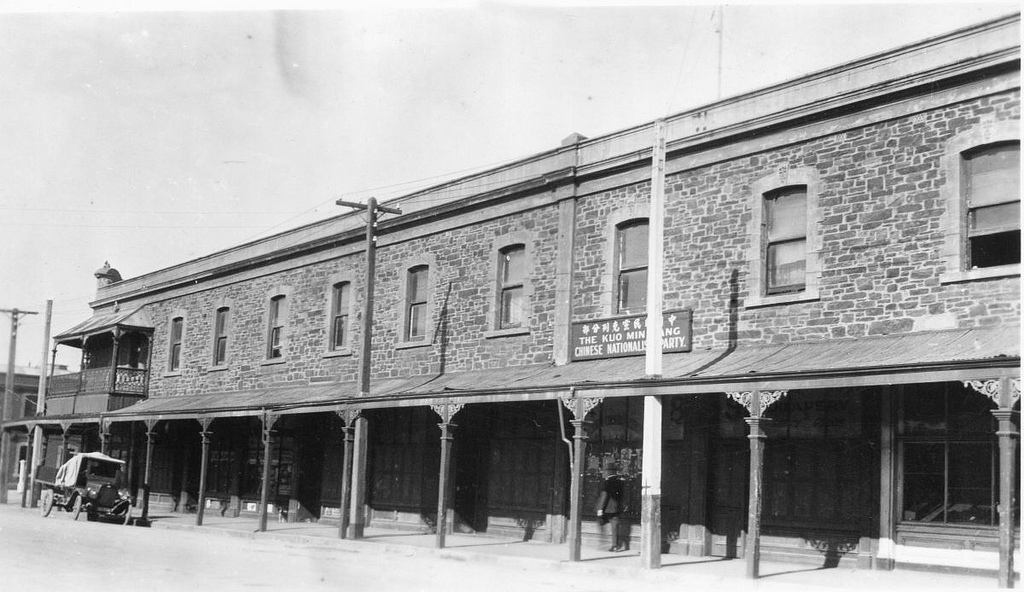 Hooker Building, Hindley St. frontage: B 3726
View more information about this image here. No known copyright restrictions – conditions of use.

In 1874 James Hooker set up a successful boiler making and ironwork foundry in the West End. He later bought up a row of shanties and erected a new two storey building on the south-west corner of Hindley and Morphett Streets. This was divided into thirteen separate shops, designed to double as residences. Hooker, a staunch Christian, aimed to support and save the area’s poor. On the Morphett Street side stood the Salvation Army's first South Australian base, whose offices were in Hooker's buildings.

However by the early 1900s Hooker’s buildings were being used for very different purposes. Gambling, drugs and prostitution remained a fact of life. Anecdotal reports suggest that Hindley Street housed a number of opium dens. The Register of 17 March 1909 reported a police raid on no. 10 Hooker’s Building in which opium smoking equipment, thousands of ‘pak a pu’ or Chinese lottery tickets, and a large amount of cash, were found. Opium and gambling raids continued through the 20s and 30s, often without a successful conviction.

But gambling was not confined to the Chinese. Two-up flourished as did illegal betting in hotels, which in 1918 numbered 59 in the West End alone. Alleged local criminal figure Arnold 'Treacle’ Fimeri leased part of the Hooker building in which his brother conducted a betting shop. In 1942 a triple murder occurred on this premises. Three men were bashed to death and a fire lit to cover the crime. No-one was convicted but prime witnesses George Bray and Allen George Coffey refused to give evidence on the grounds that they might incriminate themselves. (The Advertiser, 1 Jan 1943, p. 3)

Insidious temptation at the Central Market 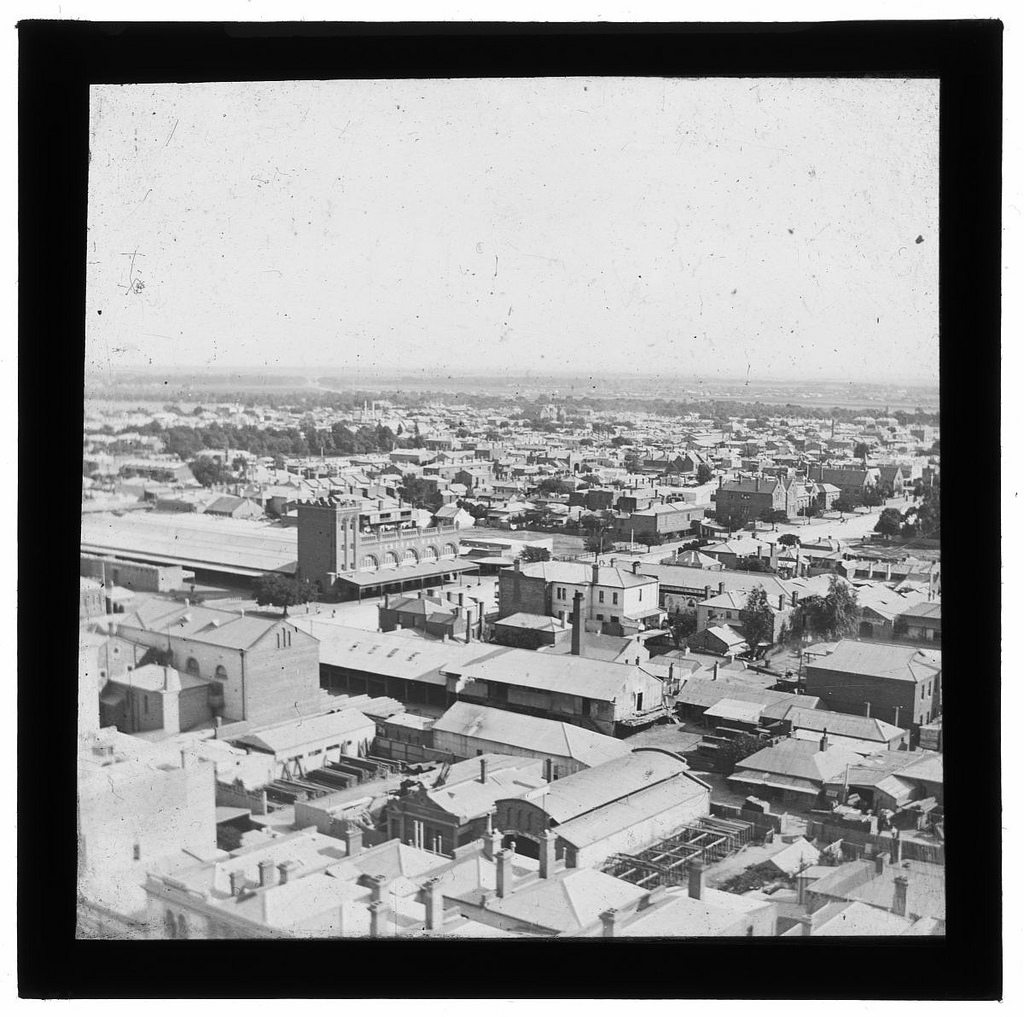 Looking down over buildings in the centre of Adelaide including the Central Markets: PRG 1316/12/233
View more information about this image here. No known copyright restrictions – conditions of use.

With its crowds of unsuspecting shoppers and nearby pubs, the area attracted numerous pickpockets, drunks and thugs. In 1898 the ‘Central Market Case’ made headlines. Three men were eventually arrested by Detectives Garland and Mitchell for the late night ‘highway robbery’ and attempted garroting of Walter Coddling next to the market. (The Advertiser, 16 July 1898, p 5).

In the 1920s the Mail (24 April 1926, p 15) reported that the youths and men who regularly congregated at the Central Market were the closest thing Adelaide had to a larrikin push. However this was not seen as particularly menacing.

By 1907, South Australia's stringent gambling laws meant that low-stakes betting on darts, billiards, bagatelle, lucky dips or any games of chance could now lead to arrest. A letter from ’anti-gambler’ (The Register, 14 July 1908, p 9) complained about the ‘insidious temptation to gamble’ on the small prize lotteries run by the Market’s ‘leather-lunged cheapjacks’. In 1923 the proprietor of a darts game was fined ten shillings (the Register, Tuesday 29 May 1923, p 13). In the 1930s (The Advertiser, 5 Sept 1936, p 10) a stallholder was charged for running a game of bagatelle. Many Adelaidians viewed these prosecutions as petty and a complete waste of police time.

This tour has been developed by staff of the State Library of South Australia with information sourced from:

The cruel city: is Adelaide the murder capital of Australia?, Stephen Orr,

Photographers have been credited where they are known. Please contact us if you have any additional information about any of these photographs.