Darkness in the City of Light: Walking tour: Gambling and prostitution

The Saddling Paddock : fallen women in their finery 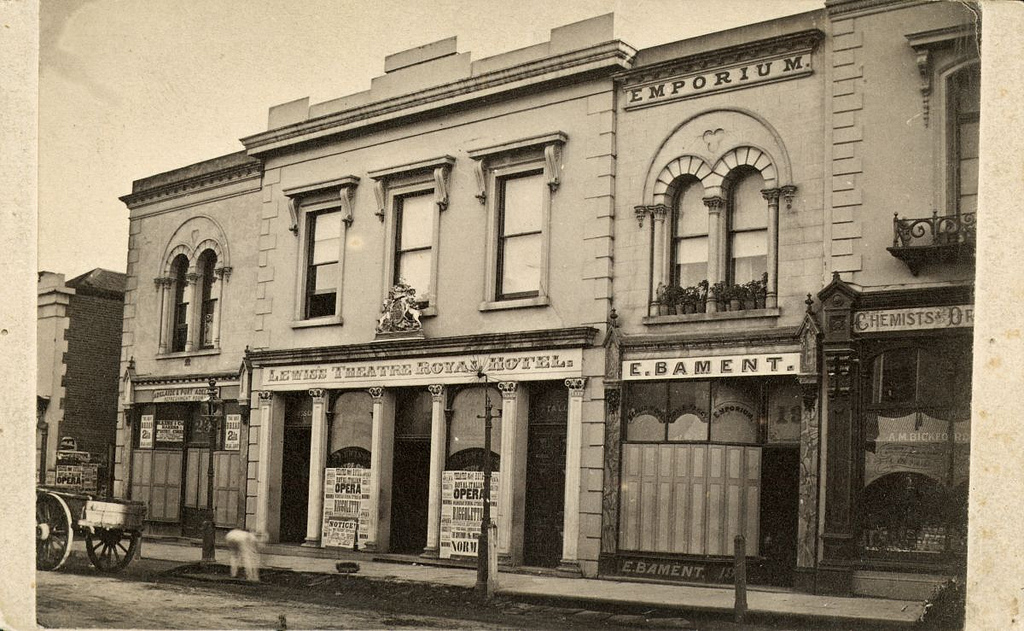 Theatre Royal Hotel, Hindley Street: B 1012.
View more information about this image here. No known copyright restrictions – conditions of use.

In the late 1870s the ‘Midnight Rambler’ (The Register, 20 Jan 1879) took a walk on the dark side. Alongside the Superintendent of Police and a detective, he stepped out one Saturday evening to view the ‘abandoned women and dissolute men’ who patronised the West End’s most disreputable public-houses.

First stop that hot January night was the Theatre Royal Hotel’s infamous ‘saddling paddock’, so called because it was a meeting place for high class prostitutes and their customers. The 'paddock' was where Adelaide’s ‘fashionable class of fallen woman’ congregated to show off their latest finery and admirers. Although scandalous and immoral, these ‘gaudily dressed women’ in satin and silk were considered a different and more attractive class than the prostitutes found in the poorer, more sordid public houses.

The ‘paddock’ was the Theatre Royal’s back bar, measuring about 15 by 20 feet (approximately 5 by 8 metres). There was no seating, only a counter at one end where drinks were served. Its clientele was strictly segregated from those patrons who gathered in the hotel’s front area, and barmaids were not allowed to serve or enter the back bar for fear that they would be corrupted. There was widespread fear that the back bar (and the rumours of what went on in the hansom cabs parked nearby) would also defile the many eager young men it attracted.

By 1905 the notorious ‘saddling paddock’ was gone. The Theatre Royal, built in 1868 and renovated in 1914, remained a landmark until 1962 when it was demolished to make room for Miller Anderson’s store car park.

The Circus is in town : Shamrock Hotel 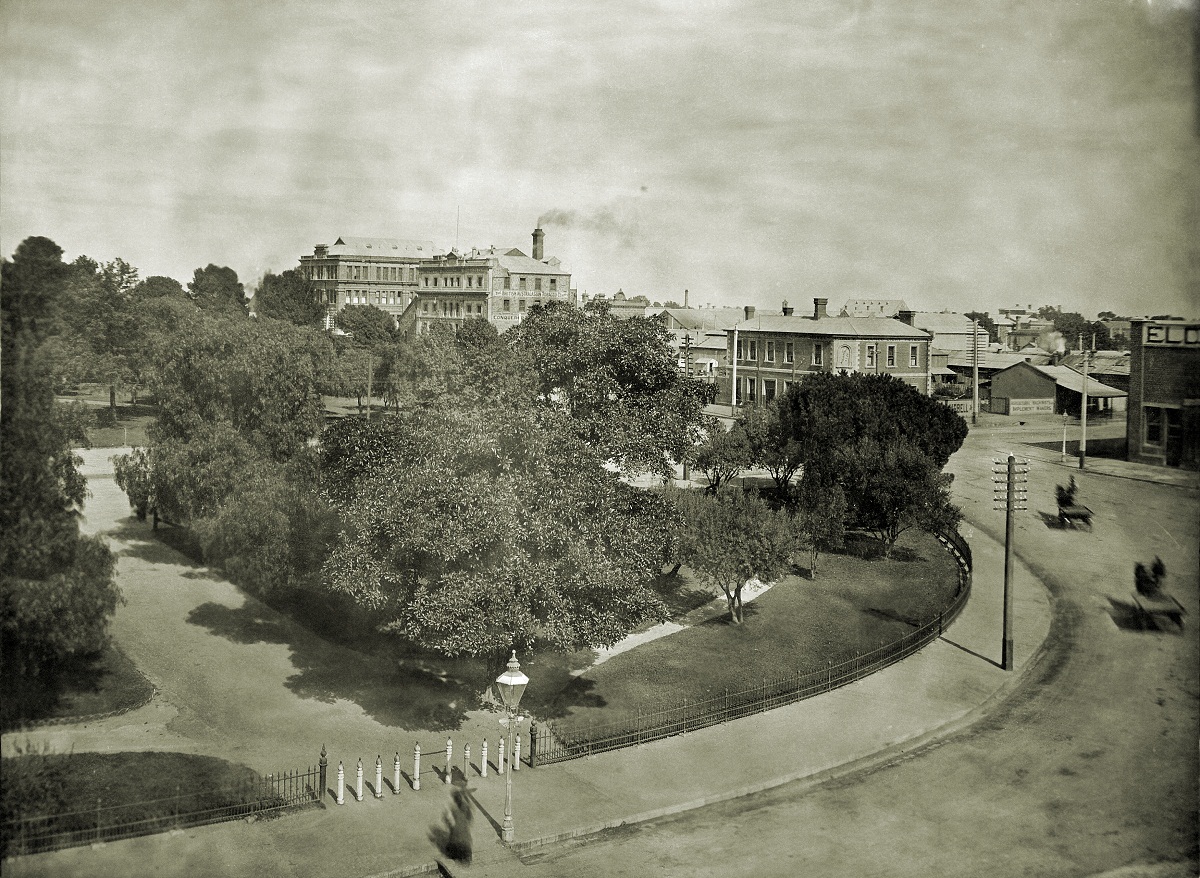 Shamrock Hotel (upper right): B 2153
View more information about this image here. No known copyright restrictions – conditions of use.

The Shamrock Hotel, in all its incarnations, had a notorious reputation in an area renowned for its alcohol consumption, gambling and altogether loose morals. Much of the moral condemnation of the time however, was centred around prostitution, and the Shamrock featured prominently. Thomas Boddington was the landlord of the hotel from 1867 to 1888, and he also owned a series of tenements conveniently located beside the hotel, colloquially known as Boddington's Row. These houses were rented at an unusually inflated price, to prostitutes and their clients. The row attracted a lot of violence and crime and even the occasional murder.

With so many licensed venues to choose from at the time, the Shamrock had to distinguish itself and it did so with the circus acts it provided almost nightly to its patrons, featuring music hall artistes, strongmen and acrobats. However not all the citizenry were amused. The owner of an adjacent building, chiefly concerned about the depreciation in value of his property, asked in an anonymous letter to the Register of February 15, 1883  "...why the police and the Bench allow this foul den, the chief customers of which are thieves and prostitutes, to exist in the centre of a respectable city." Despite the disquiet of the community the Shamrock continued to have its license renewed annually but eventually cleaned up its act and changed its name to the Colonel Light Hotel in 1888. 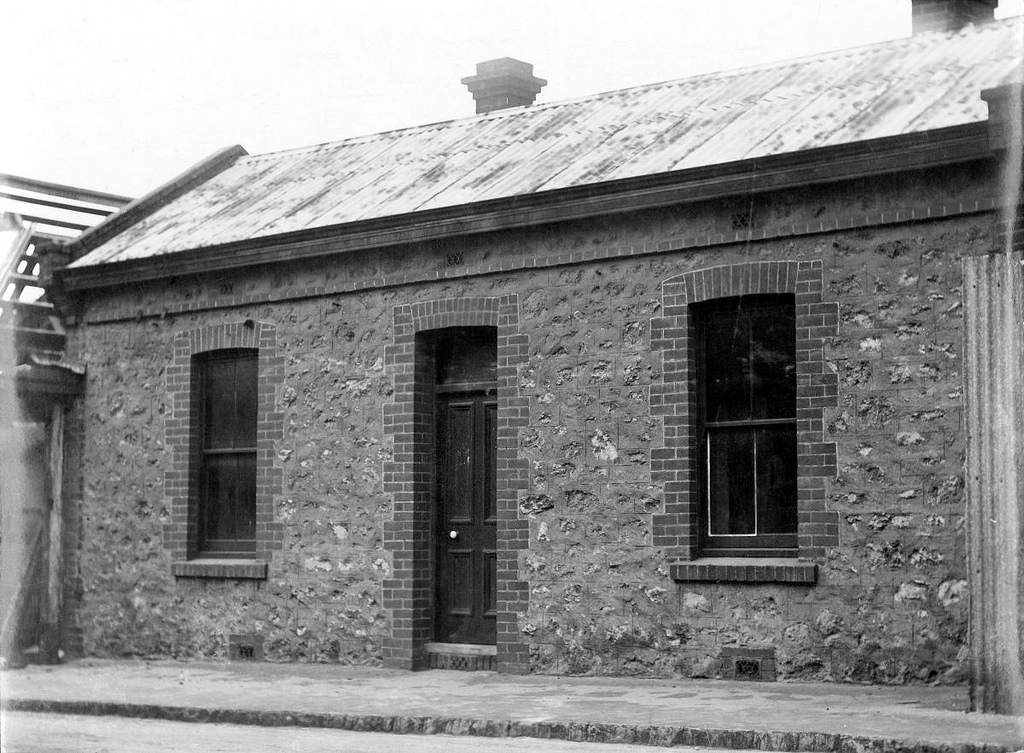 Solomon Street cottage: B 315
View more information about this image here. No known copyright restrictions – conditions of use.

In the early 1850s West End residents were so angry about the lack of police action over local prostitutes that they placed a notice on the front page of Adelaide's daily papers. It was headed  'Rosina Street Monster Brothel and Sly Grog Shop' and went on to announce that prominent members of the police and judiciary  were 'numbered amongst its most constant frequenters' (Mercury and SA Sporting Chronicle 17 May 1851).

Prostitution was well established from the first decade of the colony’s beginning in 1836. Brothels operating openly, particularly in the north-west slums around Light Square. Numerous public hotels (pubs or ‘pubberies’) and sly grog houses provided a meeting place for known criminals, prostitutes, and the unemployed pimps or ‘bludgers’ who lived off their earnings.

It was a brutal life. Women were constantly exposed to drunkenness, drugs, disease and violence, and of course arrest. Abuse at the hands of pimps and customers was a daily hazard. Those who survived usually ended their lives in poverty.

By the 1900s the brothels had started to move away from Rosina Street and Light Square. By 1925 they had gone from the north-west to the south-west of the city, mainly located around Sturt Street. (McDougall and Vines,The City of Adelaide, a thematic history, 2006, p 49). Today the houses are gone and Rosina Street consists only of TAFE SA's brick wall and car parks.