The end of the First World War created new priorities for Australia and the Red Cross.

Where many believed  peace would bring an end to their Red Cross work and sought permission to dispose of their funds, Lady Galway, President of the South Australian Division of the Australian Red Cross, two weeks before the end of the war wrote, "What must we do when peace really comes? Can we then stop our work, disband, or take some other corporate interest? The answer is perfectly clear and simple: if the war ended to-morrow, we shall have at least two or three years of Red Cross work to do. The only difference is this, that with every ship that brings home sick and wounded men, our work will be more and more in Australia instead of as now in England, France, and Egypt.... It would be very unwise for the members of any circle formed for the purposes of the Red Cross to bind themselves to do any other work." The Advertiser newspaper 29 October 1918, page 6.

Response to the Influenza Epidemic. Following the acceptance by the Central Board of Health of a general offer of assistance from the Red Cross the Executive of the South Australian Division sought suggestions as to "the manner and extent to which the organisation and resources of the Society maybe used with dealing with the demands made upon the Health Authorities by the influenza epidemic". The Red Cross Record, February 1919.
By July 1919 113 Voluntary Aid Detachment volunteers were working at the Exhibition Infectious Hospital, the Quarantine Station, country hospitals and in private homes. Over 226 households and 595 patients were helped but 18 VAD's became ill themselves.

Junior Red Cross. A meeting was convened by the South Australian Division on 23 September 1925 for the purpose of forming a Junior Branch of the Red Cross Society. The Junior Red Cross was organised in similar style to the Red Cross with 'Circles' being established to raise money and make garments and toys for distribution to hospitals. By August 1928 there were twenty seven circles, ten of which were in country schools. 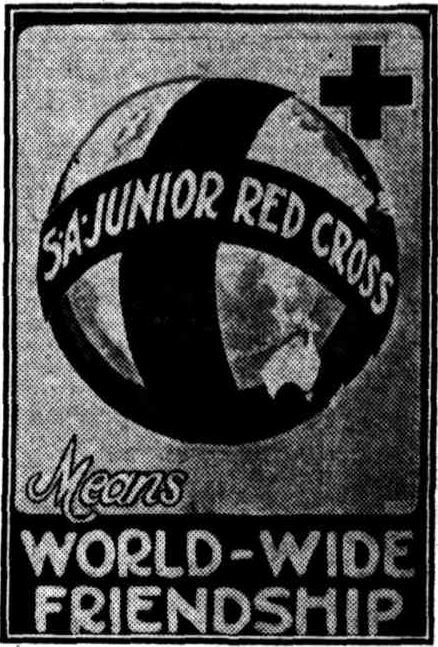 Winning poster in the Junior Red Cross Society poster competition by Ainslie Roberts. He also won a scholarship at the Adelaide School of Arts and Crafts.