There is a temptation for many family historians to want to lay claim to a Coat of Arms for their family name. However, an understanding of Heraldry and its rules of application are necessary before any such usage can be correctly made.

Heraldry began in the 12th century, probably in response to the wearing of helmets with armour, which made recognition of leaders more difficult. Use of a coat of arms on a banner, shield or coat made distinguishing between men in armour possible. Heraldic bearings became hereditary as the son of the original feudal lord retained the original pattern to guide his followers into battle.

Coats of Arms can be found in many European countries, including Poland, Hungary, France and Germany. However, the information below applies largely to Great Britain. Rules of heraldry vary between countries.

Armorial bearings usually belong to an individual, and usually may rightfully be used by the male-line descendants of the individual to whom they were granted or first allowed. In this way, not everyone with a particular surname can lay claim to the use of a coat of arms. It is necessary to trace one's male-line ancestry back as far as possible and then examine the official records of the heraldic authority concerned.

Prior to the 16th century heraldry was unregulated in England. In the early 16th century, Henry VIII became the first to formalise things by sending out his heralds to create lists by visitations to members of the gentry and nobility throughout the shires of England. By the 17th century, the Law of Arms had evolved to the point where only arms granted or confirmed by visitation were lawful.

The authority on heraldic grants, (they can still be granted today) for: 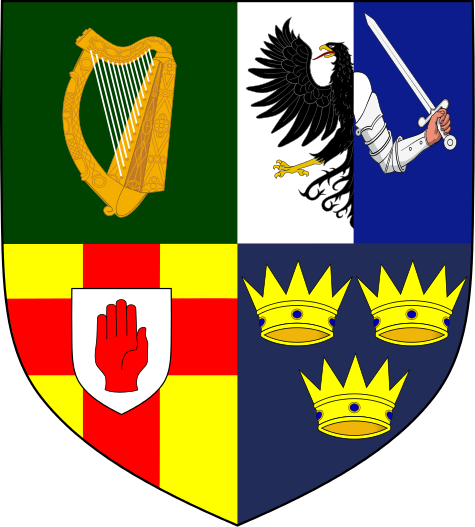 The traditional arms of the four provinces of Ireland quartered to form the popular arms of Ireland.

Ireland and it's Heraldry

The Library holds an extensive collection of books on heraldry. These can be found by searching under the subject Heraldry in the Library's catalogue database.

The books listed below may help trace a Coat of Arms or explain what the symbols, colours and markings mean.