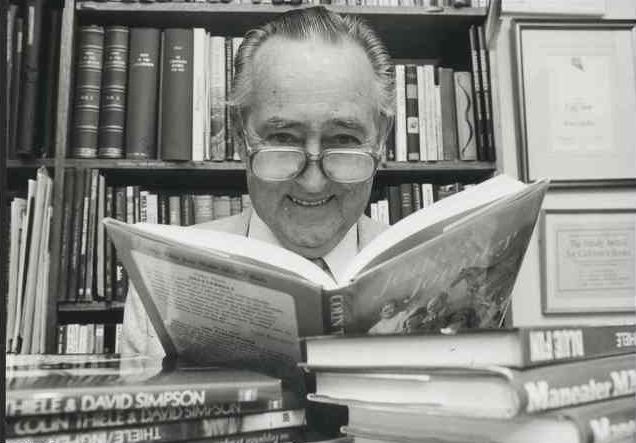 This image is in copyright.
Do not make copies without the permission of the copyright owner.

Colin Milton Thiele was born in South Australia on 16 November 1920 and lived about 12 kilometres northwest of Eudunda. He was the grandson of Prussian pioneers who had arrived in SA in the 1850s.

A bright student, Colin attended Kapunda High School, then the University of Adelaide. He was a Lutheran Seminary Boarder whilst studying for an arts degree, eventually deciding upon a career in teaching. After a short time as a junior teacher for the SA Education Department, Colin joined the RAAF. In World War 2 he served as a Corporal at Darwin, Melville Island, Townsville, Cape York and New Guinea but Colin acknowledged he was never involved in the worst of fighting. During the war he met teacher Rhonda Gill whom he married in 1945. Because of a shortage of teachers, Colin's demobilisation after the war was rapid, and he went to teach at Port Lincoln after an introductory stint at Unley High School.

In 1945 Colin's first two books,volumes of poetry titled Progress To Denial and Splinters And Shards were published by the Jindyworobaks. In Port Lincoln, radio played an important part in his life and subsequently two of his scripts won the 1951 Commonwealth of Australia Jubilee Federal Arts Competition: Edge Of Ice (play script) and Golden Tide (documentary).

Subsequently Colin and Rhonda had two daughters, moved back to Adelaide and enjoyed successful teaching careers. Colin became the head of the Wattle Park Teachers' College. He became severely afflicted with arthritis which he tolerated with great stoicism and good humour. Meanwhile, his creative success brought recognition.

He was also an acknowledged early spokesman for the environment. In 1997 the Wilderness Society gave him the Environmental Award for Children's Literature, for his contribution to environmental writing in Australia. After retirement, Colin and his family settled just north of Brisbane at Dayboro. There he enjoyed a rural life until he died in 2006.