Kingston, George Strickland. To her most Gracious Majesty Adelaide, the Queen Dowager, this map of Adelaide, South Australia; shewing (sic) the nature and extent of every building in the city, as surveyed and laid down by G. S. Kingston Esqr.
Scale [ca 1:2,259].  London, J. C. Hailes, 1842.
Shows acre numbers and streets; owners' names are shown on some city acres. Includes sketches of 6 public buildings, list of 17 buildings in North Adelaide and 98 buildings in South Adelaide, and memoranda on South Australia. Widely known as the 'Kingston Map'or the 'Queen Dowager map'.

Light, William. Plan of the city of Adelaide, in South Australia : with the acre allotments numbered, and a reference to the names of the original purchasers.
Scale not given.  [London] : House of Commons, 1838 (James and Luke G. Hansard & Sons, Printers).
This map is based on an original 1837 plan surveyed and drawn by Colonel William Light, the first Surveyor-General for the Colony of South Australia.

Light, William. Plan of the city of Adelaide, in South Australia : with the acre allotments numbered, and a marginal reference to the names of the original purchasers.
Scale not given.  [Adelaide, S. Aust.] : John Gliddon, SA agent, [1840].
This map is based on an original 1837 plan surveyed and drawn by Colonel William Light, the first Surveyor-General for the Colony of South Australia.

South Australia. Surveyor General's Office. Survey and plan of the city of Adelaide; prepared in connection with the drainage of the city and for information of the Land and Title Office...work started by Mr Hyndman and carried out by C. W. Smith.
Scale 80 feet to an inch.  Adelaide, Surveyor General's Office, [1880?].
This map includes names of buildings, and is widely known to as the ' Smith's Survey' after Charles W. Smith [City Engineer].

Gazetteers list place names and give geographical locations and sometimes information on sources of names. There are many useful gazetteers held at the Information Desk or nearby on the Ready Reference shelves. The following sources provide information on South Australian place names

Whitworth, Robert P. Bailliere's South Australian gazetteer and road guide: containing the most recent and accurate information as to every place in the colony. Facsimile of: Adelaide: F.F. Bailliere, 1866. Ridgehaven, Gould Books, 1991.

How to view maps

The resources listed on this page are held in the State Library collection. Maps may need to be ordered from storage and used in the library.

Digital copies of some maps are available on the State Library's Digital Collections website. 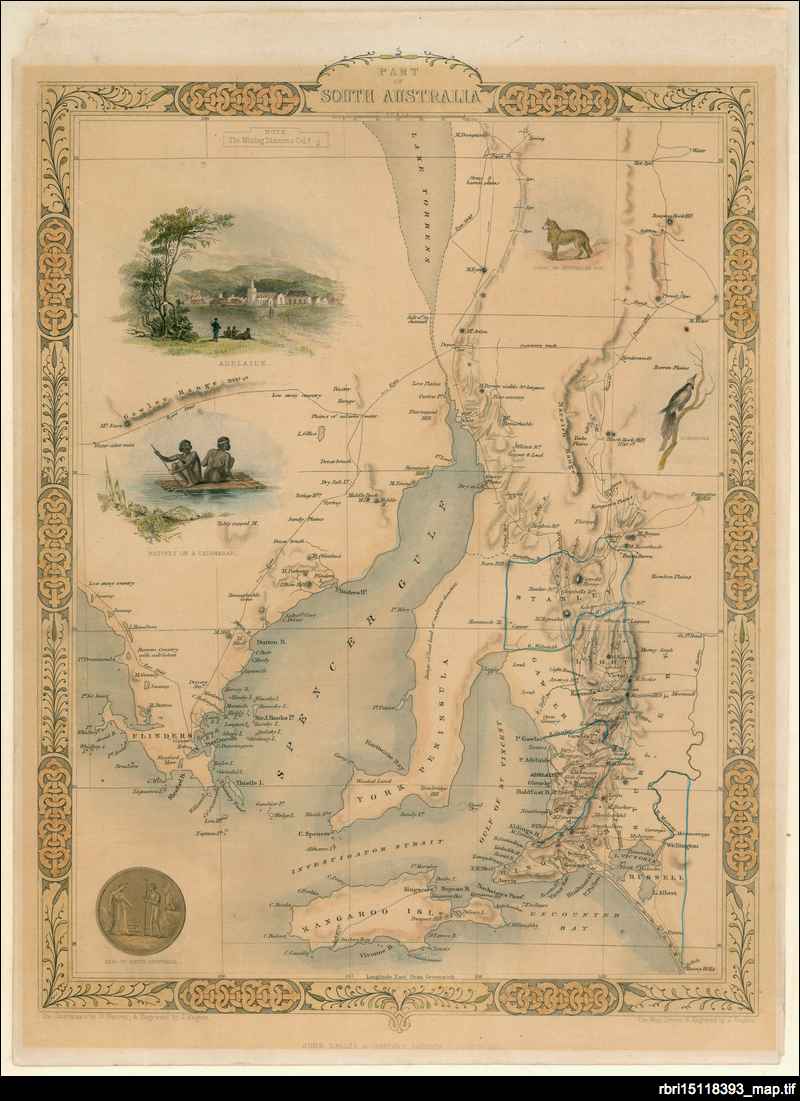 Part of South Australia, J. Rapkin 1851
View more information about this image. You may order a high quality photographic copy. No known Copyright restrictions - Conditions of use.

Edmunds William Herbert. Road plan of Adelaide Hills from Morialta Falls in the north to Mylor in the south.
Adelaide: WH Edmunds 1938

Gregory's Street Directory This digitised 1936 edition is the first of this title and shows tram and train lines and municipal boundaries. An index to localities and their page references starts on page 9.

South Australia. Surveyor General's Office. Map of country between Adelaide and the sea coast for military purposes.
Scale 1:20 000.  Adelaide, Surveyor General's Office, 1882.
Shows the areas from Torrens Road to the Glenelg tram, shows some owners of property and locality names. This map was drawn by Royal Engineers and used to site coastal defences in the 1880's and subsequently used as a base map for the 1914 edition of the Adelaide map at the 1:63 360 scale

Stephenson, Robert. Map of the county of Adelaide and surrounding districts : prepared from the Government plans and carefully revised after the newest surveys by Robt. Stephenson, surveyor, Exchange Colannade.
Scale [ca. 1:140 000].  Adelaide, Penman & Galbraith, 1850.
Shows sections sold in Districts A, B, C, D, E & F and the Special Surveys.

Digitised Hundred maps can be located via this index.

There are several ways to find the name of the hundred map covering your area of interest.

1. By using the State Government’s SAPPA (Property & Planning Atlas) website. Top right is the Search for an Address or Location box. Type in your locality, and then right click on the map to bring up information for that location (including relevant Hundred).

2. The Location SA Map viewer does much the same thing. Top left of the page use Search for an Address or Location. Then on the right hand Menu, click on Datasets, then Land Management, then Boundaries, then tick Hundred. Click on the map to get the Hundred information.

Flinders, Matthew. Chart of Terra Australia Sheet III, South Coast.
Scale [ca. 1:930 000].  Facsimile ed.  [Adelaide : Libraries Board of South Australia, 1966].
Chart of the coast of South Australia from the Head of the Australian Bight to Encounter Bay showing the track of the 'Investigator', 1802 and including the area of the 1802 encounter between Baudin and Flinders at Encounter Bay. Originally published 1st Jan. 1814 as Plate IV of Flinders' A voyage to Terra Australis.

Higginson, H.  This map of the settled districts of South Australia : to the Hono[ura]ble the Surveyor-General, Arthur Henry Freeling is most respectfully inscribed by his obliged and obedient servants H. Higginson and John W. Painter.
Scale [1:1 000 000].  London, Vincent Brooks, 1855.