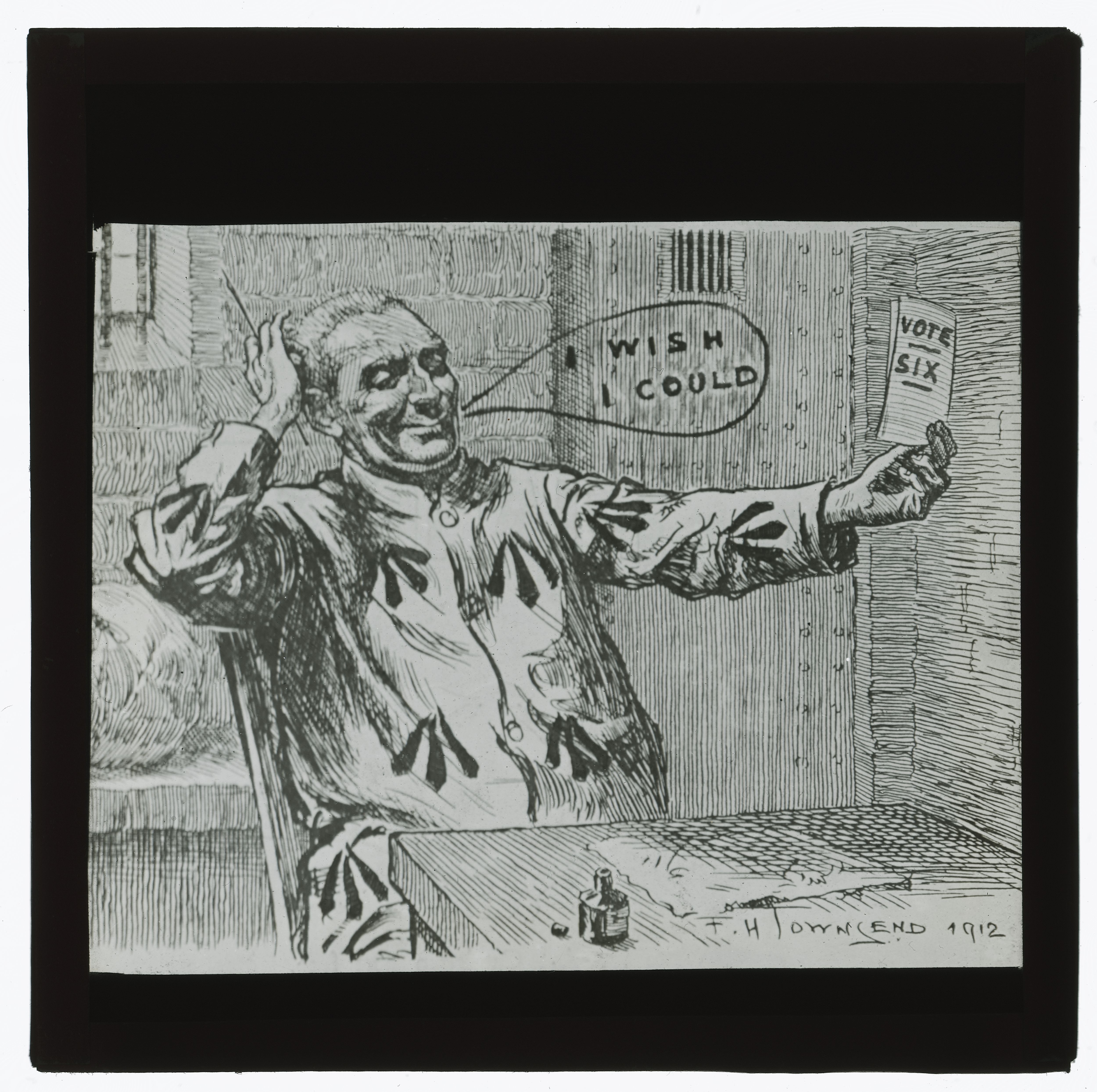 Artist FH Townsend used a stereotypical image of a convict during the 1916 campaign to close hotel bars at 6 pm.

The end of the Napoleonic Wars, and the Industrial Revolution, brought high levels of unemployment and poverty in their wake. This in turn led to an increased crime rate as many struggled simply to survive  - as well as the small proportion of the population who were always criminally minded.

English law at the time was harsh, with more than 200 crimes punishable by death.

Prisons were overcrowded, so initially the British government made use of decommissioned naval ships as floating prisons. (Later South Australia had a floating boys' reformatory, the Fitzjames.)

"Transportation" - the sending of convicted criminals into exile in British colonies - actually began in the 1600s, when the first convicts were taken to America and the West Indies. The discovery of Australia in 1770 provided the opportunity to send criminals to the most distant land then known.

A person convicted of a capital punishment (a crime punishable by death) could have the sentence converted to fourteen years in a penal colony. Those convicted of a non-capital offence could have the sentence converted to seven years. However, very few convicts ever returned to Britain, and in fact usually had the opportunity for a better life in the new land.

The First Fleet,  eleven convict ships under Australia's first governor (Arthur Philip) left Portsmouth on 13 May 1787 and arrived at Botany Bay on 26 January 1788 - the date now commemorated as Australia Day.

There were about 778 convicts - mostly men - in this group. Finding Botany Bay unsuitable for a colony, the settlement moved north to Port Jackson - modern day Sydney.

Subsequently other penal settlements were established at Norfolk Island and in Queensland, Tasmania and Western Australia. By the end of the convict era approximately 160,000 men and women had been sent to Australia.

South was an experimental British colony and the only Australian colony which did not officially take convicts.

But naturally some former convicts made their way to South Australia. Men who had completed their sentences came to settle here, usually hiding their convict past if possible. This ranged from prosperous shipping agents such as Emanuel  Solomon, down to farmers in the Adelaide hills and around the south coast.

Criminals  convicted of major crimes in South Australia were sent as convicts to the eastern colonies until 1851. An index to these l is available on the Find My Past database - (available in the Library, or by private subscription) and on the Family History website created by Graham Jaunay.

General information about South Australian convicts sent to the other colonies is also found in, SA convicts sentenced to transportation 1837-1851 by Graham Jaunay (1995).

When Xenophon Basham of London was convicted for passing a forged banknote and sentenced to be taken to Tasmania as a convict, his wife and children followed him.

The family became successful farmers, and in 1838 son William Basham, with his wife and children, settled in South Australia. He established a prosperous farm at Hindmarsh Valley, and later was the owner of a paddle steamer and a flour mill.