A new game of the gold fields of Australia c1856
The Crystal Palace game: a voyage round the world c1854 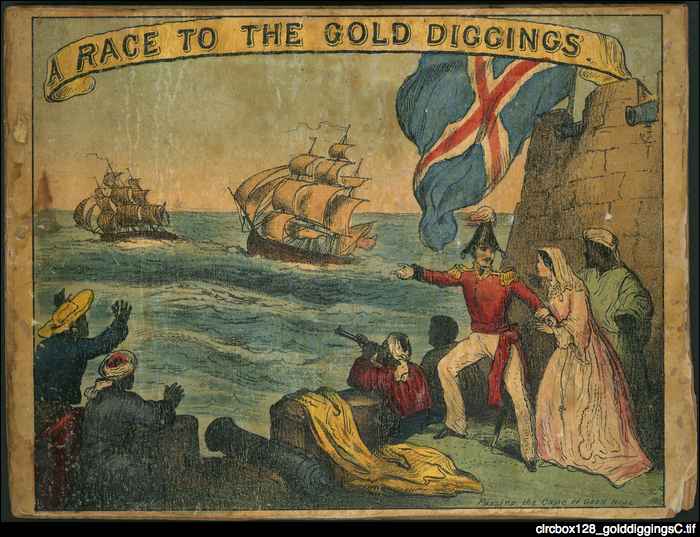 Race to the gold diggings [1850-] Copies of this image may be used for private research/study. You may order a high quality photographic  copy. Any other use requires permission from the State Library of South Australia.

Eyre, Edward John. Journals of expeditions of discovery into Central Australia, and overland from Adelaide to King George's Sound, in the years 1840-1 : sent by the colonists of South Australia, with the sanction and support of the government : including an account of the manners and customs of the aborigines and the state of their relations with Europeans London : T. and W. Boone, 1845. In its original binding

Chase, Owen. Narrative of the most extraordinary and distressing shipwreck of the whale-ship Essex, of Nantucket, which was attacked and finally destroyed by a large spermaceti-whale, in the Pacific Ocean : with an account of the unparalleled sufferings of the captain and crew during a space of ninety-three days at sea, in open boat, in the years 1819 & 1820 New-York : W.B. Gilley, 1821. The inspiration for Moby Dick

Benjamin Hutchison of Wayville was an Adelaide bookseller who bequeathed the bulk of his considerable estate to be divided equally between the State Library of South Australia, the Flinders University Library and the Barr Smith Library at the University of Adelaide. The bequest was made in 1996 with the State Library receiving some $260,000.

A regular user of the Library's Rare Book Collection during the 1980s, the only stipulation of his bequest was that the money be used for the purpose of purchasing 19th century publications.

Mr Hutchison also produced a number of bibliographies on writers such as Guy Boothby, Rolf Boldrewood, Ada Cambridge and others. He also published Bookman's monthly.