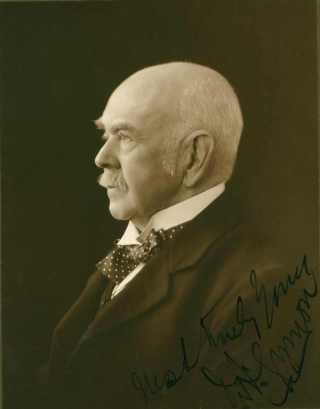 B 3988 : Sir Josiah Symon photographed in 1919. View more information about this image. No known copyright restrictions Conditions of use

Sir Josiah Symon (1846-1934) was born in Scotland and migrated to South Australia in 1866. He was called to the South Australian Bar in 1871 and became Attorney-General in a conservative government when he won the state seat of Sturt in 1881. Sir Josiah was the acknowledged leader of the South Australian Bar for over 30 years through his understanding of the law and skill as an advocate. His major contribution to Australian politics was in the area of Federation. He was a prominent member of the 1897-98 Australasian Federal Convention. He saw the major issues of Federation as equal representation of the states in the Senate; the solution of deadlocks between the two Houses of Parliament; the Murray River; and the establishment of an Australian Supreme Court to replace the Privy Council. The first three issues are still topical today, the fourth was resolved several years ago.

Sir Josiah was a person of broad scholarship. He wrote Shakespeare the Englishman in 1929, and was a member of several literary associations.

The library at Sir Josiah's Upper Sturt estate, Manoah, consisted of 10,000 law and literature volumes, reflecting his interests in Shakespeare, travel, history and biography. He bequeathed his collection (excluding approximately 2,500 law books), to the State Library where it remains an excellent example of a 'gentleman's library'. The terms of the bequest were that the books should not be marked or rebound, which makes it a useful source of examples of original bindings, particularly in pictorial cloth.

The collection also came with some shelving and furniture from Manoah, including the desk on which Sir Josiah worked on the Australian Constitution prior to Federation.

Read about Sir Josiah's library described in situ at Manoah in this article from The Chronicle, July 18, 1929.

Sir Josiah Symon's entry in the Australian dictionary of biography 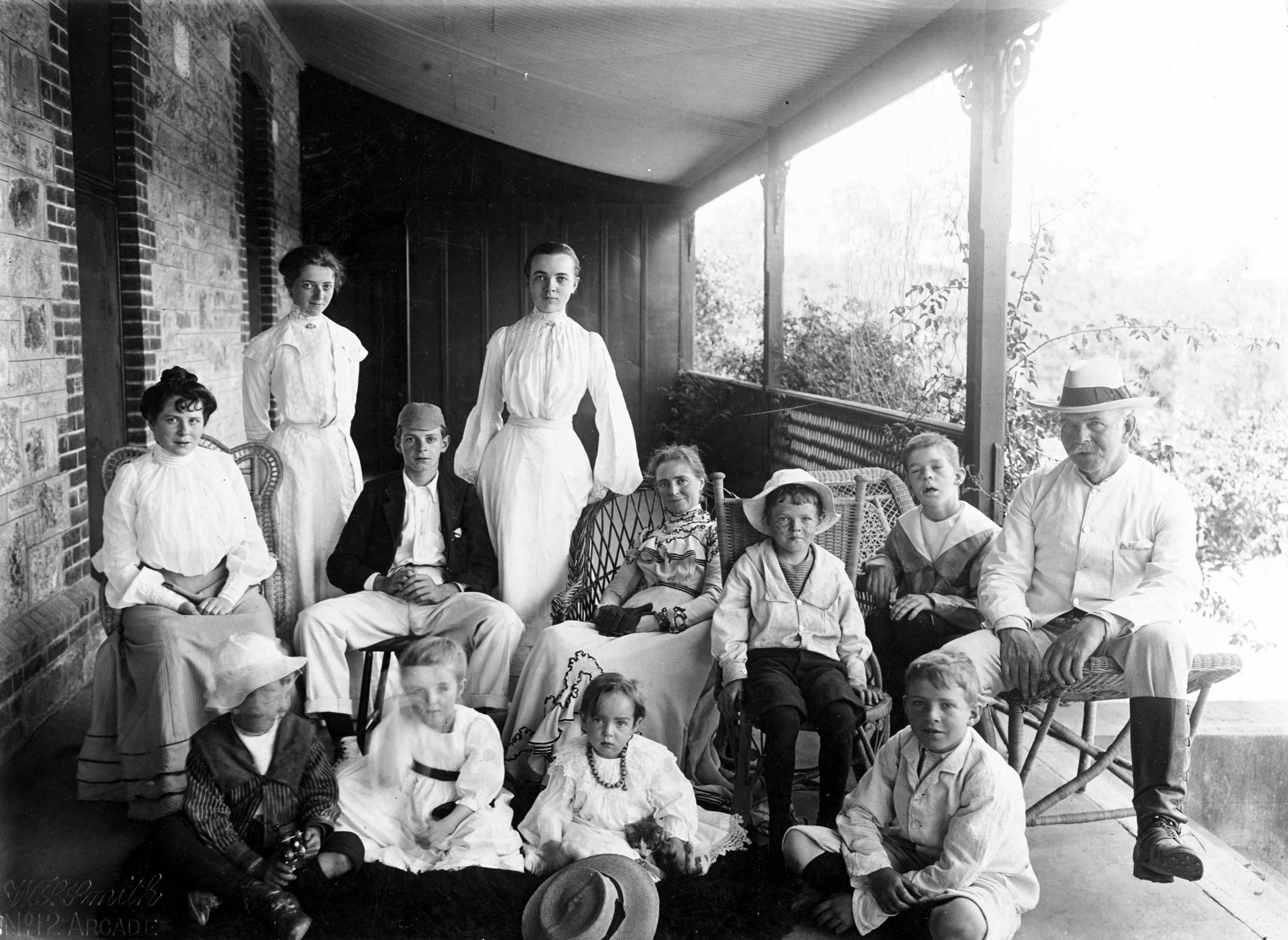 B 62727. View more information about this image. No known copyright restrictions Conditions of use

This 1903 photograph shows Sir Josiah Symon at the far right sitting with Lady Symon and members of their family on the verandah at 'Manoah' at Upper Sturt with their children Margaret, Mary, Lenore, Charles, Kilmeny, Romilly and Angel. In the Symon Library is the desk on which Sir Josiah worked on the first draft of the Australian Constitution.

The Symon Library is currently closed to the public due to COVID-19 restrictions.

Books from the Symon Library may be viewed in the State Library's Somerville Reading Room. Items can be requested via the catalogue and there is a 24 hour turnaround time. 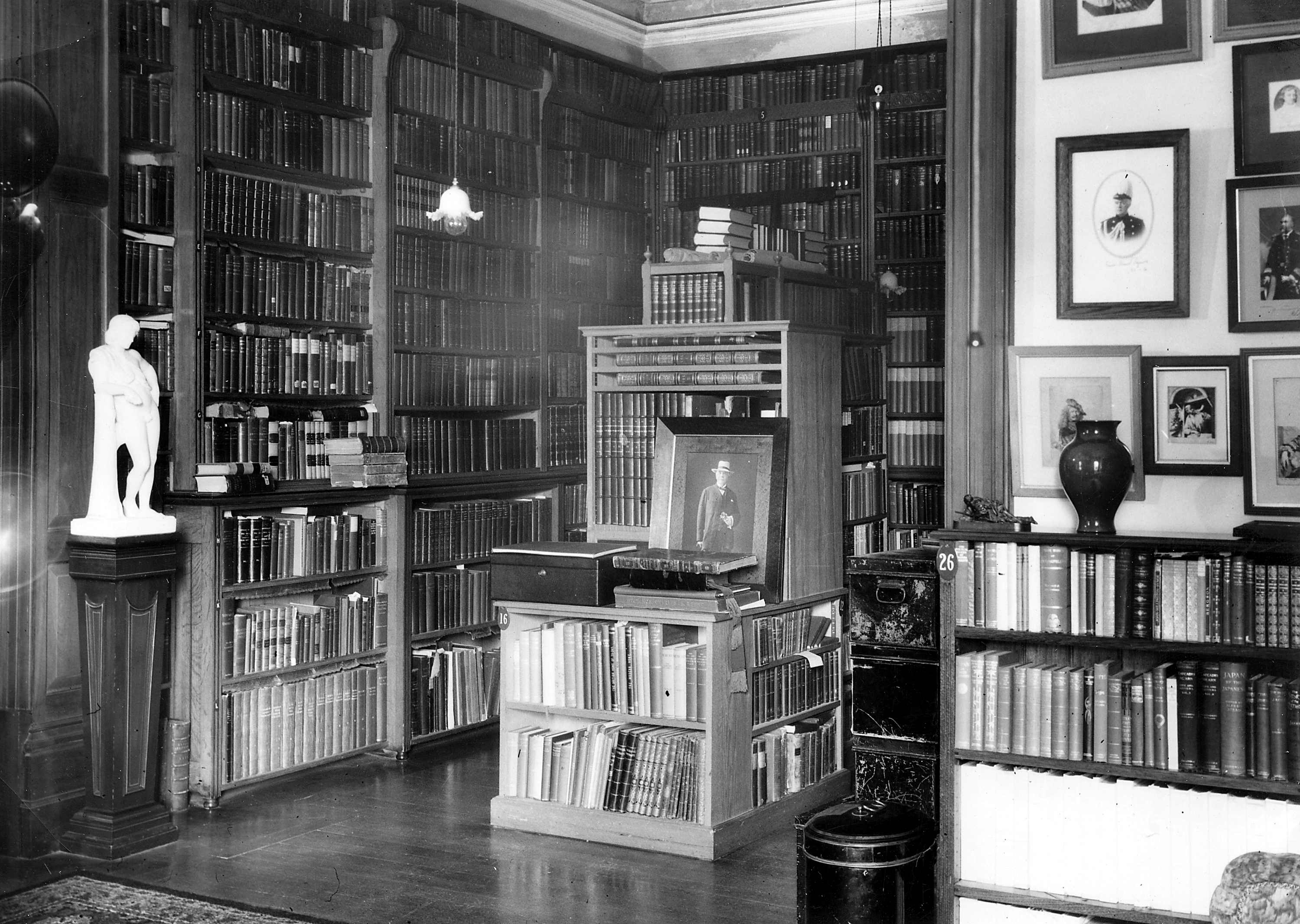 B 62728 Part of Sir Josiah Symon's library in 1895 at 'Manoah', his residence and estate at Upper Sturt. View more information about this image. No known copyright restrictions Conditions of use.

The Symon Library was officially opened at the State Library on 27 September 1935 with a speech by Lady Symon. 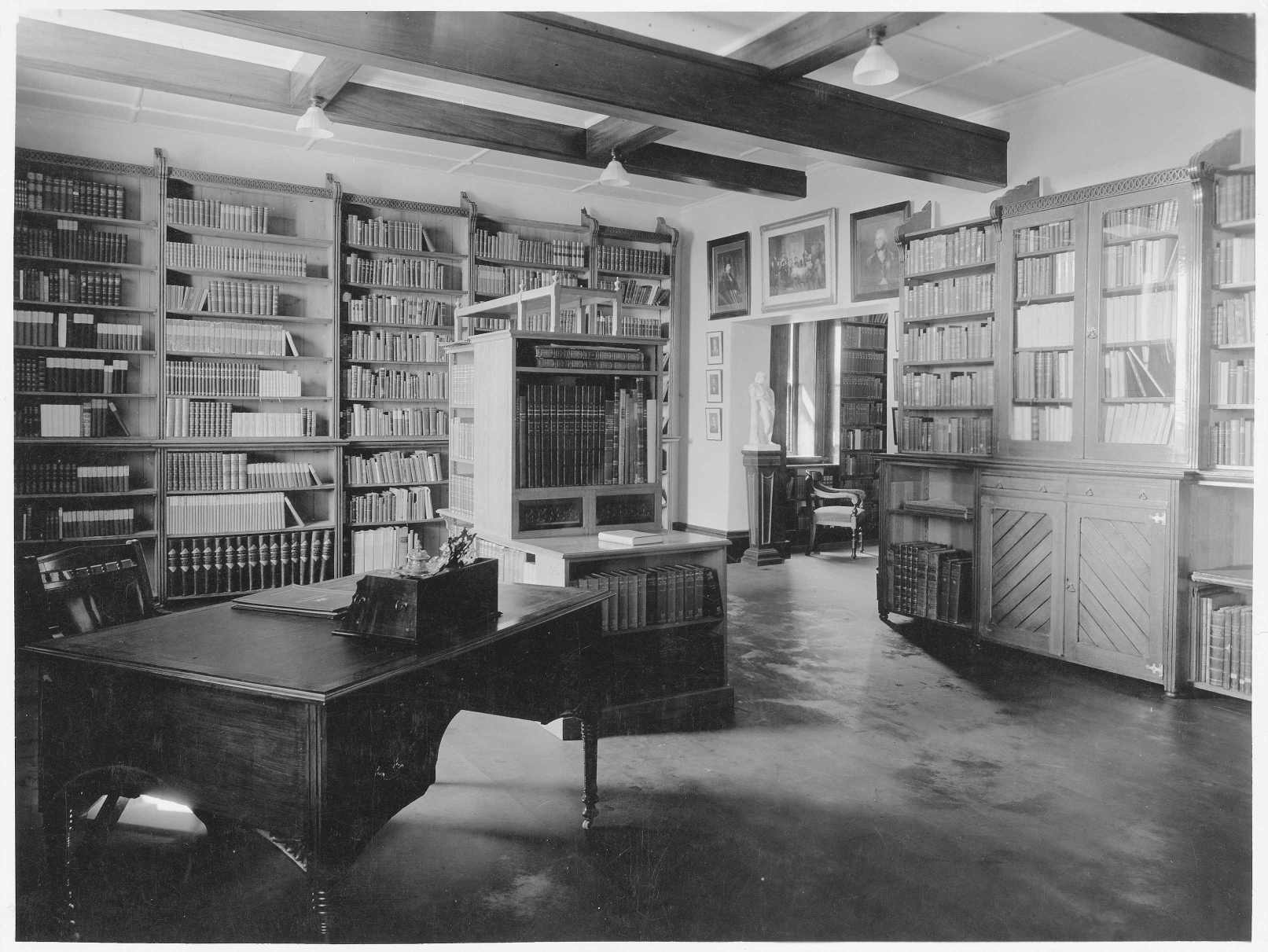 B 9263 The Symon Library at the State Library in 1935. View more information about this image. No known copyright restrictions Conditions of use

Sir Josiah Symon had bought  Auldana vineyard, adjacent to Penfold's Grange vineyards at Magill in 1887. It was here that the first Australian commercial sparkling 'Burgundy' was produced in 1893.

At that time Edmond Mazure was Sir Josiah's vineyard manager and in charge of production. Mazure (1864-1939), a Frenchman by birth, was the son of a vigneron from Burgundy. As a young man he worked for a short while at Clos Vougeot before acquiring practical experience in Spain. Arriving in Australia he worked for a couple of South Australian vineyards and in 1888 was in charge of the cellars at the Jubilee Exhibition.  He was then employed as Auldana vineyard manager.  Mazure pioneered the manufacture of sparkling wine on a commercial basis in South Australia. He was also a wine judge.

The State Library holds the papers of the Symon family comprising correspondence of Sir Josiah Symon and those collected by his widow Lady Mary Symon, publications by Sir Josiah Symon, biographical and genealogical information, photographs of the family and their properties at Manoah and Auldana, a Chinner caricature of Sir Josiah Symon (1923),plus papers collected by Miss Kilmeny Symon relating to her activities as secretary of Camp Libraries, Prisoner of War Help Committee, in London. The papers can be requested for viewing in the Library's Reading Room.

Sir Josiah Symon's correspondence, memoranda, notes, cuttings, publications covering every phase of his life: his legal practice, political career in SA, involvement in Federation and the Federal Conventions, and the Senate are held at the National Library of Australia.