The Children's Library of the Unitarian Church in South Australia was established in October 1859 'in the hope of exciting a taste for reading among the younger members of the congregation', and is believed to be the first Children's Library in Australia. The library opened with 109 books and 21 subscribers. In 1861 the annual report records an increase in the membership. It was also hoped that the Library 'will long continue to form a bond of union with those to whom the future of the Church will be entrusted'. The books for the Library were selected with great care 'as regards their doctrinal as well as moral tendency' but also combined amusement with instruction. The figures of usage recorded in the annual reports clearly reflect the library's continued popularity amongst the young members of the congregation. Catalogues of the Library were issued every few years and by 1877 it was self supporting and continued to operate successfully for many more decades. The library closed in 1969. 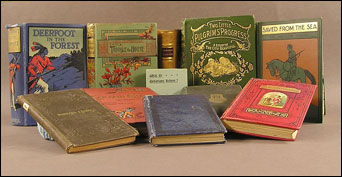 The Library of 700 books was donated to the Children’s Literature Research Collection in 1990 by Audrey Abbie, a former librarian of the Unitarian Church Children’s Library (UCCL), who preserved the collection in her home when it was no longer in use. The UCCL provides a rare glimpse of a functioning nineteenth century children's library.

In 2003 South Australian researcher Dr Barbara Wall (who had previously prepared a comprehensive bibliography of the published writings of Catherine Helen Spence) prepared an annotated catalogue of the UCCL in three sequences:

The UCCL collection held by the State Library is progressively being described in full on the catalogue. View a list of UCCL books catalogued to date. Dr Barbara Wall's annotated catalogue, reproduced with her permission, can be viewed in the documents below. The catalogue is divided into three sections. The first and by far the longest is the Catalogue of Books. The second is the Catalogue of Periodicals and Annuals, almost all of which have been bound by the publishers into book form. The third section is the Catalogue of the Teachers' Library, Travelling Library, and Books for Use in Sunday School and Church. Some of these books were part of the early children's library and were transferred later.

Origins of the collection

1859, some women of the Unitarian Christian Church in Adelaide, which was by then five years old, decided to establish a juvenile library, in the hope, they said, of 'exciting a taste for reading'. The library was not originally a Sunday School library-it preceded the foundation of the Unitarian Sunday School by two years. Some books indeed were professedly religious books but the greater number were believed to 'combine amusement with instruction'. The library, with books constantly added or withdrawn, was in use for 110 years and then in storage for another 21. The collection of books which remained at the end was donated to the Children's Literature Research Collection in the State Library of South Australia by the Unitarian Church in 1990. This catalogue lists these books and at the same time all those books which were part of the collection in earlier years.

Unitarian Church, Wakefield Street, north side, September 6th 1904, the site of Sunday school is 17 yards west of Gawler Place (B 5376). Copies of this image may be made for private research/study.  You may order a high quality photographic copy. No known Copyright restrictions - Conditions of use.

The library began with 109 volumes, some of them donated by members of the congregation and some bought, and held nearly 1000 volumes when it closed in 1969. The children paid a small subscription and borrowed books on Sundays. There were usually between 20 and 30 borrowers. The most significant years of the library were those from 1859 until the First World War and this was when the collection was richest. In later years, as more libraries were opened in Adelaide, fewer books were added. The strength of the collection continued to be the older books. Twentieth century readers looked to the old collection for books referred to by more modern authors. Books entered the library after 1914 are indicated on the annotated catalogue.

Catherine Helen Spence, after whom the new wing of the State Library of South Australia was named in 2003, was a leading light in this activity, if not the instigator, and was librarian in the early days. She maintained an interest in the library and in children's literature all her life, publishing seventeen articles on children's books in newspapers in South Australia, Victoria, New South Wales and Queensland between 1879 and 1885.

Catalogues were brought out from time to time. Four catalogues, three printed and one typed, still exist. The 1869 catalogue lists 404 books, the 1877 catalogue 602 and the 1893 catalogue 841 (below). The 1976 catalogue, which was made after the library ceased activity, lists almost 1,000 books. Not all of those listed in the 1976 catalogue were with the collection when it was given to the State Library of South Australia, as some had been sold after the library closed. Many of these however have now been given by the buyers to the collection, including some which had found other homes before the 1976 catalogue was made. 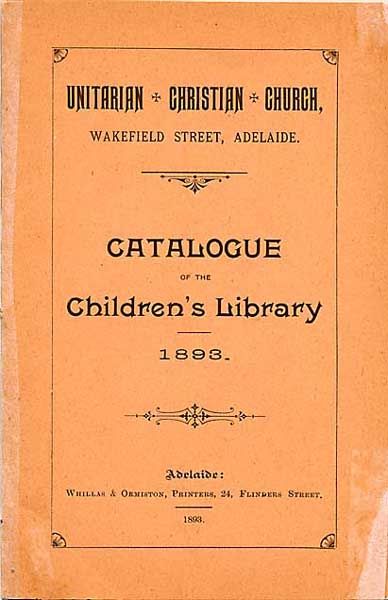 Front cover of the 1893 Sunday School library catalogue (SRG 122/38). Copies of this image may be used for private research/study. Any other use requires permission from the State Library of South Australia

The annotated catalogue is an amalgamation of the three early catalogues and the 1976 catalogue and includes some books which were not listed in any of these, but which were part of the collection when it was handed to the State Library. The information given allows a researcher to gain information about any particular title but also, because each entry lists the catalogues the book appears in, to plot the development of the library, noting how religious books and other unsatisfactory books were gradually removed from the collection, how perhaps some were lost or worn out, and how new books were continually added.

The three original catalogues list the books alphabetically by title, sometimes adding the author's name. Sometimes the titles are not exact and sometimes the books have been attributed to the wrong author. With books no longer with the collection some guesses have been necessary. Some years of research have made me confident that my suppositions are correct. The numbers allotted, apparently haphazardly, to books in the three early catalogues, 1869, 1877 and 1893, are different in each case. This renumbering must have involved those early women workers in immense labour, as new numbers were written in the books as well as in the catalogues. I can deduce no reason for their changing the numbers. Books which entered the library between 1869 and 1877, and 1877 and 1893, were assigned numbers which were written in the books and later crossed out when the new catalogues were made. I have noted such numbers as pre-1877, or pre-1893. Later in the twentieth century a new method of numbering was introduced and the first letter of the author's name was followed by a running number.

Within the annotated catalogue the books are listed alphabetically by author, and by title when it has not been possible to discover an author. When two or more books are by the same anonymous author they are listed together under the heading 'Author of'. The measurements giving some idea of the size of a book are external measurements, except those copied from the 1976 catalogue, which appear to be internal measurements. Some catalogue numbers are preceded by an asterisk. These are copied from the original catalogues which used the star to signify books suitable for small children.

Location, dates and authors of the books

Location of the books
Dr Wall's annotated catalogue indicates which books, though listed in one or more catalogues, are no longer with the UCCL collection. Where another copy has been sighted, the catalogue lists its publication details in order to give an idea of its size, number of pages and date of first publication. These copies were found elsewhere in the Children's Literature Research Collection in the State Library of South Australia.

Author details
Finding out something about the authors of the books proved in many cases to be extremely difficult. Many nineteenth writers, particularly women, used pseudonyms or initials. Even when their names are given it is frequently impossible to discover anything about them. Once again it is usually harder to find information about women, many of whom published few books.

Dates of first publication
Dr Wall has endeavoured to discover the date of first publication as this throws light on the activities of the librarians in Adelaide, in 1859 still a colony remote from the centres of book publication. But this is not always possible with books published so long ago. Early books have not always survived even in British deposit collections. Publication dates are sometimes unreliable as books published toward the end of one year frequently carry the next year's date. Therefore the earliest publication date discovered has been given.

Condition of the books
Many of the books which remain with the collection are battered with wear, having lost title and other pages, including those which gave catalogue numbers and the Unitarian Library inscription. But many are in splendid condition having been protected by the holland covers made by the library committee to help preserve them. These greyish covers, with the book numbers inked in black on the spine, were unsightly and to our eyes now off-putting. But they certainly helped to extend the life of the books. Over 150 of the books remaining with the collection were rebound in leather in the early days, sometimes with gold lettering on the spine, and of these many are in good condition, although others are falling to pieces. Inscriptions in some books suggest that books no longer wanted by the owners were often given to the library, and remained with the collection sometimes without being catalogued.

Other catalogues searched for information
Where Dr Wall was unable to see a copy of a book she searched library catalogues for some information. The source of such information follows the entry for the book. The chief source has been COPAC, an online Union Catalogue, which provides free access to the merged online catalogues of 24 of the largest university research libraries in the UK and Ireland, plus the British Library and the National Library of Scotland. The Library of Congress online catalogue was also consulted. Four other indispensable tools for research in this area are:

·   Allibone, S. Austin Critical dictionary of English literature and British and American authors in 3 volumes 1877 with a supplement in 2 volumes dated  1891 by John Foster Kirk

Wall, Dr Barbara, (2004) A Children's Library and a Children's Librarian in Bibliofile : quarterly publication of the Friends of the State Library of South Australia, August 2004, pp 25 - 30.

This is a list of articles on children's literature by Catherine Helen Spence. The numbers identify the source of the comments by Spence which appear in the annotated catalogue. Many of these articles can be found on The National Library of Australia's Trove digitised newspapers and more database.