World War One (WWI) is also known as The Great War or the First World War.

Some 20,000 Australian volunteers rushed to join up, all eager to do their part for King and Country. Some even returned to Britain to enlist, keen to support the Empire.

By November of 1914 the first wave of volunteers where prepared to set sail for Egypt. They became known as the  First Australian Imperial Force (AIF).   In April 1915 when the Australian and New Zealand troops landed at Gallipoli, on the Turkish coast, they took on the nickname "ANZACs" (Australian New Zealand Army Corp.) and soon after also earned the affectionate title 'diggers'.

By 1916 it became harder and harder to recruit volunteers to cover the AIF's massive losses and meet the demand for reinforcements. A referendum in October 1916 asked Australians:

The Australian people answered 'no' to this question and when asked a similar question in a second referendum in December 1917 'Are you in favour of the proposal of the Commonwealth Government for reinforcing the Commonwealth Forces overseas?' they again showed their disfavour and voted 'no'. This ended the issue of conscription for the remainder of the war.

Many consider Armistice Day (also known as Remembrance Day), the 11 November 1918, as the end of the war. However this date only marked the signing of the ceasefire and the end of fighting. There was to be another 5 months of political posturing and manoeuvring before the Treaty of Versailles was signed on the 28 June 1919 and thus ending hostilities between Germany and the Allies.

As Australia chose not to contribute troops to the occupying forces in Germany after the 11 November 1918 ceasefire; the military began the lengthy process of repatriating up to 167,000 troops back to Australia. Some soldiers chose to delay their departure and instead joined the British Army and went on to serve in Northern Russia during the Russian Civil War.

Also, in Egypt in early 1919, a number of Australian light horse units were used to quell a nationalist uprising while they were waiting for passage back to Australia.

Despite shortages in shipping, the process of returning the soldiers to Australia was completed faster than expected and by September 1919 there were only 10,000 men still in Britain awaiting repatriation. The last of the main transports conveying Australian troops left England on 23 December 1919, arriving in Australia in early 1920. A year later, on 1 April 1921, the AIF was officially disbanded. 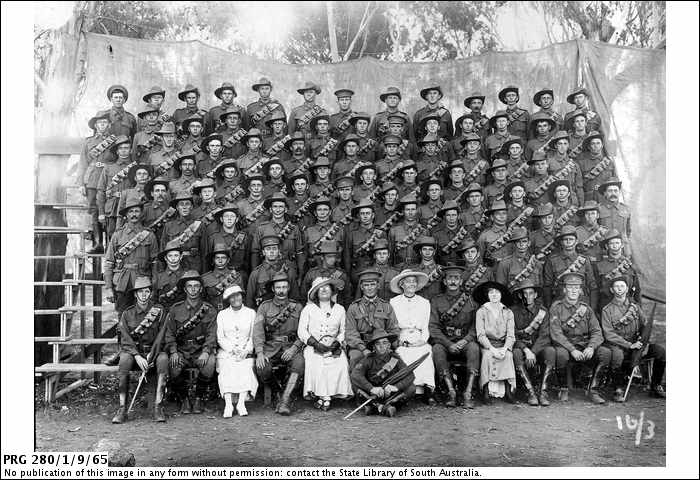 View more information about this image here.
You may order a high quality photographic copy.
No known Copyright restrictions - Conditions of use.