1836 - 1870:  Imperial Forces in SA responsible for the defence of the colony.  In practice this did not always occur.  Numbers were small, regiments changed frequently, their behaviour was sometimes questionable and there would be a period of years when troops where withdrawn because they where needed elsewhere.

1838:  In practice 20 policemen handled security matters in the colony

1846: Fear of attack from France or even America generated a public call for another volunteer force.  As the threat dwindled so did the pressure to create a volunteer force and it did not happen.

1854: The Militia Act. This Act gave the Governor power to raise a force of 2000 men if needed (volunteers first, then conscripts if needed), this Act was never used.

1854: Volunteer Militia Forces approved.  Units such as the Adelaide Rifles where raised, however they petered out after the Crimean War ended.

1863: All Imperial troops withdrawn to fight in the New Zealand Maori Wars for 3 years.

1866: A Scottish volunteer unit raised in the South East.

1900:  The HMCS Protector sent to China for the Boxer Rebellion.  Over 100 South Australians served.

1901: Defence became a federal responsibility and this lead to major restructuring of military forces. 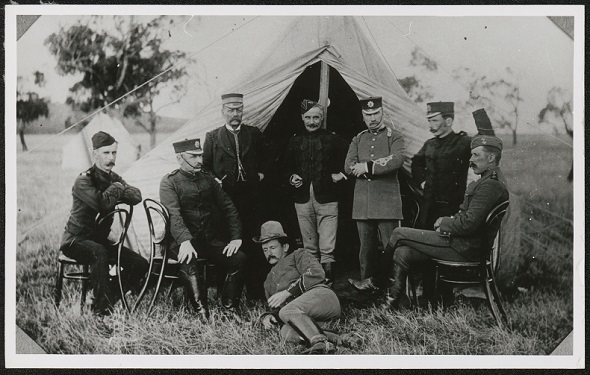 B19200/22
View more information about this image here.
You may order a high quality photographic copy.
No known copyright restrictions - Conditions of use.

Four companies of British Marines arrived with the First Fleet in 1788.  Approximately 26 regiments where garrisoned in Australia between 1788 and 1870 when the last of the British regiments withdrew.