Back in Australia Mawson began planning an expedition of his own - a scientific expedition and to operate from a different part of Antarctica. His plan was for a three base expedition covering an area from Cape Adare in the east to the Gaussberg in the west 2000 miles of coast. In addition to the planned scientific work, the commercial resources of the continent would be investigated ranging from guano deposits to whales to minerals. Fund raising was onerous.

The Australasian Antarctic Expedition sailed from Hobart on 2 December 1911, deeply in debt and with the ship Aurora, under Captain John King Davis, deeply overloaded.

A small base was established on Macquarie Island 850 miles south of Tasmania - this was part of Mawson's radio relay from the Antarctic to Australia, one of the innovations he introduced to Antarctic exploration. The leader here was George Ainsworth, meteorologist, with Leslie Blake as geologist and cartographer and Harold Hamilton biologist. Charles Sandell and Arthur Sawyer were the wireless operators and mechanics.

By early January 1912 Aurora was cruising west along the Antarctic ice front looking for a suitable landing place for the main base. Finally a site was chosen at what would be named Cape Denison in Commonwealth Bay. Landing of equipment began and continued for 10 days: they were yet to learn that they had landed at the windiest place on earth - the home of the blizzard. At Cape Denison a hut was built, and meteorological and magnetic observations were begun. Blizzard conditions prevented the men from doing much of the planned work. Even simple daily tasks of instrument reading became hazardous. In September the first wireless messages from Antarctica were transmitted and received at the Macquarie Island base. Return messages failed to be heard above the gales and static.

The team at Cape Denison was:

The Aurora continued west carrying the Western Base party, led by Frank Wild, an Antarctic veteran. The season was beginning to close in and finding a site for this base was looking impossible. They were further west than Mawson had intended, and finally on 15 February decided to land the party and its equipment on an ice shelf: Shackleton Ice Shelf. Captain Davis was concerned this was an act of desperation, but was persuaded by the experienced Wild. Davis asked Wild to write a letter to explain why he believed this was a safe option. The men built their hut 585 metres inland from the edge of the ice shelf: they were still 27 kilometres from the nearest land.

The western base party consisted of:

Mawson's plans for the summer sledging programme included a southern party which would attempt to reach the South Magnetic Pole, led by Eric Webb; the near eastern party to explore the adjacent coast under Frank Stillwell; the eastern coastal party led by Cecil Madigan; and the far eastern party led by Mawson himself with Xavier Mertz and Belgrave Ninnis and a western party using the 'air tractor' and led by Frank Bickerton..

The tragic events of the far eastern party overshadowed the results of the other parties. This is the party from which Mawson was the lone survivor. Briefly, 311 miles from the base on 14 December 1912, Ninnis and the sledge loaded with their tent, practically all of their food and the better of the two dog teams disappeared down a crevasse when the snow lid collapsed. For 4 hours they called and sounded the depths below: no response came. They calculated that by eating the dogs they could just manage to reach the base. No depots had been laid on the outward route, so they were free to choose their route.  They improvised eating utensils; the first and weakest of the dogs was killed and became food for the men and the other dogs. Provided they could maintain good daily distances (though they travelled at night when the surface was harder) they would make it. To be held up by a blizzard would be disastrous.

By the beginning of January 1913 Xavier Mertz was failing fast; he died on the 8th - Mawson was now alone, and still a hundred miles from the base and safety. He reduced his outfit as best he could, cutting his sledge in half with a saw attachment on his pocket knife. Strong winds that first day made it impossible to travel - he used the time to ready himself, by eating well, by preparing the dog meat.  As he travelled steadily on, the soles of his feet became detached. Stoically he salved them with lanolin and bound them with bandages. His skin was beginning to slough - he stripped and basked in the brilliant sunshine confident it would have some restorative effect.

Disaster struck again when he fell down a crevasse and twisted at the end of his sledge rope. He resisted the temptation to slip out of his harness then & there to plummet into the depths - slowly agonisingly with frost bitten hands he dragged himself up and out of the crevasse. His daily mileage increased despite being tent-bound twice.  His hair was falling out in chunks now, he had 2 pounds of food left, but a large rocky outcrop which was only 20 miles from the base was now in sight. The next day he found a bag of food and a note left by a search party, which had departed that same morning. It gave directions and distances to further food bags. Three days later he reached a cave dug into the ice above their base hut. Here he was blizzard-bound for a week. This was the beginning of a long period of recuperation. When he reached the base he learned the ship had left only a few hours before to collect the men from the Western Base. It was recalled, but was unable to put a boat ashore.  Mawson and the small party left behind to search for him would remain at Cape Denison for another year.

Over 6400 kilometres of country was mapped; major glaciers were named for Belgrave Ninnis and Xavier Mertz. A huge coastal formation Dreadnought Bluff, towering above the sea ice to 300 metres and complete with a series of organ pipes and a large talus slope was described by Madigan's party.  This party also discovered some lichens and mosses, and small red insects under rocks. Bickerton's western party discovered a chondrite meteorite Maps of the coastal surveys were produced. Stillwell the geologist produced a paper The metamorphic rocks of Adelie Land which was published as part of the Australasian Antarctic Expedition reports. This would earn him his DSc from the University of Melbourne in 1916. The geological work of the expedition showed how the Australian coastline and that of the Antarctic due south of Australia bore many similarities. John Hunter and Archibald McLean produced pioneering studies in biology and bacteriology. Eric Webb recorded magnetic fluctuations close to the South Magnetic Pole and his careful work brought praise from Professor Edgeworth David, who remarked that scientists would welcome his ‘splendid series of records’. Madigan's meticulous meteorological records and his subsequent research paper on the meteorology at Cape Denison remain an important foundation document in Antarctic weather research. The oceanographical surveys conducted from the ship Aurora were groundbreaking as was the work on Macquarie Island which was closely mapped for the first time.

The Antarctic historian J. Gordon Hayes wrote in 1928: “Sir Douglas Mawson's Expedition, judged by the magnitude both of its scale and of its achievements, was the greatest and most consummate expedition that ever sailed for Antarctica.” (Antarctica: a treatise on the southern continent p. 210)

The ship Aurora and Captain Davis

The Aurora, Mawson’s ship was a tough Dundee whaler and sealer, built in 1876 to withstand Arctic conditions.  She had been thoroughly tested in those waters and proved to be well adapted for ice-navigation, as well as an excellent sea-boat in heavy weather.  Her carrying capacity was 600 tons.  After Mawson and Davis purchased her for 6000 pounds, Davis supervised an overhaul in England, where a new foremast was fitted and the rigging altered to that of a barquentine.  Sounding machines were installed on deck.  The Aurora  sailed for Australia on 28 July 1911, heavily loaded with some 3000 cases of stores and 48 Greenland dogs, and carrying Xavier Mertz and Belgrave Ninnis as passengers. She carried .  She reached Hobart on 4 November and left, just short of four weeks later, at 4.00pm on December 2, 1911, to the ringing cheers of the crowd on the wharf, and followed down river by a flurry of small craft.

The Aurora, subsequent to Mawson’s expedition, was bought by Ernest Shackleton, for the Ross Sea component of his attempt to cross the Antarctic.  Following that expedition, she disappeared at sea, while on a passage across the south Pacific, and was finally posted as missing at Lloyd’s on 2 January 1918.  Davis rated Aurora a better sailer and ice ship than the Discovery, Scott’s ship in 1901 - 04, and later, Mawson’s ship for the BANZARE expedition, and which is now preserved as an historic vessel at Dundee.

John King Davis was born 1884 in England and at 16 was signed on as an apprentice seaman aboard the Celtic Chief. In 1906 he gained his first mate’s certificate in Australia, followed by his extra master’s certificate in New Zealand. He served on Ernest Shackleton’s 1907-09 British Antarctic Expedition as Chief Officer on the Nimrod. It was during this period that he met Douglas Mawson and formed a lasting friendship. Mawson later engaged him as captain for his Australasian Antarctic Expedition. Davis served throughout the expedition, including the voyage south in 1914 to collect Mawson and the small team of men who had remained behind with him during a second winter. King served during World War I on transports carrying men and horses to England and the Middle East and in repatriating men following the war. He was appointed Commonwealth Director of Navigation in 1920.

In October 1916 he again captained the Aurora and took her south to McMurdo Sound to rescue the men of Shackleton’s shore party for the Trans Antarctic Expedition. Davis sailed again to the Antarctic with Mawson as captain of the Discovery on the British Australian and New Zealand Antarctic Research expedition (BANZARE) of 1929-30.

Australia's second station in Antarctica was established in 1957, and named Davis in his honour. The Davis Sea, west of the Shackleton Ice Shelf, coasting Antarctica between 90° and 95°E, also commemorates him.

Douglas Mawson and five other men 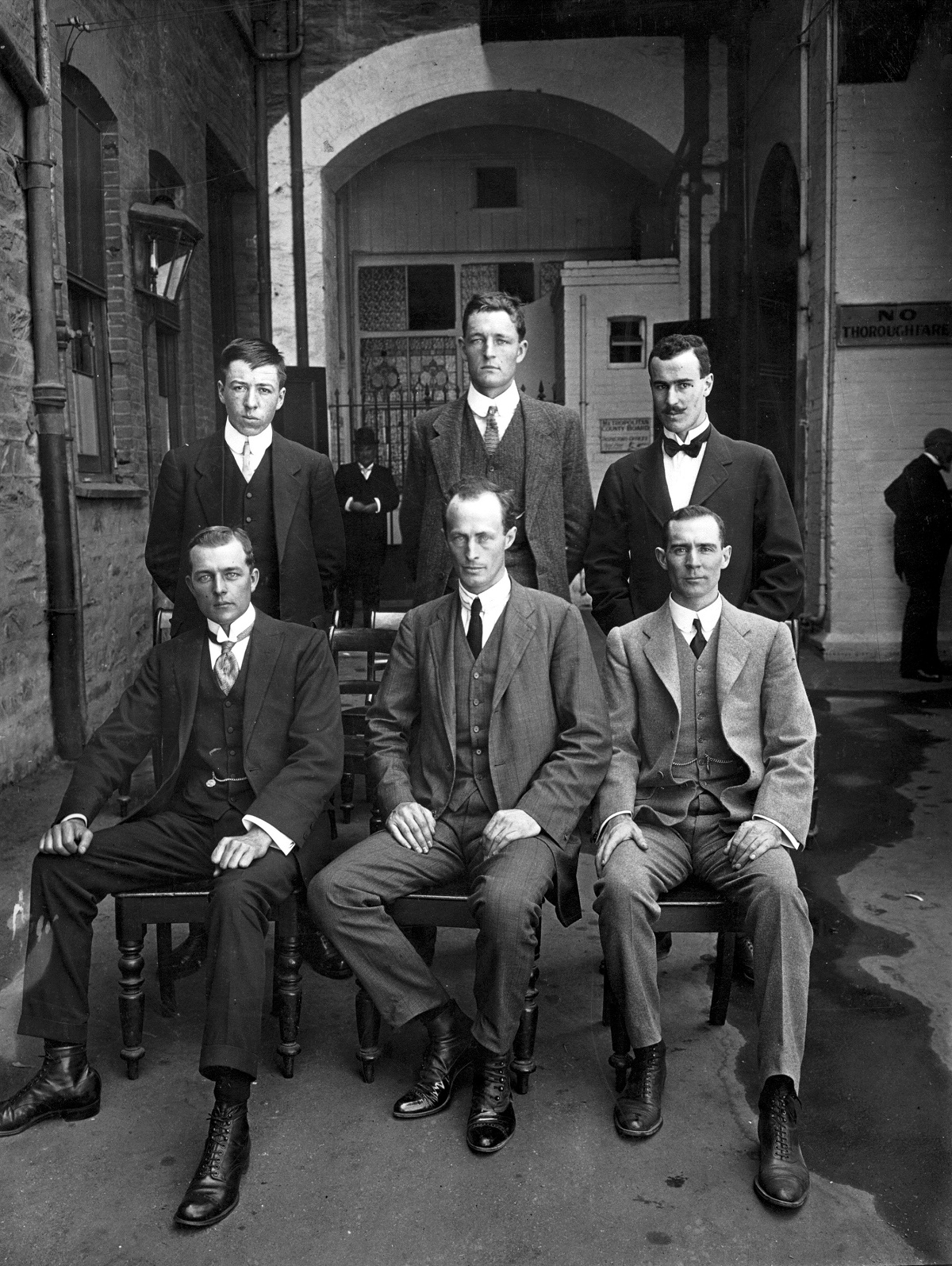 PRG 280/1/12/65
View more information about this image here.
You may order a high quality photographic copy.
No known copyright restrictions - Conditions of use.