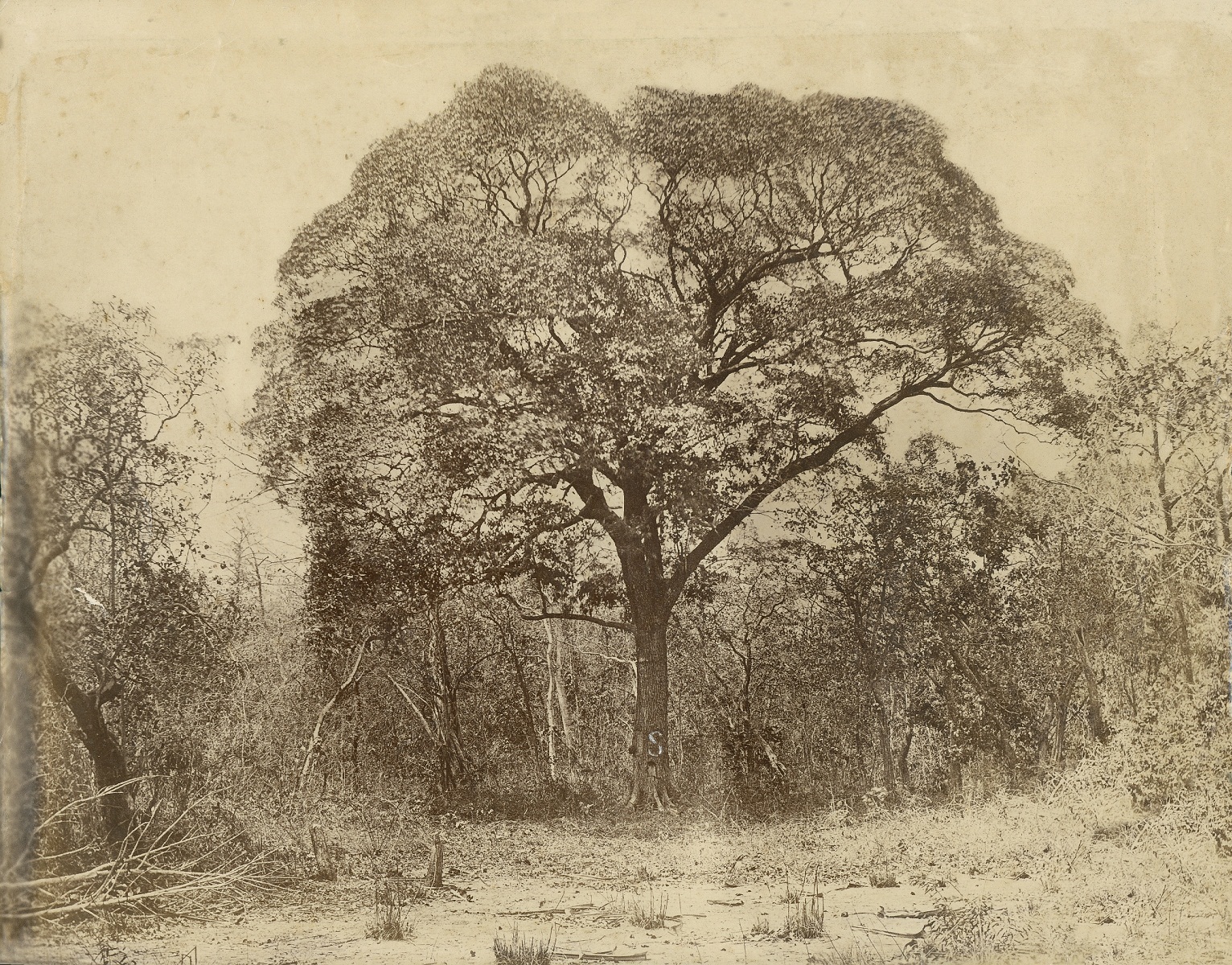 B 2269
View more information about this image here.
You may order a high quality photographic copy.
No known copyright restrictions - Conditions of use.

The South Australian government again provided 2000 pounds and almost immediately provisions were sent up to Chambers Creek.  Kekwick and Thring were again included in the team.  The other members of the party were: W Patrick Auld, James Frew, Stephen King, Heath Nash, John McGorrerey, Frederick Waterhouse as the government appointed naturalist, and John Billiatt. This time all the horses were supplied from the Chambers Brothers property at Cobdogla (on the River Murray) including 26 that had survived the fifth expedition. In all there were 71 horses.

They left Chambers Creek on 8 January 1862. Shortly after leaving the more settled districts the party began to experience difficulties with the Aboriginal people, who were doubtless already distressed about the loss of traditional lands to the pastoralists further south. Stuart's policy was self defence only and his 'no aggressive action' was rigorously enforced. Water was again a problem and some of the horses were failing already. On 11 March they reached the Centre of Australia, and a slight diversion from Stuart's previous route brought them to a fine water source which Stuart named for Thring.

For the next six weeks good progress was made along the previous route with known water sources. At Stuart's old camp at the northern end of Newcastle Waters he rested the horses for a week to prepare them for the next stage. In a number of scouting trips Stuart found a series of waterholes - the first, which he named for Frew was some 40 feet wide and three feet deep.  Howell's Ponds were found next, and the base camp moved forward.  From here Stuart set out again for the Victoria River, but was forced back by lack of water. He then tried to the north and found King's Ponds. Still determined to strike NW to the Victoria River he tried again, hoping that special water bags he carried would be the answer to the water problem. These failed him and he was forced back to the depot at Howell's Ponds. This was his last attempt in this direction. He established a new forward base at King's Ponds. Pushing forward he found the country improving to the north-east and then a small creek broadened into what appeared to be permanent water. This was later named Daly Waters and the depot was moved forward again.

Shortly after Stuart found a watercourse which he named the Strangways. The ground was becoming rockier and the hills more significant. He decided to move the whole party forward and to have all the horses shod for travelling over the harder ground. The party found some fish in the river which provided a welcome change of diet.

A number of rivers were now crossed and named for friends or members of his party - the Chambers, Waterhouse, Fanny and Katherine. Kekwick Springs and Billiatt Springs were discovered and named. Stuart thought he was following the Adelaide River - in fact he was further east on the Mary River. Even if he had determined his longitude regularly it would have been of little assistance as this part of northern Australia was only poorly charted (from coastal surveys and Gregory's expedition of 1856). After days of travelling through undulating well grassed plains, or over granite rises, the country deteriorated to swamp. Stuart went to the east and more easterly again trying to avoid the swamp. He was aware they were approaching the coast, but did not disclose this to any members of the party except Thring and Auld. Finally on 24 July 1862, Stuart rode forward through thick scrub and onto the beach. He dipped his feet in the Indian Ocean and washed his hands and face in it. Thring called out 'The sea the sea' and the rest of the party came forward.

Stuart had hoped to be able to travel along the beach to the mouth of the Adelaide River, a mere day's ride away. This however was impossible as there was no firm ground. In the end they backtracked some distance and travelled west-north-west for about two miles.  Here a tall tree was stripped of its branches and the flag raised. An airtight tin was buried at the foot of the tree - it contained a note declaring that the South Australia Great Northern Exploring Expedition had reached 'this spot on the 25th day of July 1862 having crossed the entire continent of Australia from the Southern to the Indian Ocean, passing through the Centre…'  They also carved a message on the tree 'Dig one foot -S'

Stuart's initials were carved on another tree, adjacent to where they had first reached the coast.

Stuart and his party set about the long return journey, often camping in the same places as on their outward route. The horses by now were in a bad way, and so too were Stuart and his men. The lack of fresh food in their diets was now leading to severe vitamin deficiencies. From the middle of October Stuart was in such pain, and unable to ride his horse, that a litter was constructed and slung between two horses. He was carried in this. Water was their main problem. Waterholes that had been full of water on the way north were now drying up. Their baggage was reduced, and horses that failed were killed for fresh meat.

South of the MacDonnell Ranges the country improved and some bush foods were found that alleviated Stuart's condition a little, but water was still scarce, or lacking altogether. By 23 November they had reached the first of the artesian springs and several days later encountered a stockman, and at Mount Margaret Station were welcomed with 'every kindness and attention that was in their power.' Stuart telegraphed the news of his triumph from Kooringa (Burra) and reached Adelaide on 17 December 1862. The rest of the party followed more slowly for the sake of the horses. Stuart's long time friend and supporter James Chambers had died earlier that year, but his brother, John Chambers welcomed Stuart, and Adelaide arranged a celebratory procession for 21 January.

Journal of the Royal Geographical Society of London volume 33 1863 pages 276-321: Diary of Mr. John McDouall Stuart (Gold medallist FRGS). Explorations from Adelaide across the continent of Australia 1861-62. This article publishes Stuart's diary from 21 January to 25 July 1862: the return journey is summarised. Read at the Society meeting 9 March 1863.

South Australian Register  Monday 26 September 1863. Page 3 Summary of expedition. Pages 5-6 Appendix: Stuart's diary. This publication of Stuart's diary coincided with the official demonstration or procession of Stuart and his men through the streets of Adelaide.

South Australian Parliamentary Papers 125, 1863 Features and productions of country on Stuart's track across Australia. Report by F.G. Waterhouse on the fauna and flora, natural history and physical features of Australia, on the line of J.McD. Stuart's route...

Stuart, John McDouall Northern sheet of the plan of discoveries by John McDouall Stuart showing his route across the centre of the continent of Australia [cartographic material] : with alterations and additions to December 1862 / compiled from Stuarts plan and journal, in the office of the Surveyor General [Adelaide : Government Printer, 1863] Map showing Stuart's routes of 1861 and 1862 from Newcastle Waters to Point Stuart, near Darwin, N.T., also A.C. Gregory's track on the Victoria River and Leichhardt's track. Includes streams, waterholes, camps, relief by hachures and notes on vegetation and topography. Map extends from south of Newcastle Waters to Van Diemens Gulf.  Parliamentary Paper (South Australia. Parliament) ; 1863, no. 21