This guide to sources relating to children's experiences of the First World War was created by Library staff in 2014.  It comprises selected material held by the State Library or available online.

To find further material relevant to this topic, try searching with these subject headings in the State Library Catalogue:

For more assistance, talk with staff at the Library's Information Desk, or Ask Us.

While the home front during the Second World War is well documented and part of the collective narrative, less attention has been paid to the home front during the First World War.  Australian children were, undoubtedly, less affected by the War than those in countries where fighting occurred.  But Australia’s participation still impacted on many aspects of children’s lives, making the years 1914-1918 busy and often distressing.  School and family routines were disrupted.  Restrictions were imposed on some foodstuffs and services.  The absence of fathers, brothers and other relatives serving overseas had a profound effect on family life.  As with the wives of mothers and soldiers, children endured the long anxious wait for news of the fate of family members.

During both world wars children were encouraged to contribute to war efforts.  Propaganda campaigns enlisted school children’s support of patriotic organisations.  Short histories of the South Australian Children’s Patriotic Fund, Patriotic work in our schools and Six years with the SPF, describe fundraising efforts – salvage and recycling programs, and the knitting of ‘trench comforts’ (socks and other woollen garments for soldiers serving in Europe) – undertaken by the children of South Australia.

Many children of German descent faced the additional burden of anti-German sentiment.  Misdirected patriotic fervour saw some of the state’s considerable ‘German’ population subjected to accusations of disloyalty, while many ‘German’ towns and schools were eventually renamed.   After intense debate in the press and Parliament, Lutheran primary schools were forced to shut, creating an additional dislocation for many children. 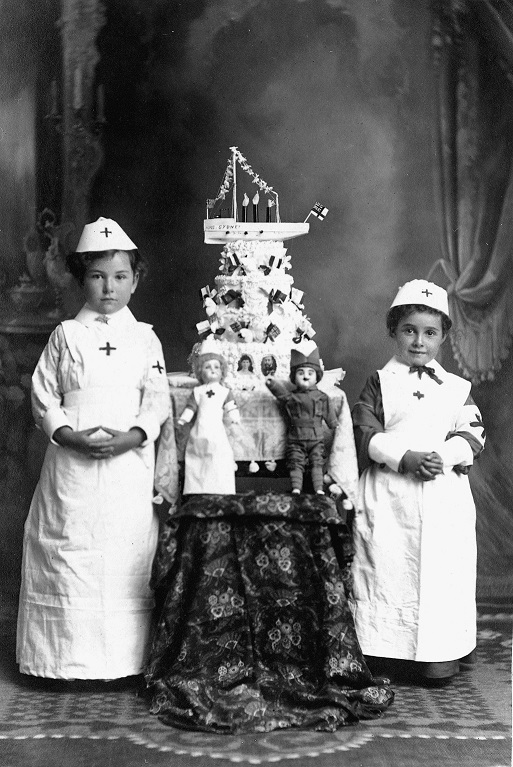 PRG 280/1/39/35 - Children dressed as Red Cross nurses, ca. 1915
View more information about this image here. You may order a high quality photographic copy. No known Copyright restrictions - Conditions of use.

Oral history is the recording of memories of peoples' unique life experiences. The State Library of South Australia's JD Somerville Oral History Collection is the central repository for unpublished oral history tapes and transcripts in South Australia.  In 1979, interviews were conducted with 39 women as part of the research for an Honours Degree thesis entitled 'South Australian women - some responses to the First World War' (Department of History, University of Adelaide). The interviews focus on the women's experiences during the years 1914 to 1919.

OH 31/6 – Interview with Alison M. Ashby/ Interviewer: Beth M. Robertson
Alison, the youngest child of the Quaker Ashby family of Wittunga farm, Blackwood, was a schoolgirl at the outbreak of the First World War.  She speaks of being preoccupied at this time not with world events, but with illness in her own home.  She remembers her older brother’s involvement with a discussion group of young men uncertain of their reaction to the war and recalls an occurrence which led to the curious belief that German people were hoarding gold in the scrub at Cherry Gardens.

OH 31/25 – Interview with Helen Fairley/ Interviewer: Beth M. Robertson
Helen Fairley was thirteen years and living with her grandmother at Coromandel Valley at the outbreak of the First World War.  She left school the following year.  She recalls her brother and uncles leaving for the war and her own contributions to the war effort, but her memories are mainly concerned with work on her grandmother’s farm.

OH 31/26 – Interview with Gladys Anderson/ Interviewer: Beth M. Robertson
Gladys Zellah Anderson… nee Sinigear, was a thirteen year old schoolgirl and living in Blackwood at the outbreak of the First World War.  Her only brother was killed in the war in 1916 and her invalid father died heartbroken a few months later, leaving Gladys responsible for her ailing mother.  She remembers the war as a time of bitterness and hardship, but also recalls the enjoyment of war work with other young people in the area.  Gladys hoped for a musical career but gained secretarial skills instead to support her mother… She speaks of some of her feelings about the war, including resentment of a local Quaker family because of their pacifist convictions.

OH 31/32 – Interview with Mrs Addington/ Interviewer: Beth M. Robertson
Mrs Addington was thirteen years old and living with her parents at the outbreak of the First World War.  Her memories are dominated by her nineteen year old brother’s death 1916 and the loss of several other relatives in the armed forces.