Children's literature leading up to and during the First World War was both imperialistic and patriotic, and a reflection of Australia's view of itself as a new nation.  Children were perceived as a group to be unified and persuaded of the merits of war, and this was reflected in the literature written for them.  Socialisation through writing was represented in fiction and classroom resources: school papers and texts included articles about battles, troop movements, commemorations of fallen soldiers, patriotic poetry and requests to support the War through various patriotic initiatives; novels encouraged children to answer the Empire's call, and to understand Australia's role in the War and the sacrifices made by its people.

Fitchett, W.H. The new world of the south: Australia in the making, 1913

Children's hour - first published by the South Australian Education Department in1890 to encourage reading, war-related information dominated its pages from 1914-1918.  Along with patriotic poetry, facts about campaigns and calls to involvement in the war effort, the magazine featured photographs of children costumed in war-themed outfits. 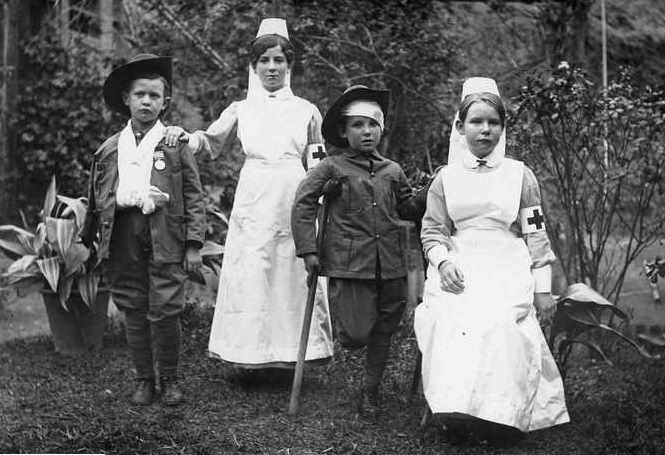 PRG 280/1/27/183 - Two boys dressed as soldiers and two girls as nurses.
View more information about this image here. You may order a high quality photographic copy. No known Copyright restrictions - Conditions of use.

An example of war-related educational information included is:
"The Dardanelles" in Children's hour: classes IV & V, vol. XXVII, no. 306, June 1915 - article informing children about the history and geography of the Dardanelles.

Chums - another English publication, a competitor of Boy's own.

In response to the intense patriotism engendered by the First World War, a number of board games and toys were produced for children.  These were often colourful, with strong imagery, and sometimes employed popular caricatures of 'the enemy'.

Bound for Berlin, the Great War game, n.d.
The race is on to see which of the Allies could get to Berlin first.  Along the way, and starting from different points in Europe, the game passes through various places that would have been current in the newspaper accounts of the war, though much less familiar today.  On the front cover, four soldiers chase a German soldier; the Union Jack is on the back cover.
CLRC Games box 43 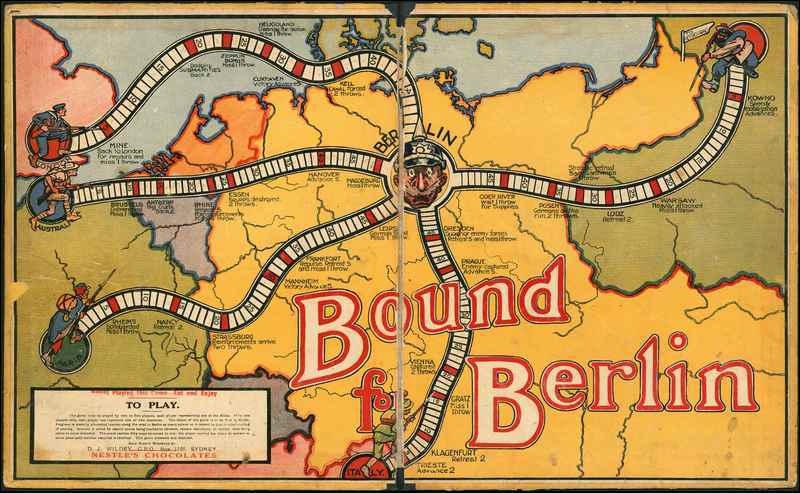 Dreadnoughts; or Australia's naval defence, ca.1914
No information about the game.  Board is marked out in 15 rows of up to 14 squares of ocean surrounding a map of Australia and New Guinea.  Seems to be for two players, who each have 6 dreadnoughts and 4 cruisers.
CLRC Games box 52

Dug outs & trenches, ca. 1915
Board game, played with 18 men moving 14 points.  Presents the player with a graphic view of the vicissitudes of trench warfare in the comfort of the home.  SLSA does not hold a copy of of the rules for this game, but it would appear to involve succeeding in placing a certain number of men in a trench to win it and the game.
CLRC Games box 17

Navy bobs, n.d.
Illustration on the lid is of two warships, a flash and three people playing the game.  The playing board has inserts [mast holes] on each side for 24 wooden pegs, and 14 holes down the centre.
CLRC Games box 52

Trencho, the new war game, n.d.
Cover illustration shows a soldier in a trench aiming his rifle up the hill.  "Rules for Trencho" are printed in the centre of the game; soldiers in yellow trenches fire towards the centre, and there are trees and explosions on a green battlefield.
CLRC Games box 30

The Children's Literature Research Collection (CLRC) was established in 1959 as a research and reference library for the study of children's literature of the world, with a particular emphasis on Australia, the United Kingdom and the United States of America.  To support this research function there is a collection of reference books and periodicals relating to the study of children's literature and child play.  A number of games and toys enhance the collection.

Contemporaneous material encouraging children's engagement with the war is listed under on the "Literature & games" page. Below is a sample of fiction and non-fiction in the CLRC pertaining to WW1, written after 1914-18. 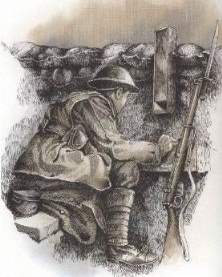 Illustration by Brian Harrison-Lever, from In Flanders Fields

Greenwood, Mark. Simpson and his donkey, 2008

Investigating Gallipoli: a resources for primary schools, 2010 - produced by the Department of Veterans Affairs

Story of Anzac, 1960 - 30 pages of cartoons, part of the Pictorial social studies series