6o Georgii V, No. 1223. An act to consolidate and amend the Law relating to Public Education - Acts of the Parliament of South Australia.  Adelaide, 1915.

July 13, 1915 - Teachers' Conference members "strongly resented the fact that the English language was not taught in certain Lutheran schools in this State and on this account that they should be closed altogether."

July 16, 1918 - Change of names of schools: from German Flat to Benara Flat; from Gnadenfrei to Marananga; from Hermann's Landing to Moramora.

SA Hansard, 1915, Assembly, 804 (Treasurer) - suggestion to limit the teaching of German to one half hour per day out of the five hours of school.

Ibid (Verran) - queries whether, when at war with Germany, Germans should be allowed to operate private schools.

SA Hansard, 1916, Assembly, 1786 (Vaughan) - reading of Education Act Amending Bill, calling for abolition of of German language in schools, and closure only if 'prohibited language' continues to be taught.

SA Hansard, 1916, Assembly, 1882 (Verran) - Amendment to the Education Act Amending Bill, to close Lutheran schools and put them under the state system, debated.

SA Hansard, 1916, Council, 1970 - Amendment, that schools to be closed only if the Minister felt they were disloyal, suggested.  Returned to Assembly and rejected.

SA Hansard, 1916, Council, 2013 - Conference of Assembly and Council representatives called, and Council withdraws Amendment.  Amending Bill with attached Schedule of 49 Lutheran schools to be closed between July and December 1917 ready to become law.

The closing of Lutheran primary schools was the culmination of sustained agitation, not just a sample of war precaution or war hysteria in South Australia.  Attacks on ‘German’ schools and attempts to legislate against them began long before the final successful strike.  As early as 1912, Lutheran schools featured in Parliamentary debates because of their resistance to proposed registration and inspection by government authorities.  By 1915, debate was coalescing into calls for a specific kind of control of the ‘German’ schools, and by 1916, restriction had been superseded by the finality of closure.

MP and former Premier John Verran was the most public representative of the anti-German feeling that led to the closures, and by 1916 had significant community support.  The nationalistic All-British League presented a petition signed by 49,000 South Australians to the Chief Secretary that called for, among other things, the closure of the ‘German’ schools. Newspaper articles and letters reflected the growing community sentiment, while organisations such as the Teachers’ Conference also voiced concern about ‘German’ schools.  The Lutheran schools were not without supporters, with examples drawn from the clergy, peace activists, and politicians - most notably E. H. Coombe. But their fate was sealed by the significant ‘No’ response to the 1916 conscription referendum, the responsibility for which was, rightly or wrongly, perceived to rest with the state’s large ‘German’ population.

All 49 Lutheran primary schools, (excluding Koonibba Mission), were closed in 1917, while the two secondary schools were permitted to remain open.  In some cases, the South Australian government leased back the buildings and took over the education of the children, with new teachers.  In others, such as Hahndorf Lutheran School, the children were moved into the local public school.  In either case, the sudden change would have been traumatic for the children, trying to comprehend the loss of German language teaching and Lutheran instruction, familiar teachers, and often the amenities of their former schools. 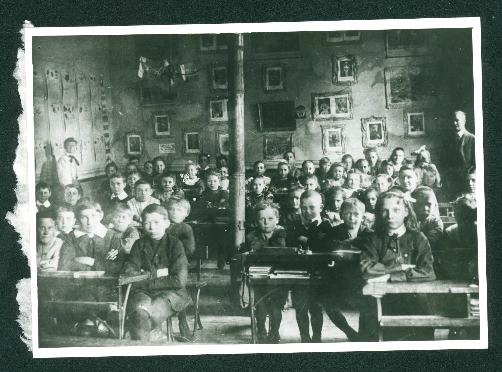 B 31371 - Interior of Martin Luther School, Flinders Street, 1910
View more information about this image here. You may order a high quality photographic copy. No known Copyright restrictions - Conditions of use.

OH 31/12 - Interview with Ida Kearney/ Interviewer: Beth M. Robertson
Ida Kearney, nee Dorsch, was eleven years old and living in Prospect with her parents at the outbreak of the First World War.  She speaks of her siblings' careers, including army and nursing service, and then of her childhood during the war.  She recalls several incidents of ill-feeling towards her and the family because of their German name.

Volk, Valerie. The closing of the Lutheran primary schools in South Australia during the First World War, 2006

Newspapers covered the debate around Lutheran schools extensively. The following is a sample of reporting.

“Closing Lutheran schools” Kapunda Herald, Friday 22 June, 1917, p2 – notice has been given to the proprietor or headmaster of the German schools in the state that the Minister of Education will take over the school as from 1 July next.

“German schools” The Register, Friday 21 May, 1915, p7 - From ‘Be British’: “All Australians will be pleased to see that at last the authorities have ordered all German clubs to be closed, and it is an opportune time for our legislators to get busy, and bring about the closing of all German schools – not for the period of the war, as some of your correspondents suggest, but to do away with them altogether….”

“German schools” Daily Herald, 13 September 1916, p4 -
“The Government will introduce a Bill to provide that teaching in all primary schools shall be in the English language.”…

“German schools” The Register, 13 September 1916, p.6 – Bill to provide that all teaching in primary schools to be in English announced in Parliament.