While boys aged 14-17 could enlist in a non-fighting capacity during WW1 (generally as musicians), the actual enlistment age was 18, or 21 with parental/guardian consent.  While it is not possible to determine exact numbers, many boys falsified their ages in order to enlist and fight as soldiers. 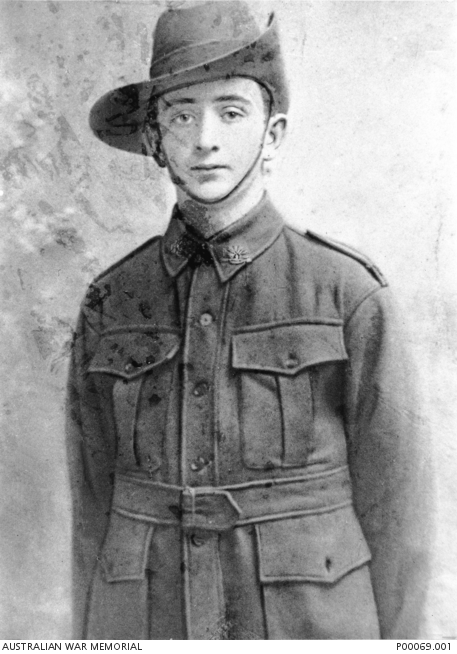 Field Marshal Viscount Kitchener of Great Britain was invited by Prime Minister Deakin in 1909 to visit Australia and advise on the best way to provide Australia with a land defence.  Kitchener’s report echoed the bill, introduced to Parliament in 1909 and supported by the Opposition Labor Party at its 1908 conference, to introduce compulsory military training in peace time (referred to as universal training).  On 1 January 1911, the Commonwealth Defence Act 1911 (Cth) was passed as law and all males aged 12 to 26 were required to receive military training.  Men were divided according to age, with junior cadets comprising boys 12-14 years of age, senior cadets comprising boys 14-18, and young men aged 18-26 assigned to the home militia defence.

The support of schools was vital to the success of the scheme, since the system of cadet training began in the primary schools, with physical training prescribed by military authorities.  Junior cadet training was entirely in the hands of school teachers, who had first been trained by military officers.   This early training was less military in nature than focused on physical drill and sport.  It also acted to inculcate boys with the notions of loyalty to country and empire.  At this age, uniforms were not worn, although there were schools with pre-existing uniformed cadet units, who continued to do so. 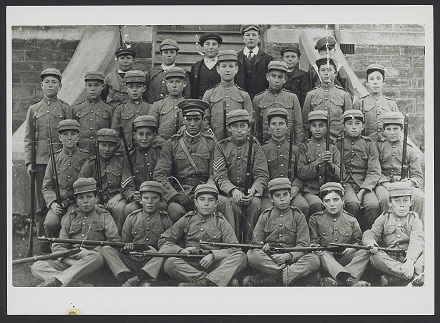 B 27713 - Primary School Cadet Corps, Burra, 1915
View more information about this image here. You may order a high quality photographic copy. No known Copyright restrictions - Conditions of use.

Senior Cadets were organised by Training Areas, administered by Area Officers.  If a school had at least 60 senior cadets, they could form their own units.  Unlike their junior counterparts, Senior Cadets were issued uniforms, a rifle, and learned the foundations necessary for service in any arm of the defence forces.

Boys and men could be exempted from compulsory training if they lived more than five miles from the nearest training site, or were passed medically unfit. Those who failed to register for training were punished with fines or jail sentences, and the severity of this punishment generated some of the strongest opposition to the scheme.  While institutions such as the political parties and most churches generally supported universal training, some in the broader labour movement were less enthusiastic, as evidenced in the Daily Herald newspaper’s editorials and letters.

The most significant organised opposition was led by the Australian Freedom League, a group founded by the South Australian Quakers in co-operation with some other Christian groups.  After their 1912 formation, the Freedom League hosted often 'spirited' public meetings, and their propaganda provoked lengthy and vigorous debate.  But arguments against compulsion on matters of principle or other abstractions were not universally supported by the adult population. Letters written to condemn “child conscription” were matched by others praising the virtues of parade grounds, Empire, military camps and drills.  Aside from the harshness of penalties for not registering – from 1911 to 1915, there were 34,000 prosecutions of people who refused -  the main drivers for opposition appear to have been concern over the inconvenience and dangers of night drills, the long hours of drill inflicted on boys already tired after work, and the disruption of male employees taking time off work.

Universal military training persisted after the conclusion of World War 1, with the Junior Cadet scheme the first to go, in 1922.  Senior cadets and service with the militia was suspended in November 1929.

Contemporary newspapers covered the issues around compulsory military training extensively. The following list is a sample of reporting.

"Compulsory military training.  To the editor." The Advertiser, Wednesday 1 February 1911, p.12 - support for.

Stockings, Craig. The torch and the sword: a history of the army cadet movement in Australia, 2007