Table games for children, together with books for their enjoyment, emerged towards the middle of the eighteenth century. Teaching geography, history, science and even religion, through play, became a fashionable method of education and was urged upon parents by John Locke, a highly respected and well-known educational theorist of the day. Children's books and games were to become an integral part of the nursery and were to reflect the interests and aspirations of the middle class, as well as its optimism, enthusiastic spirit of inquiry, and adventurous nature.

During the 1740s books especially to please children made their appearance and in 1759 one of the earliest table games, A Journey through Europe, was published for children by Carrington Bowles. Amongst the first to recognise the commercial potential of children's books and games was John Newbery, who combined the toy and book trade with his sale of a ball or a pincushion along with his first book, A Little Pretty Pocket-Book in 1744. Newbery's flourishing business was continued after his death by his successors until it was sold in 1801 to John Harris, another 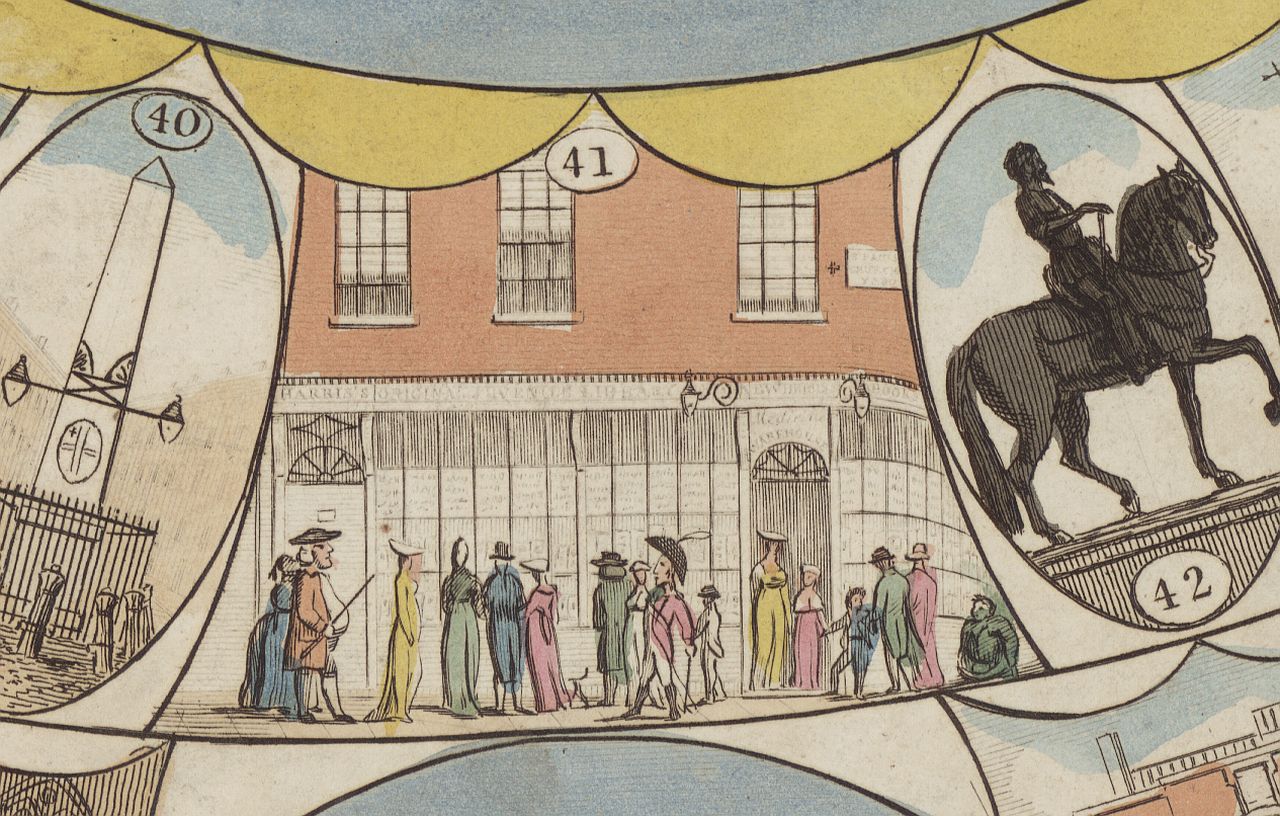 innovative bookseller and publisher. One of the illustrated sites of London in Harris's attractive table game for children, The Panorama of London (left), or A Day's Journey round the Metropolis, An Amusing and Instructive Game published in 1809, is a visit to Harris's shop at the Corner of St. Paul's Church-Yard; "where you may stop one turn, and receive a Counter from each Player, to purchase a New Game, or an instructive Book, as your fancy may direct".

The Panorama of London (detail, panel 41). Copies of this image may be used for private research/study. You may order a high quality photographic copy. Any other use requires permission from the State Library of South Australia.

Typical of the table games of the period is Wallis's Tour Through England and Wales, A New Geographical Pastime published in London on 24th December, 1794. Early games were backed on canvas and folded into a slip case with a plain or illustrated label. They were printed from engraved or copper plates and coloured by hand and towards 1840 lithography was introduced. Wallis's Tour has the rules printed at the side of the game which is played with an eight-sided teetotum. The rules optimistically suggest that "if a double set of counters and pyramids are purchased, six may play". On the tour around the 117 towns and cities marked on the map of England and Wales the traveller occasionally has to wait a turn or so to visit the sites. The forfeits are placed at random and do not appear to have any particular moral purpose. Chichester, for example, "produces fine lobsters and manufactures needles" and Dorchester is "famous for its strong beer and its superb county gaol lately built". Neither of these towns requires the traveller to lose a turn to view the sites, whereas at Worcester, he must stay two turns to see the several "manufactories" of china and gloves. At Marlborough the traveller stays one turn "to dine at one of the finest Inns in the kingdom", and at the Isle of Man he is shipwrecked and is out of the game.

Games at this time were in the shape of a coiled track consisting of round vignettes illustrating, for example, history and mythology as well as contemporary events. This formal design often terminated in a dominant centre piece portraying an English monarch or London, the centre of English society. The history of the world was sometimes outlined from Adam and Eve to the contemporary king or queen of England. 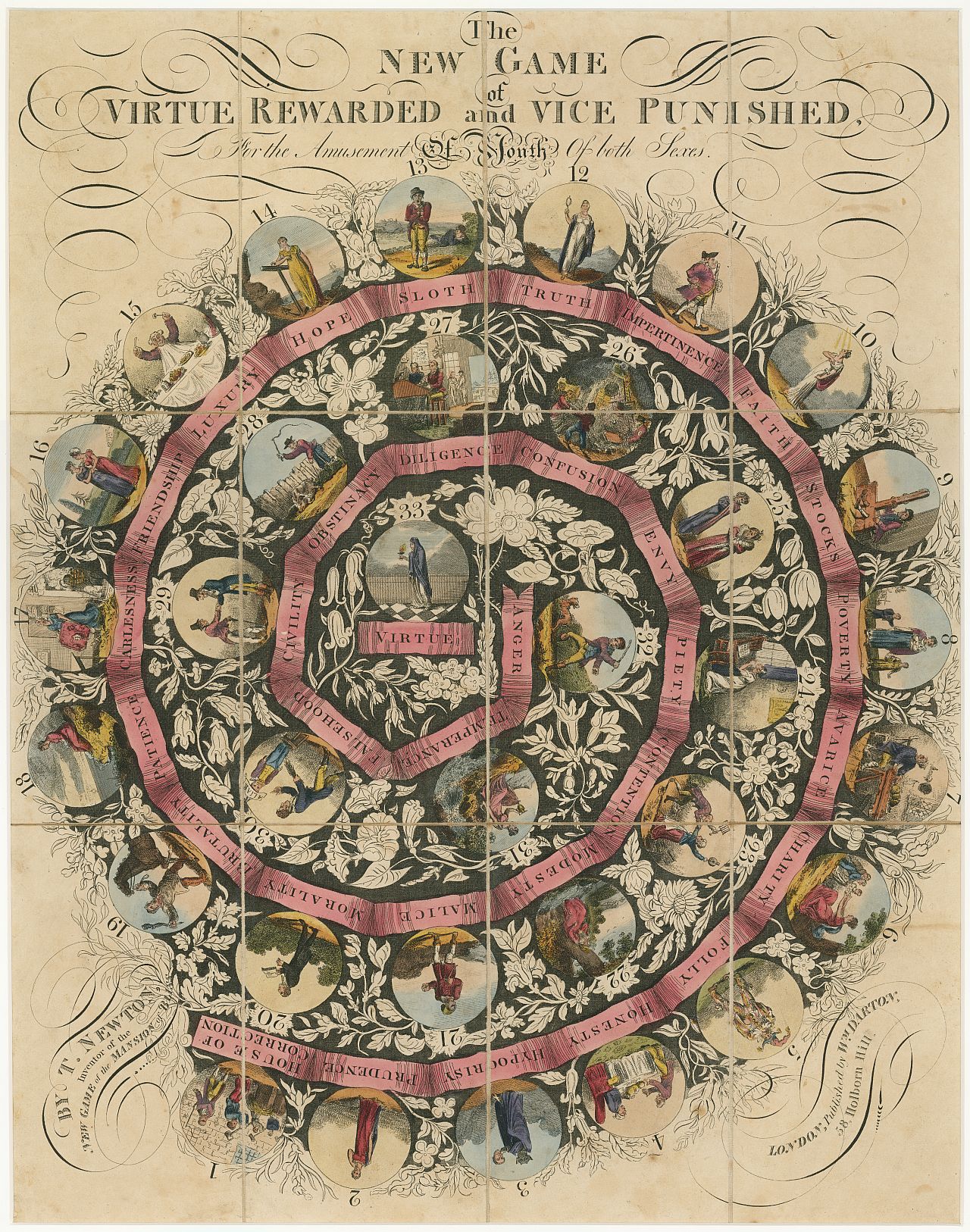 In addition to race games which taught geography and history there were a great number that gave advice on morality, as for example, The New Game of Virtue Rewarded and Vice Punished (below), For the Amusement of Youth of both Sexes by T. N. Newton and published by William Darton in 1818. In the latter rewards are given to Prudence, Honesty, and Temperance, but Obstinacy and Confusion are definitely not forgiven. The two most dangerous vices of all are seen as Sloth and Brutality for these require the player to be sent to the House of Correction, or back to the beginning of the game, where he must wait while every other player has three turns. Virtue, the winner of the moral stakes, claims the contents of the bank and wins the game. Thus are joined morality and financial reward, a union calculated to justify social position and prosperity for the middle class.

The New Game of Virtue Rewarded and Vice Punished. Copies of this image may be used for private research/study. You may order a high quality photographic copy. Any other use requires permission from the State Library of South Australia.

By 1770 the children's book trade in England had made healthy progress and the production of children's games a tentative beginning. A distinctive aspect of this new literature and game trade for children was an interest in Captain Cook. Table games of journeys around the world or through the British Empire often consisted of maps, sometimes with scenes inserted, while the accompanying rule book gave descriptions of the places visited and of the manners and customs of the people. In early table games the main reference to Australia related to Captain Cook in the South Seas and to his death in 'Owhyhee'. Also of interest were the descriptions of convict settlement in Botany Bay and an occasional mention of Australia's flora and fauna. English games during this period represented the might of the British Empire and the place of the colonies in commerce and trade as well as the social scheme of things. Children's books discussed similar topics but had an emphasis on the desirability of immigration and the hope "that all the world will become one England". 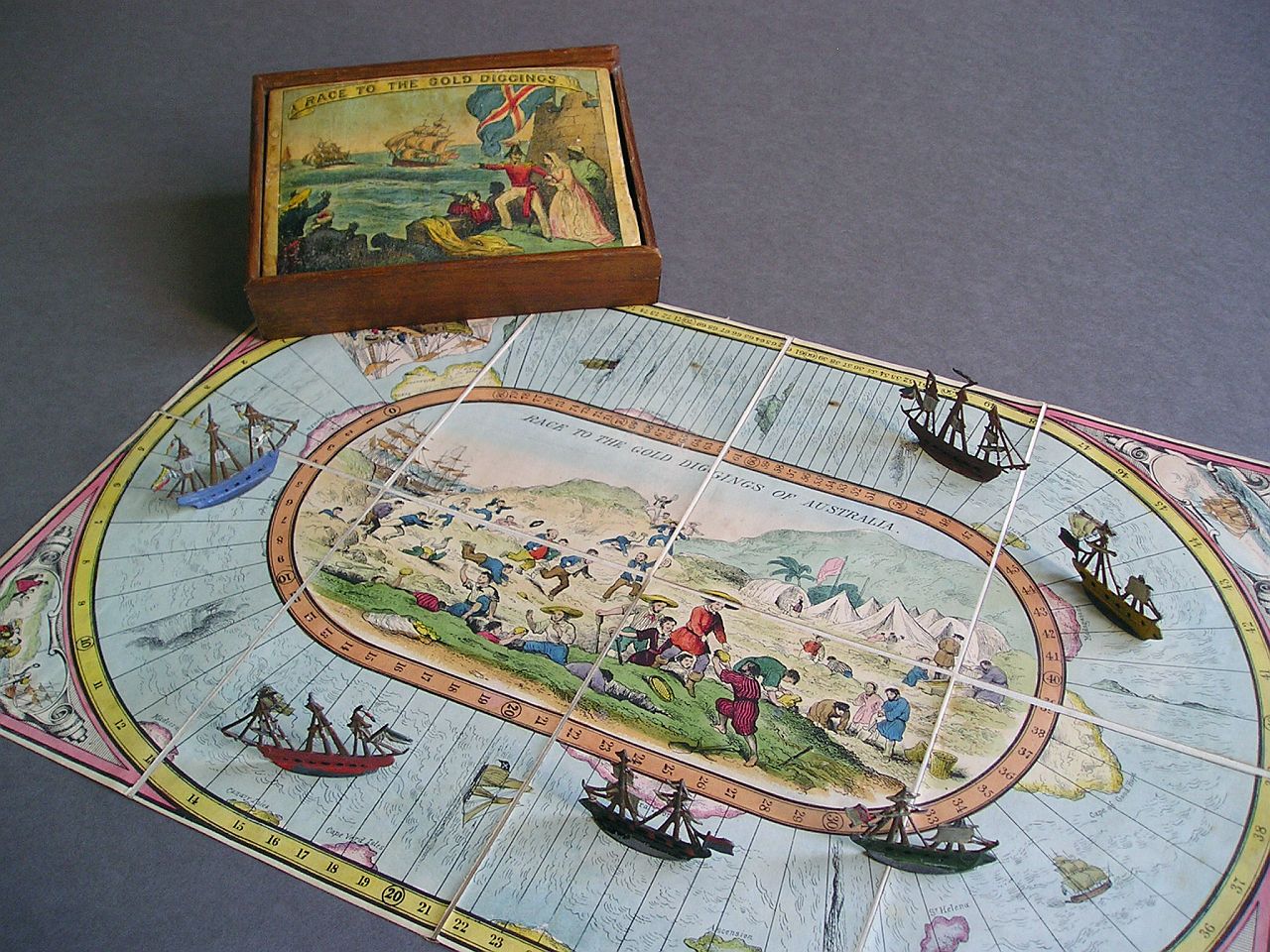 Later in the 1850s Australia was shown as a country where hard work and diligence would be rewarded when the wool bales are transported back "home" to England. In contrast is Race to the Gold Diggings of Australia (left), a race game from Plymouth to Port Philip, where the traveller finds huge nuggets of gold all there for the taking. No wonder this game is rare and valuable for without any virtue at all it must have had limited appeal to the adult buying public of the time.

Race to the Gold Diggings of Australia, showing game board, box and ships. Copies of this image may be used for private research/study. You may order a high quality photographic copy. Any other use requires permission from the State Library of South Australia.

Australian writing for children commenced in earnest during the 1890s, though from its beginning in 1841, there had been many interesting local examples. Table games produced in Australia in the 19th century are rare and their beginning belongs more to the 20th century. Australian children before the 1890s had very little access to information about their own country through play or through fiction and even text books were slow to include Australian history and geography. Australian children who were sufficiently fortunate to own books and games were mainly given overseas publications, with the majority coming from England.