Hero tales originated in the oral tradition and now exist in written accounts which have come down to us principally via the cheap ballad sheets and chapbooks which perpetuated the exploits of legendary characters such as Robin Hood. Another type of hero, who was equally appealing, can be found in the literary works originally intended for adults but quickly adopted by children and later, adapted for them. John Bunyan's The Pilgrim's Progress, 1678, Daniel Defoe's Robinson Crusoe, 1719 and Jonathan Swift's Gulliver's Travels, 1720, appeared in a vast number of editions including the chapbook.

King Arthur, and other heroes were medieval creations whose adventures reflected the chivalric code and ritual of their era along with its evils and conflicts. Their tournaments, quests, enchantments and battles, though often presented symbolically, are enough in themselves to entertain the child reader. Similarly, the demons, giants and monsters encountered by Christian on his pilgrimage captivated generations of children long after Puritanism was a dominating influence in society. Robinson Crusoe may have embodied Protestant ideals, but his shipwreck, like Gulliver's, led to irresistible adventure. So too, did his life on a desert island. Moments such as Robinson's finding the footprint in the sand and Gulliver's awakening to discover he is bound hand and foot in the land of Lilliput, belong to the experiences of childhood.

It was not until well into the nineteenth century, however, that heroes and adventure really came into their own. Robinson Crusoe led to a host of imitations, 'Robinsonades', throughout the eighteenth and nineteenth centuries. In this kind of story, a distant island, totally removed from the world of everyday, was the place where adventure happened, with shipwreck providing the cause of the 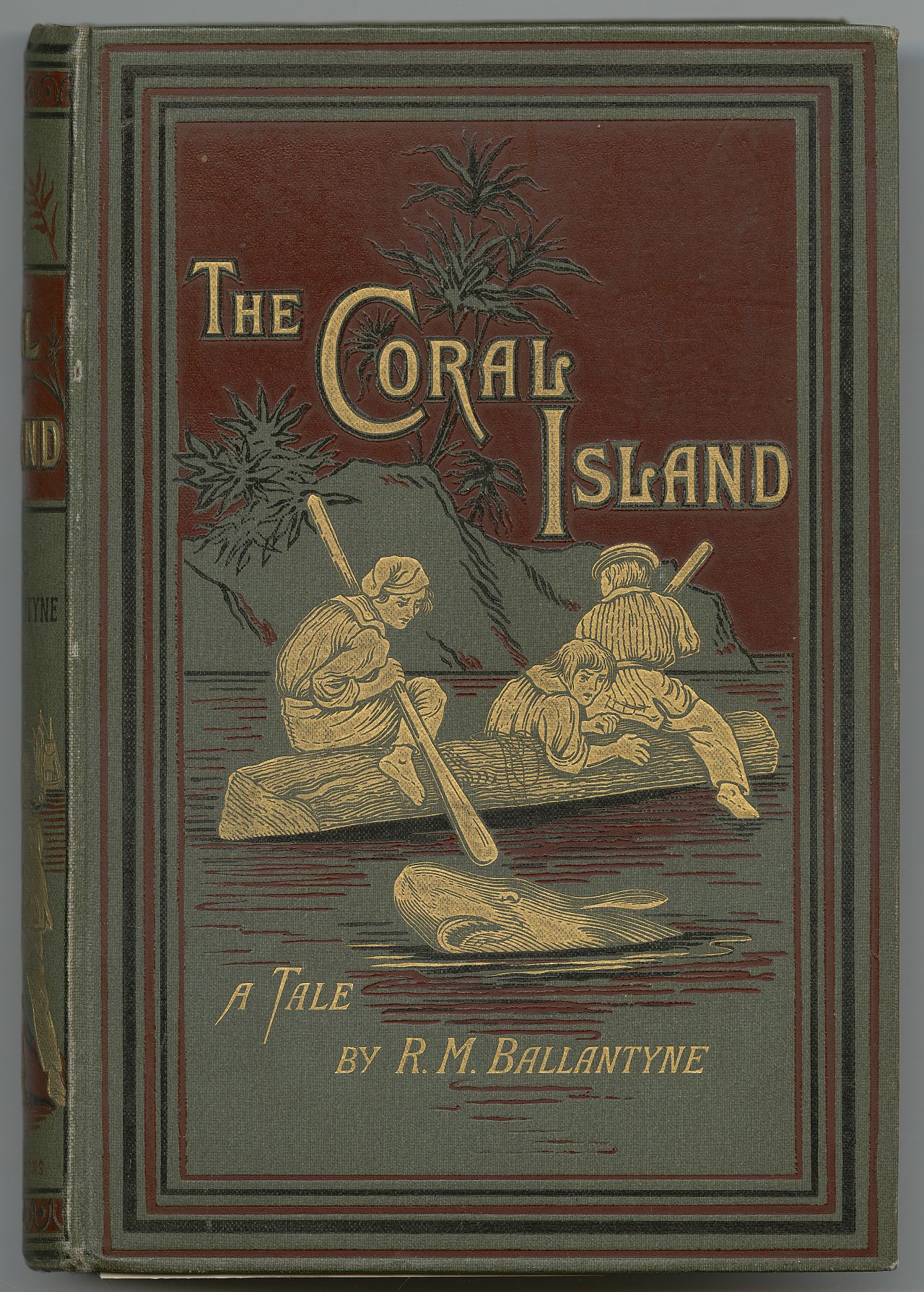 The Coral Island, R. M. Ballantyne (1884). Copies of this image may be used for private research/study. You may order a high quality photographic copy. Any other use requires permission from the State Library of South Australia.

The adventure story also evolved from biography and the moral tale, which were accounts of real or imaginary boys who usually made a success of life. It also included elements of the explorers' and travellers' tales with their detailed information about geography and natural history. These informational and moral approaches were very much part of the early adventure story, but gradually the encyclopaedic data gave way to the hero's search for excitement and adventure; the moral remained. With authors such as R. M. Ballantyne and G. A. Henty the Victorian hero became the character of vigour and action much loved by his followers who were wealthy enough to buy the lavishly bound editions in which he made his early appearances.

The boy hero of the adventure story was only rivalled by the intrepid schoolboy characters that followed in the wake of Tom Brown's School Days (Thomas Hughes), 1857. Through these stories the 'manly' hero was given his code of ethics and mode of behaviour which upheld the values of the great English Public Schools. This young hero was often involved in upright causes and could be moved to violence in their name. After the end of the Crimean War in 1856 he was frequently roused by the concept of British superiority and the glory of the Empire.

Stevenson, Henty and Jules Verne were writers who flourished in the pages of The Boy's Own Paper, 1879-1965, a weekly magazine sold for one penny and devoted to wholesome fiction and informative articles on sport and hobbies. One of many such magazines, the B.O.P., as it was affectionately known, was intended to supply excitement together with Victorian morality. Great British battles and victories were re-fought in countless serials. Pirates and cannibals were opposed with bravery and quick wit. The emphasis on fair play and the code of muscular morality exemplified in sports such as cricket 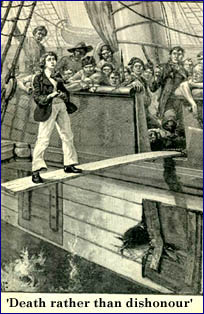 and rugger played an integral part in the school stories. Beneath this brave exterior, the B.O.P. rather poignantly reveals, through its 'Answers to Correspondents', that many of its readers did not feel that they matched up to the ideal.

"Death rather than dishonour", the heroic lad refuses to serve with the pirates who captured his ship. From the story Conqueror Compass or, The Days of John Company by Franklin Fox, drawn by Alfred Pearce from The Boy's own annual, Saturday 29th December, p 199.

But what of the villains? In early times they were often anonymous Black, Red or Green Knights, defiant rebels against the civilising influence of the new Arthurian kingdom. Robin Hood battled against those symbols of unjust authority, King John and the Sheriff of Nottingham. Christian's most notable adversary was Apollyon, a foul fiend with scales, dragon wings and fiery breath: a symbol of sin.

The villains were also foreigners and renegades. The Saracens in Arthurian legend were heathens, representing a threat to Christendom from outside. Similarly, as the nineteenth century progressed, Africans, Australian Aboriginal people, Chinese and other perceived threats to the establishment of the Empire became villains. The renegade British villain was portrayed as a cowardly cad; an example is Hunston, Jack Harkaway's bête noire, who was the school bully when first opposed by Jack.

In the unsophisticated adventure story, action is all-important. Characterisation, whether of hero or villain, is minimal. Each is a stereotype. Robert Louis Stevenson, however, was amongst those who did endow his heroes and villains with depth of character. No reader of Treasure Island can ever forget the sly, plausible, black-hearted Long John Silver-although the novel is full of wonderfully realised personalities.

While most Victorian heroes were irreproachably just and true, some of them were almost indistinguishable from the villains. The 'Penny Dreadfuls' or 'Bloods' dealt with several ambivalent heroes. Dick Turpin the highwayman, mounted on Black Bess, performed noble deeds yet made his living robbing 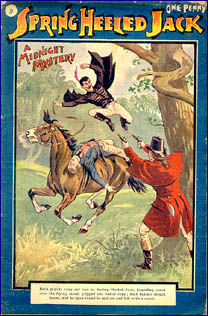 honest folk. Dick was, of course, under the evil influence of the dreaded Sapathwa, the Blue Dwarf. Spring-heeled Jack, a satanic-looking precursor of Batman had, despite his essential goodness, some very shady associates in London's East End. (Please note that many of the State Library's 'Penny Dreadfuls' are yet to be catalogued so please contact the Library if you wish to see them).


Spring Heeled Jack: A Midnight Mystery, ca. 1904. Copies of this image may be used for private research/study. Any other use requires permission from the State Library of South Australia.


These dashing characters dominated the leisure reading of the boys and men 'from nine to ninety' of many social classes. In general, hero and villain were the inseparable sides of the same coin. What would any hero have achieved without his complementary black-hearted double-dyed villain?