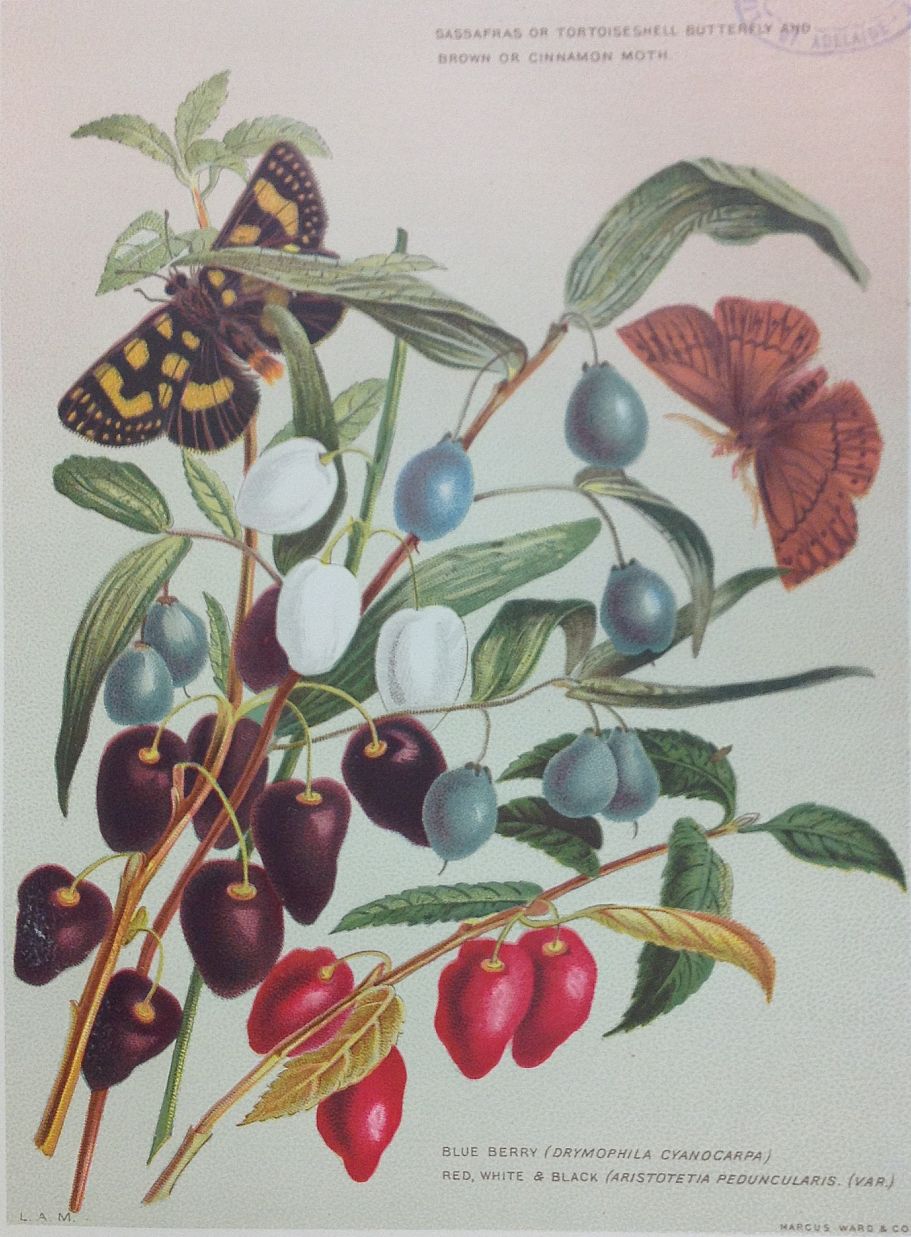 A Mother’s Offering to her children was published in 1841 and is believed to be the first children’s book published in Australia. It covers a variety of topics from geology and natural history to shipwrecks and the customs of Australian Aboriginal people.  Similar in style is Louisa Anne Meredith’s Tasmanian Friends and Foes... (below right) published in 1880.  It was written and illustrated in Tasmania  but published in England and is one of the few nineteenth century Australian children’s books to have coloured illustrations.

A richly coloured book plate opposite page 40 from Tasmanian Friends and Foes, L.A. Meredith (1880). Copies of this image may be used for private research/study. Any other use requires permission from the State Library of South Australia.

Local Australian publishing, unlike its English counterpart, was not particularly dominated by the adventure story. It included books of history, geography, natural science, fables, Aboriginal legends, poetry and fantasy. Many of these books were for young children including Who Killed Cockatoo? by W.A. Cawthorne published in 1862 (below). This is said to be the first picture book published in Australia. 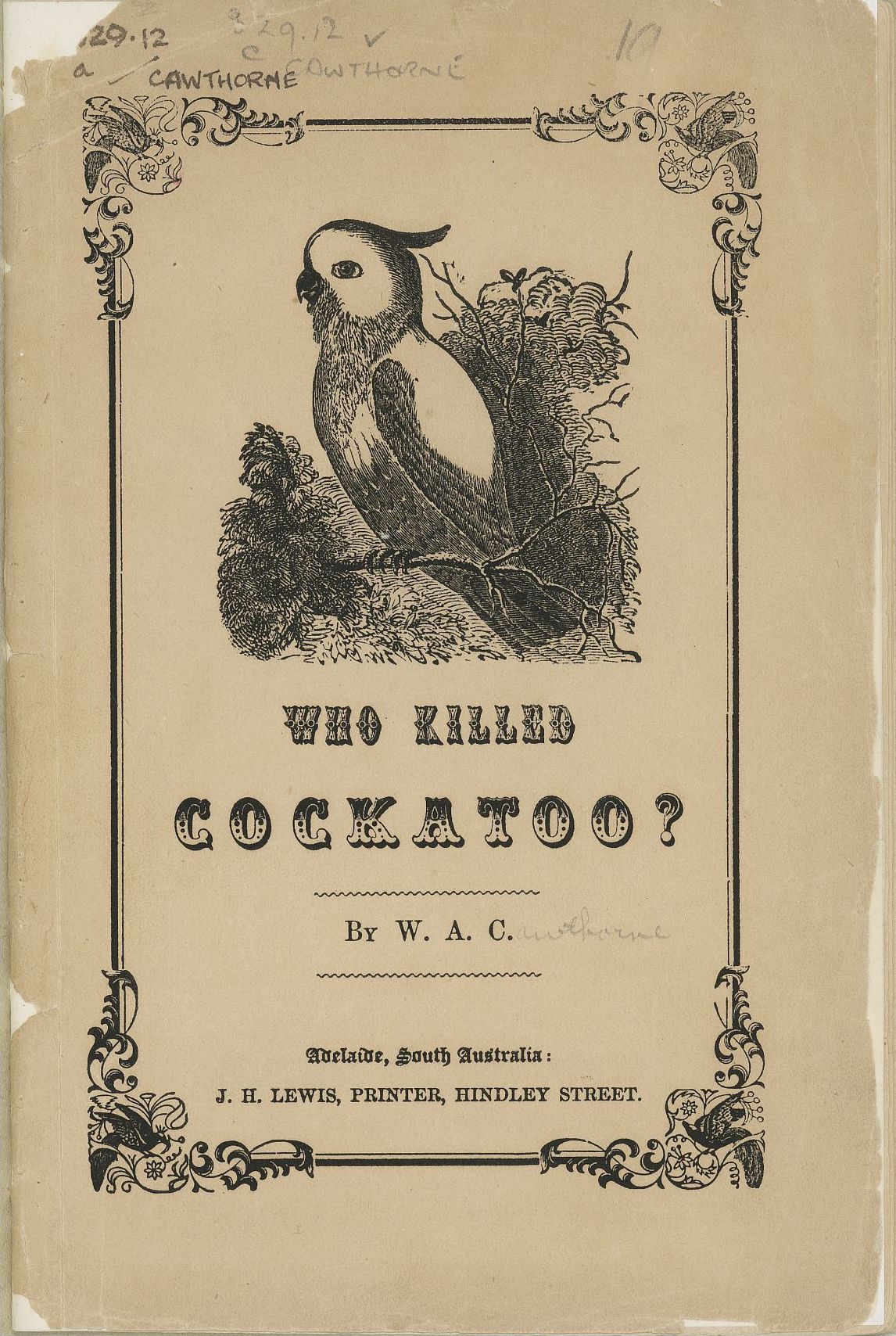 Title page from Who killed Cockatoo? (1862). Copies of this image may be used for private research/study. You may order a high quality photographic copy. Any other use requires permission from the State Library of South Australia.

Several notable Australian women authors during the 1890s introduced family stories. These reflected of the growing urbanisation of Australian society as well as being an expression of the authors’ interest in family life. They also followed overseas trends in writing.

In a few of the boys’ adventure stories the family had symbolised warmth and security, contrasting sharply with the dangers of the bush, but overall it was a minor focus of interest. With Ethel Turner, however, every member of the family was part of her story and parental disapproval represented far more terror than the bush. Her Seven Little Australians published in 1894, was translated into many languages. Ethel Turner and another woman author, Mary Grant Bruce, whose books were published between 1910 and 1942, dominated the Australian scene for the first half of the 20th century.

Mrs Bruce’s Billabong series, starting with A Little Bush Maid, about life on a station in the Outback, highlighted and idealised the qualities of mateship and family solidarity, two symbols with which Australians have faced the changing times since early colonial days.

Towards the end of the 1950s, a new group of women authors, including Nan Chauncy, Patricia Wrightson and Eleanor Spence, portrayed family relationships within their adventure stories, which were set mainly in the bush. On the whole during this period, there were very few contemporary family stories set in the city and depicting the life which most children live in Australia.

Along with the family story and adventure, fantasy also became fashionable during the 1890s. The early fantasy resulted fro 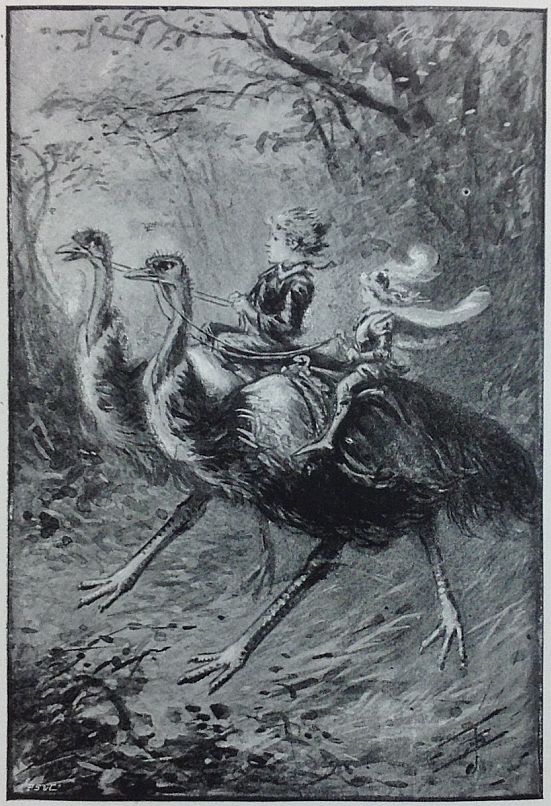 m the desire to people the Australian bush with magical creatures. "Australia! Hast thou no enchanted castles within thy vast domain?" was the question asked by Atha Westbury in Australian Fairy Tales in 1897 (Chapter 1, The Lone Rock).

Book plate from page 93 of Australian Fairy Tales (1897). Caption reads 'Speeding away across the country as swift as the wind'. Biffin and Sir Guy Fawkes Popgun speed away from school on emus in the story King Dunce. Copies of this image may be used for private research/study. Any other use requires permission from the State Library of South Australia.

This echoed the regret that many late nineteenth century authors felt about the lack of fairy folk in Australia. In the story Home Sweet Home by Arthur Ferres (in His cousin the wallaby, and three other Australian stories, 1896), Daisy Dimple exclaims - "How delightful it must be for those English and German children to live in Fairyland, and to see and speak with the king and queen, and take tea with the fairies themselves!" (page 109).  She achieves her desire to see Titania and Puck when she falls asleep and meets them among the rocks and caves of Port Jackson (below). 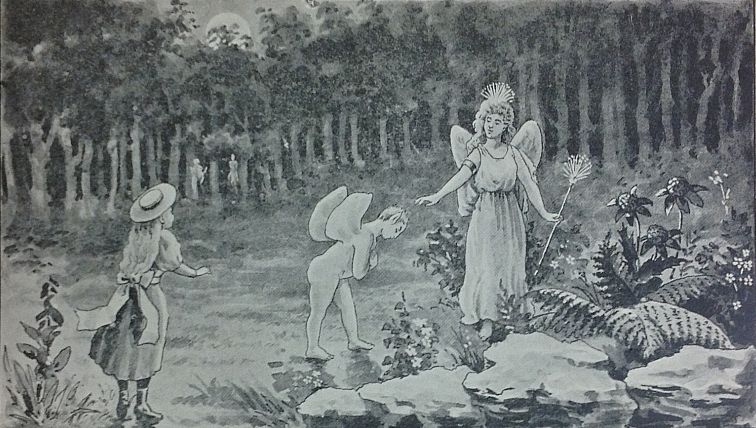 Book plate from the story Home Sweet Home (page 108). Copies of this image may be used for private research/study. Any other use requires permission from the State Library of South Australia.

Many of these books expressed a concern for nature and the needless killing of wild animals, the most enduring of these being Dot and the Kangaroo by Ethel Pedley published in 1899.

Early in the twentieth century the sisters, Ida Rentoul Outhwaite and Annie Rentoul created a magic land where fairies and elves lived in gum trees and tiptoed through paddocks by moonlight. May Gibbs and her Snugglepot and Cuddlepie, 1918, continued this tradition with her gumnut babies, but at the same time she expressed her love of nature and her plea for its preservation.

In Norman Lindsay’s The Magic Pudding, 1918, the characters are masterpieces of invention and the humour is inimitable. This book is not as well known overseas as one would expect, perhaps because its humour relies so much on the Australian idiom.

Early European colonists had collected and published examples of Aboriginal folklore for non-Aboriginal children to read. While now considered historically useful, such literature contained fanciful or paternalistic overtones and inaccuracies about Aboriginal culture. During the second half of the twentieth century Australian authors turned again to adventure and realism however Australian Aboriginal people who featured so prominently in the stories of the nineteenth century were absent from most of the fiction published during the first half of this century.

Over time non-Aboriginal authors began to write with more sensitivity and recognition of the custodians of traditional stories. Patricia Wrightson, inspired by Aboriginal legends, created a series of fantasies in which myth and reality meet. Commencing with The Nargun and the Stars in 1973, she gave her own interpretation of the mythical creatures inhabiting the rocks and rivers since the beginning of time. This feeling that the land has a presence and life of its own is an integral part of her early adventure stories, such as The Rocks of Honey, 1960, in which the main character says, "I think that the old land itself stirred and breathed and remembered a little."

It was not until the early 1970s that Aboriginal people began publishing children’s books from their own perspective, drawing on their unique traditions, beliefs and experiences. One of the first examples of this is the creation story The Rainbow Serpent (below right) by Dick Roughsey (Goobalathaldin). Today these authors and illustrators are often encouraged and supported by Indigenous publishing houses, such as Magabala Books. 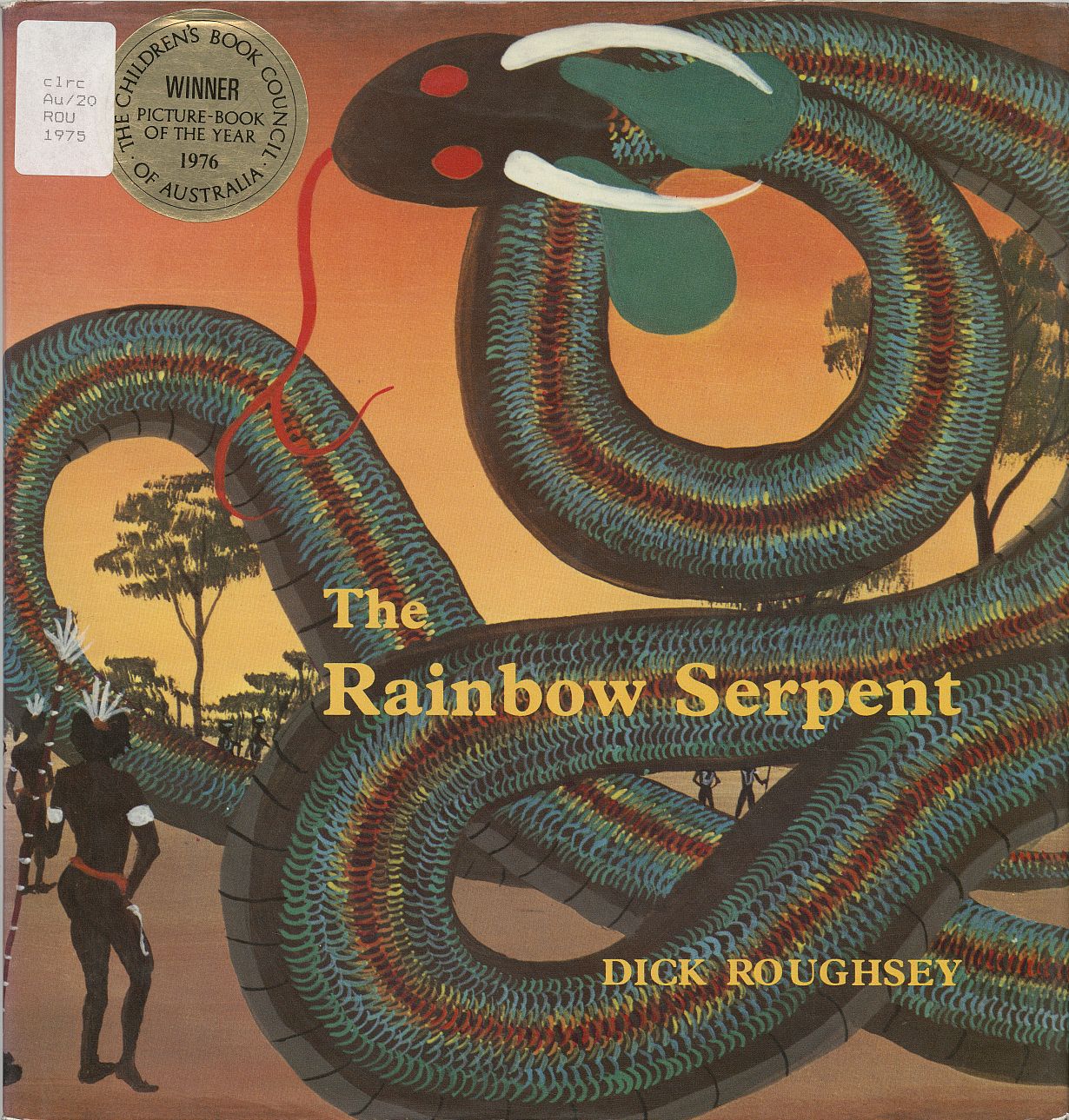 Front cover of The Rainbow Serpent. Copies of this image may be used for private research/study. You may order a high quality photographic copy. Any other use requires permission from the State Library of South Australia and Harper Collins Books.

Another genre to develop were the collaborations with Aboriginal story-tellers and illustrators, for example anthropologist Catherine Berndt's work with urban-contemporary Aboriginal artist Arone Meeks for Pheasant and kingfisher (1987), based on stories of the Tiwi Islands.  More recently Australian Children's Laureate and Aboriginal story-teller Boori Monty Pryor worked with photographer and children's author Meme McDonald to create several award-winnings books including Maybe Tomorrow (autobiography), My Girragundji and Njunjul the Sun.

Over the past twenty five years contemporary Aboriginal writers have presented stories and tales of the Dreamtime and contemporary experiences. Daisy Utemorrah, for example, in Do not go Around the Edges (1990), tells the story of her life on a mission station in Western Australia and at the same time presents many aspects of Aboriginal culture in poetry. Pat Torres’s outstanding illustrations combine to make this a striking blend of fact, imagination and spirit. Dr Lowitja O'Donoghue tells a poignant tale of her experience of removal from family and culture, her journey to her homeland and participation in Australian political and administrative life in Lowitja, 2003. Black in focus: a guide to Aboriginality in literature for young people, remains a seminal guide on this subject (Dunkle, 1994).

The twentieth century-stories about the bush or the Outback displayed an understanding of bush life and a desire for people and nature to live in harmony. Many authors have expressed the same respect for wild life and native bush land which was present in the fantasies of the previous century. Colin Thiele’s Storm Boy, 1963, is one of the most moving pleas. His vivid descriptions of the South Australian Coorong and its wild life are skilfully interwoven with his story of a lonely boy and his friend, Mr Percival the pelican, who is killed by duck shooters.

The destructive effects which people can have on the countryside have been dramatically shown by Ivan Southall in Ash Road, 1965, and Colin Thiele in February Dragon, 1965, both about bushfires. In these twentieth century stories the humans rather than the bush are the aggressors. Ash Road shows the effect of a thoughtless action on the lives of people as well as on the land itself.

The Crusoe-like existence which was frequently portrayed in the nineteenth century was revived by Ivan Southall in Hills End, 1962, and Lilith Norman in Climb a Lonely Hill in 1970. In their books they stated their faith in the ability of children to cope by themselves in extreme circumstances without help from adults. In both cases their island is the Australian Outback. 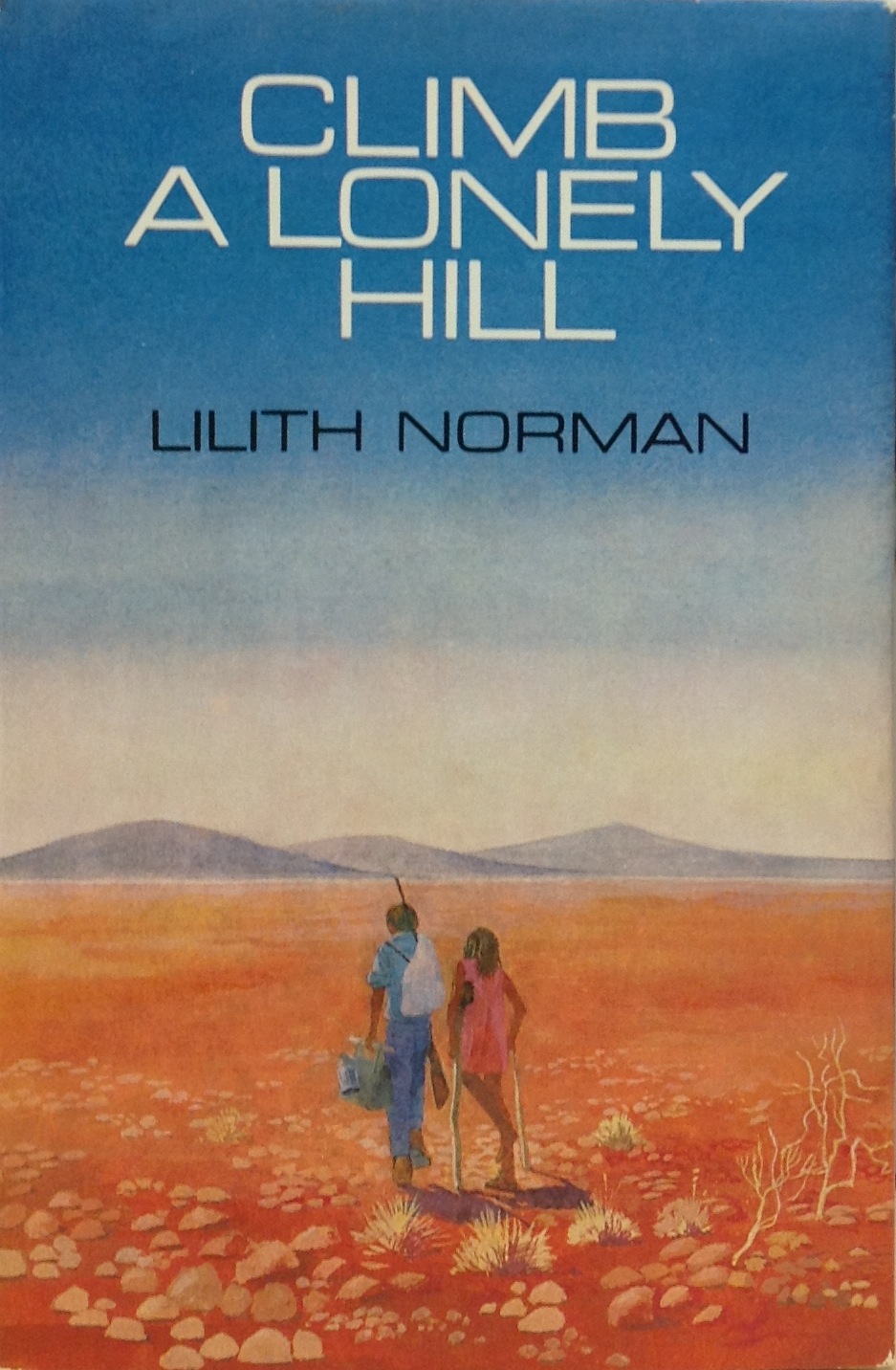 Front cover of Lilith Norman's haunting tale Climb a Lonely Hill (1970). Copies of this image may be used for private research/study. Any other use requires permission from the State Library of South Australia.


Garry Crew in Angel’s Gate (1993) sets a family story in a country town in which there are many brooding forces affecting the lives of the people. His mysterious and powerful novel can be read on many levels and contains a wide variety of themes. Nadia Wheatley in My Place,1987, traces the lives of children over two hundred years. In time the same place sees many changes in the environment and multicultural traditions.

Contemporary writers, such as Victor Kelleher, Robin Klein, John Marsden and Gillian Rubinstein among many others, have brought a maturity and insight to their work which equates with the best of world children’s literature. Similarly, picture book creators - Julie Vivas, Alison Lester, Bob Graham, Jeannie Baker, Steven Woolman, Shaun Tan to name a few, have all contributed to a contemporary golden age of Australian picture books and graphic novels.