Initially, authors of books about travels in the South Seas gave little more attention to Australia than to the Sandwich Islands or to New Britain since it was the voyages themselves and the discoveries of new lands and unfamiliar people that were mainly of interest. The Interesting and Affecting History of Prince Lee Boo (a native of the Pelew Islands, brought to England by Captain Wilson), 1789, characterises this concern with the unfamiliar and exotic elements of the newly explored Southern Hemisphere. Captain James Cook, however, was greatly admired and his journals provided the sources for books for adults about his voyages and for informative accounts for children.

With the English colonisation of 'the Antipodes', news of the strange new land soon appeared in the instructional geographies, natural histories and travellers tales. The earliest account of New South Wales written for children is in Modern Voyages by the Rev. John Adams, 1790. The description is derived from Governor Phillip and contains information on the climate and soil at Sydney Cove, together with accounts of Captain Cook, the shipwreck of the Antelope on the Pelew Islands and Prince Lee Boo's death in 1784, and epitaph. This odd mixture of excitement and dreary factual information provided much of the fiction as well as the educational material. Descriptions of real and imagined shipwrecks are scattered among the books, sometimes revealing every horrifying event and suffering experienced by the victims. One such account is found in The Shipwrecked Orphans, 1838, taken from the evidence of one of the surviving boys, John Ireland, who describes the murder of the crew of the Charles Eaton. 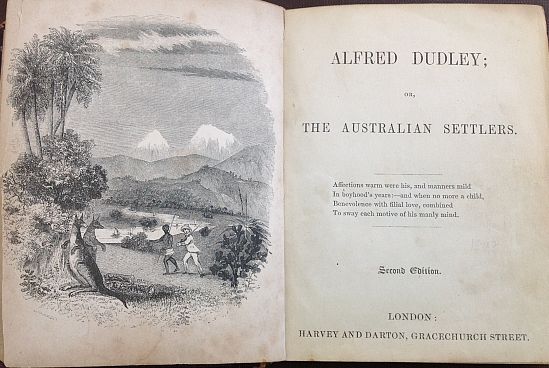 A particularly interesting early work of fiction is Alfred Dudley by Sarah Porter published in 1830. This is one of the few books to record the Port Jackson pidgin English from which the later pidgin English developed. In her book, the author has a friendly attitude towards Aboriginal people, a concern for their well-being and a willingness to treat them kindly. Though paternalistic in tone this work is one of the few to continue the sympathetic interest shown by Captain Cook in his journals.

The title page from Alfred Dudley, second edition (1842). Copies of this image may be used for private research/study. Any other use requires permission from the State Library of South Australia.

A sad and poignant statement appears in a picture book for young children by Mary Anne Fitz-Gerald, Australian Furs and Feathers, published in Sydney in 1889. "But since the white people came here about one hundred years ago, the Aborigines have been gradually dying out, and soon they will be remembered only by the names they have given to places and animals." This was a belief common amongst explorers, writers and researchers of the time and while we now know of the survival of Aboriginal society and reclamation of Aboriginal culture, it created a useful impetus to record and preserve aspects of Aboriginal culture which people feared would be lost.

The flora and fauna of Australia represented a reversal of the natural order to the inhabitants of the old world, including Peter Parley. "In New Holland we find black swans, and blue frogs; red lobsters, and blue crabs; flying opossums, and beasts with bills like ducks; fish that hop about on dry land, and quadrupeds that lay eggs", from Chapter XVII of Peter Parley's Tales about America and Australia by Samuel G Goodrich, 1862. 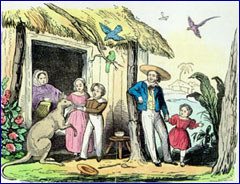 The kangaroo and other native animals featured prominently in natural histories as well as ill-informed stories about Australia. "What pleased little Meg more than anything, was a tame kangaroo, that lapped tea from her bowl and picked a bone like a monkey," writes 'Peter Prattle' of this herbivorous marsupial from The Happy Grandmother And Her Grandchildren Who Went to Australia, in Amusing and instructive tales, c.1832.

Illustration from The Happy Grandmother And Her Grandchildren Who Went to Australia. Copies may be used for private research/study. Any other use requires permission from the State Library of South Australia.

The Australian colonies had a reputation for shady dealings and a dangerous life style. "Thieves, robbers, swindlers, traitors, and troublesome persons, to the number of many hundreds, have been transported to this place", 'Peter Parley' warns (Tales of America and Australia), but in general the authors were more concerned with encouraging decent folk down on their luck to emigrate to the "land of mutton and corn, the home of health and plenty". England was "the land of taxation and paupers" in these books about theories on emigration, which spoke of life in Australia in the best possible terms. "Though everything looked new and strange, they all agreed that it would soon seem very much like home". The Happy Grandmother can see the hand of Divine Providence behind the settling in Asia, Africa and America of the clever, industrious and honest people who have been driven from England by poverty. She asks, "Who can calculate the good they will do? I sometimes think, that all the world will become one England" (Amusing and instructive tales). 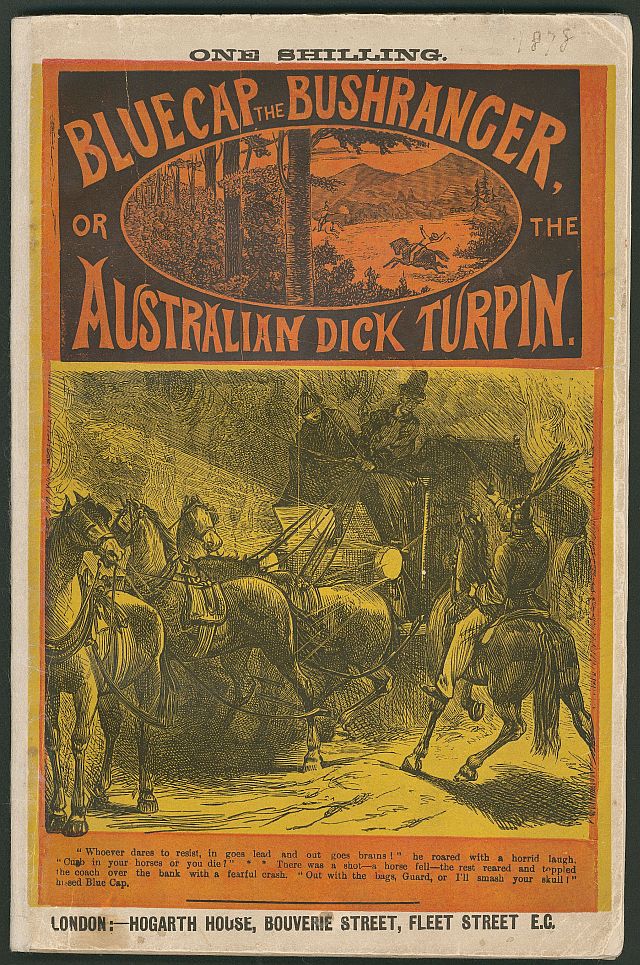 The discovery of gold was a powerful incentive for emigration. In children's books of the 1850s and 1860s the irregular lives of the gold diggers provoked many a moral, particularly on the value of temperance. Later in the century the days of the gold rush and the bushranger were to form the setting for bold, 'dreadful' adventure tales such as Blue Cap the Bushranger, 1878. "Whoever dares to resist, in goes lead and out goes brains!" he roared with a horrible laugh. Authors such as G.A. Henty, W.H.G. Kingston and G. Manville Fenn formulated the traditional Australian tale, mostly written by authors who had never been to Australia. Lured by Australia's siren song of wealth and success, their 'manly' heroes arrived on her shores, soon to become immersed in tried and true adventures in a strange new land.

Front cover of Blue Cap the Bushranger. Copies of this image may be used for private research/study. You may order a high quality photographic copy. Any other use requires permission from the State Library of South Australia.

Since the Australia of the 1890s was too urbanised for such heroes, these stories were usually set, as Henty put it, "in the early days when the bush rangers and the natives constituted a real and formidable danger to the settlers" (from the Preface of A final reckoning, 1896). However, in Jack Harkaway and His Son's Adventures in Australia, 1893, the heroes found Parramatta still seething with bushrangers, convicts and gold diggers; in between escapades with stock, savages and other villains, they also managed to found a pioneering settlement, Harkawayville.

Adventure stories often portrayed a ruthlessly exploitative attitude towards the original inhabitants, and the flora and fauna. The two young heroes of W. H. G. Kingston's Adventures in Australia, 1885, were described as sober, steady, strong, active, willing fellows with heads on shoulders and without any 'fine gentleman' notions. In the course of their adventures they shot other people such as bushrangers and Aboriginal people and birds and animals including emus, possums, wild cattle, kangaroos, dingoes, wombats and parrots.

The fashion for exploring the wilds was eventually superseded by stories of fantasy and of domestic life in Australia. These appeared before the end of the nineteenth century and were written by Australian authors. Seven Little Australians, 1894, gained world fame and together with Dot and the Kangaroo, 1899, has become an Australian classic.