History of the State Library of South Australia: Board members & legislation

1878 number 95 Copyright Act Part II section 15
Stated that a copy of every book published in South Australia was to be deposited in the South Australian Institute. This was the third copyright legislation after New South Wales in 1852 and Victoria  in 1869.

1883-84 number 296 Public Library, Museum and Art Gallery Act
The South Australian Institute was renamed the Public Library, Museum and Art Gallery. The new Board received an additional responsibility, over the network of country and suburban institutes which had sprung up in the years since 1856. At the same time, a new and independent body, the Adelaide Circulating Library, took over from the Board the business of circulating books on a subscription basis. The Board reported to the Minister of Education.

1898 number 700 Free Libraries Act
Allowed councils to establish free libraries after a poll of rate payers. (None did).

1905
After Federation the first Australian copyright legislation was the Copyright Act 1905 which replaced the state legislation. The section relating to legal deposit became part of the Library legislation, and details can be found under Legal Deposit in the Preservation section of this guide.

1909 number 986 Public library, Museum and Art Gallery and Institutes Act
Under the provisions of Act the Board acquired an additional responsibility when the School of Design, Painting and Technical Art was transferred to the control of the Education Department. In the same year the Boards control over country and suburban institutes was given to the Institutes Association.

1925 number 1683 An Act to regulate the Disposal of Public Documents, to amend the Public Library, Museum, and Art Gallery, and Institutes Acts, 1909 to 1924, and for other purposes
This Act made it compulsory for government departments to inform and get permission from the Public Library before destroying records, and also enabled the recovery of public documents from unauthorised persons. This was effectively Australia’s first archives act.

1955 number 46 Libraries (Subsidies) Act
Empowered the Treasurer to subsidise the running costs, and in 1958 the establishment costs, of a library established by local government up to an amount not exceeding the amount contributed by the council in any financial year.

April 1979
The Libraries Department was incorporated into the newly created Department of Community Development.

1997 number 8 State Records Act 1997 on the preservation and management of official record
Brought State Records under the control of a State Records Council, no longer responsible to the Libraries Board for the disposal of state government records

From 1997-98 to 2000-01
The Library was a Division of the Department of Transport, Urban Planning and the Arts reporting to the Minister for the Arts.

From 2001-02
The Library became part of the Division of Arts SA which is part of the Department of Premier and Cabinet continuing to report to the Minister for the Arts.

The Libraries Act 1982 and Libraries Regulations 1998 are the controlling pieces of legislation for the State Library of South Australia. 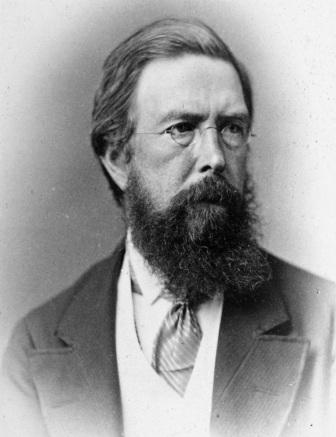 B 22103/59
View more information about this image. You may order a high quality photographic copy.
No known copyright restrictions - Conditions of use.

Three members of the Board served for more than 40 years: Sir Charles Todd shown here is the longest serving at 44 years 1866-1910,  followed by Dr Richard Sanders 1896-1940 and Dr John Jefferson Bray 1944-1987. As part of the Library Redevelopment in 2003 the study rooms were named the Bray Study Rooms after Dr Bray.

Until the list became too large, annual reports used to list all donations of archival and published items.

Since 1856 there has been a Board of the Library. The size of the Board has waxed and waned from an initial three to a maximum of 18 to today's eight members. From 1856 to 1940 members were elected by the cultural institutions affiliated with the Board, or were appointed by the Governor. From 1940 members were appointed by the Governor, with a specified number to be appointed from the public library area. Today three members are nominated by the Local Government Association with the other five nominated by the Minister. A complete list of Board members, chairs and terms of office is below.

The first female member of the Board was Jeanne Forster Young who served from 1916 to 1928. Jeanne Young was a close friend of Catherine Helen Spence and completed Spence's autobiography after the latter's death. Young's appointment to the Board was reported on in The Register of 17 January 1917 page 4.

WOMEN ON PUBLIC BOARDS
The appointment some weeks ago of Mrs. Jeanne Young as a member of the Board of Governors of the Public Library, Museum, and Art Gallery is to be accepted as a precedent, so far as the Government is concerned. The policy of the Vaughan Cabinet, so the Premier (Hon. C. Vaughan) stated on Tuesday, was to have women on public boards. This had been observed in other directions, and would be continued whenever the opportunity arose. In this instance the nomination did not come from the Public Library Board, but directly from the Government. There was no knowledge of Mrs. Young's appointment until it had been made by Executive Council.

The next female appointment was not until 1974 with the appointments of Margaret Bell, a staff member, and Joan Brewer, Head of the School of Librarianship at the Adelaide College of Advanced Education. Today the Libraries Act specifies that at least two members of the Board should be women.