History of the State Library of South Australia: Institute Building

Before the Institute Building

After arriving on the Tam O'Shanter in 1836, the colony's small library languished on the wharf in Surflen's store for two years, then in 1838 they moved to a wooden schoolroom in the parklands opposite Holy Trinity Church as part of the Adelaide Mechanics Institute. There is a plaque underneath the Morphett Street bridge which identifies the spot as the first public library.

In 1848 as part of the South Australian Subscription Library and Mechanics Institute the books moved to a large room in Peacock's Building, Hindley Street with Nathaniel Hailes appointed Librarian. Some months later they moved to the Exchange Chambers on the corner of King William Street and Gresham Place. For the next five years the Institute's affairs were in a muddle, and once the books were nearly lost altogether - deposited with a Mr da Costa to cover a debt of £20, and with him they remained until 1845, when Messrs. Brown, , Gilbert, C. Mann, and several others subscribed enough money to get them 'out of pawn'.

By the 1850s the library couldn't survive on subscriptions so the government helped finance the Library and Institute. On 7 September 1854 a Select Committee was appointed to look into the Institute and by 27 May 1856 a bill was passed to establish the South Australian Institute with several affiliated societies. The government agreed a purpose building was needed for the South Australian Institute. The building was originally intended for about where the Festival Theatre is. But there were debates in Parliament as to whether more buildings should be allowed in the Parklands, and noise from the railway station was said to be likely to distract readers, and the building would be lost in a hollow. As an attractive building it was decided to change the venue to North Terrace – but some people said nobody would go there as it was in such a quiet part of town. Such debate about development continues today. 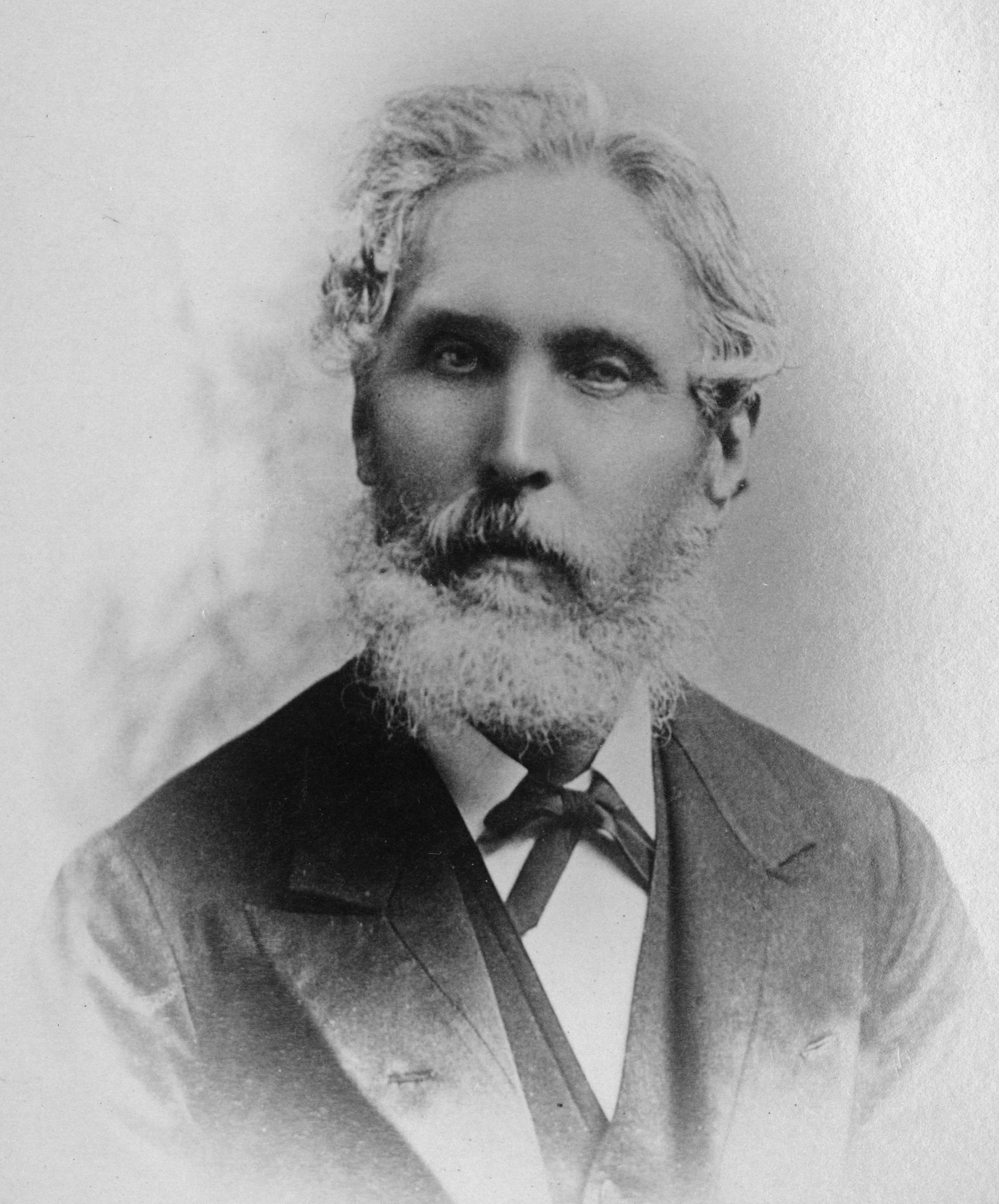 William Nicholls lived with his wife and family from 1876 to 1902 in an attached building behind the Institute Building where there were apartments for the caretaker, taxidermists and others.  In recognition of his years of service he was presented with a specially carved chair made for him. His obituary was published in The Observer of 13 July 1907.

B 10391
View more information about this image. You may order a high quality photographic copy.
No known copyright restrictions - Conditions of use.

The was designed by Edward Hamilton, the Colonial Architect, who also designed the 1855 extension to Government House, the Adelaide Club, various telegraph stations, post offices and lighthouses, including lighthouse and Glenelg Jetty.

Hamilton's Italianate design for the Institute with its portico was described in the Observer newspaper of 28 July 1860 as 'decidedly in advance of any other building, public or private, in the colony. There is harmony of proportion and a classical stamp about the whole structure which entitles it to be regarded as an architectural gem.'

Construction was of rendered random rubble, with Italianate features and portico, and was completed by builders English and Brown after just ten months in July 1860 for a sum of £4839.

The Institute Building became the focal point of the cultural life of Adelaide, housing the library, a reading room, an art gallery, a museum, a School of Art and Design, and meeting rooms of societies affiliated with the South Australian Institute, such as the Philosophical Society and South Australian Society of Arts which had affiliated in 1859. Activities included regular soirees, recitations and concerts. A lecture series on technical and scientific subjects made it both an adult education centre and the only institution in the colony providing technical or further education beyond primary level, other than private secondary colleges. In fact the South Australian Institute was the early university of the city.

The South Australian Institute was still a mainly private body and only subscribers could borrow books, the others had to read them in the reading room. Women borrowed under their husband's name and rarely visited the reading room. The reading room was on the western side of the entrance and was used for items that could not be borrowed, in particular newspapers. Visitors used to be able to take their dogs into the library and reading room until 16 July 1864 when the caretaker's dog was accidentally locked overnight in the reading room. It was so distressed it caused considerable damage to the blinds and woodwork. From that day dogs were banned from the library. The room remained as a newspaper reading room until April 1990, and housed the Bradman Collection exhibition in 1998. The room is now used for Library and visiting exhibitions.

Originally the entrance had two sets of stairs meeting at mezzanine level with a single set continuing to the first floor. The stairs were removed in 1919-20 and the entry to the first floor was floored over to increase space for the Institutes Association and the Adelaide Circulating Library. When the building was refurbished to house the Bradman exhibition in 1998 the staircase was reconstructed but with only one set from ground level to allow for the security desk. Today the entrance steps show a worn down step on the eastern side from millions of feet since 1861.

The official opening of the Institute Building on 29 January 1861 was a grand social 'soiree' attended by 850 people or nearly 10% of the city’s adult non-aboriginal population. The press reported 'never, perhaps in the history of our many and happy public reunions did the people of assemble under more auspicious circumstances than upon this memorable occasion'. Entertaining accounts of the official opening and speech, and descriptions of the building and the collections on display from the newspapers of the day can be read in the attachment. 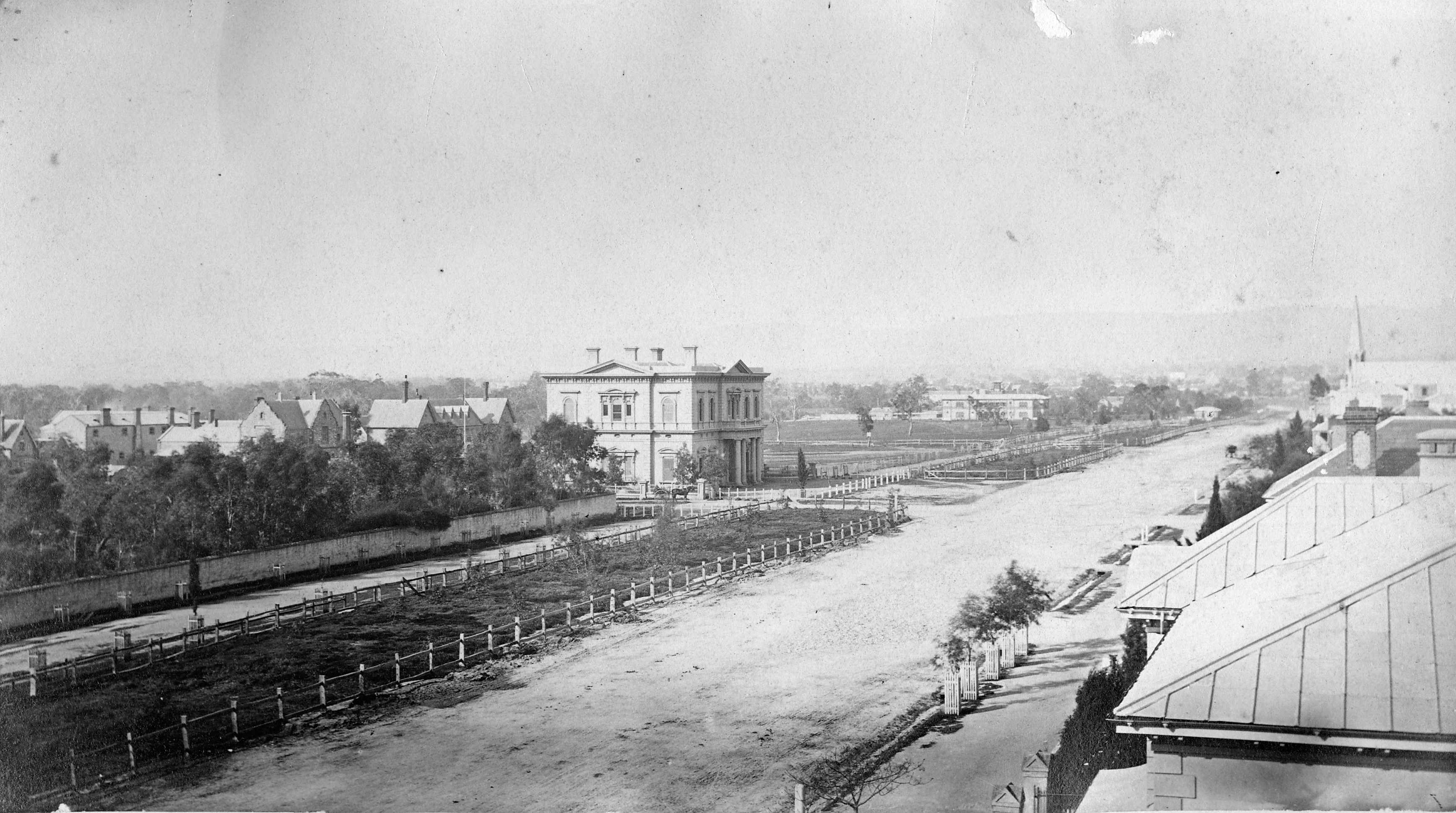 PRG 280/1/37/258 North Terrace in 1864 showing the Institute Building as the only major building; the Police Barracks are behind the Institute and the distant spire of Scots Church is far right.
View more information about this image. You may order a high quality photographic copy. No known Copyright restrictions - Conditions of use. 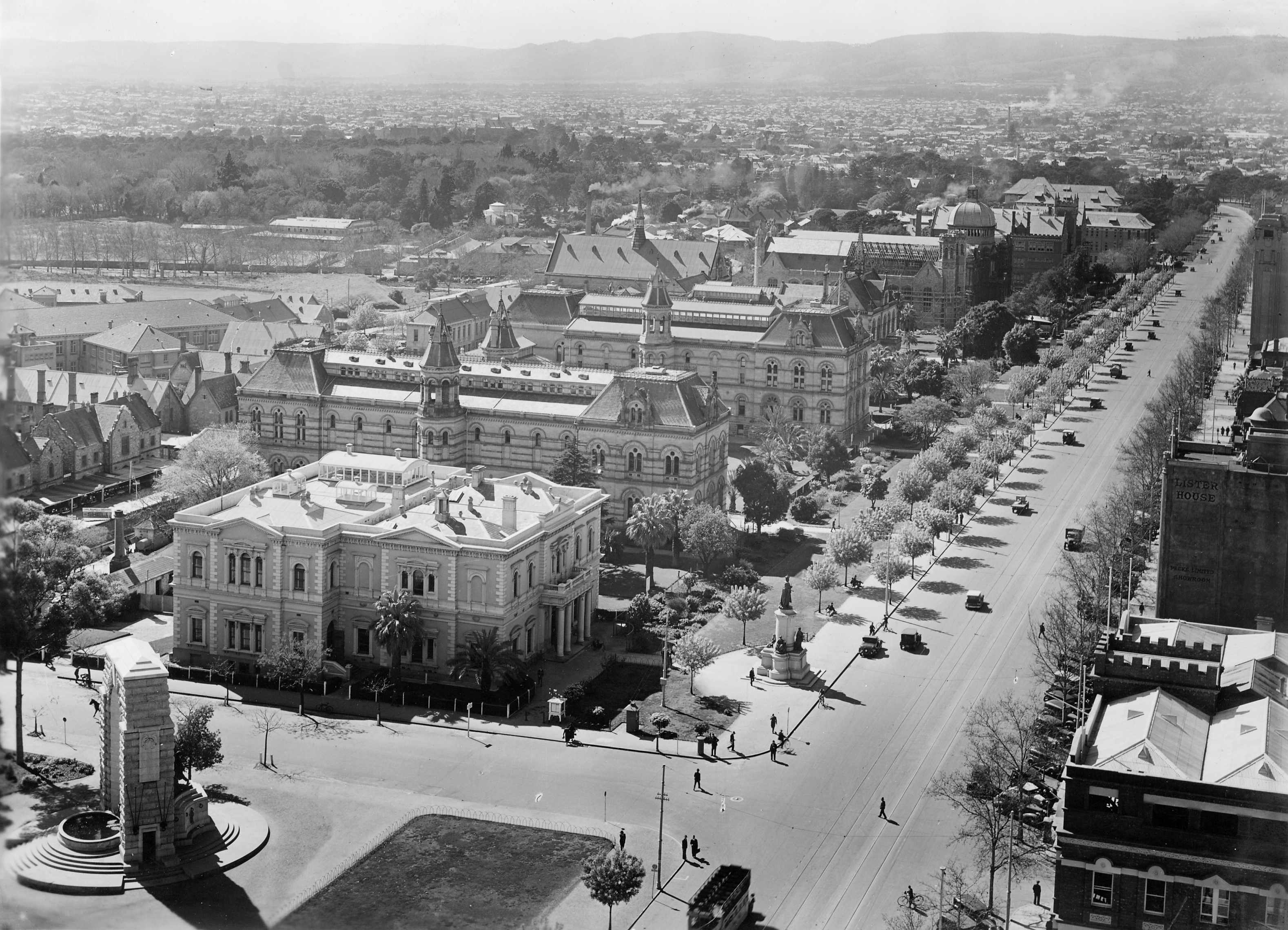 B 60354/63 North Terrace in 1937 showing the Institute Building with the extensions designed by C.E. Owen Smyth, Superintendent of Public Works, which opened in 1907.
View more information about this image. You may order a high quality photographic copy. No known Copyright restrictions - Conditions of use.

After the Institute Building

A commission of enquiry into the South Australian Institute concluded in 1874 that it had outgrown its accommodation and so began the process of moving the library and museum into their own buildings. Still under the one Public Library, Museum and Art Gallery Board, the Jervois Wing (1884), and the North (1895) and East Wings (1915) of the Museum were constructed.