History of the State Library of South Australia: Preservation

The preservation of South Australia's heritage collections at the Library takes many forms, including the acquisition of items by donation, legal deposit and purchase, optimal storage conditions, maintenance and conservation, reformatting and transcribing of original items, and harvesting of websites.

In 1884-85 the Library's annual report regretted to note that a person was convicted of mutilating the London Post Office Directory and Burke's Landed Gentry and was sentenced to 15 months imprisonment, and trusted that this sentence would deter others from like ill-doing.

In 1919 South Australia was the first state to appoint an Archivist in the Library to manage the unique unpublished collections. With only two staff, volunteers assisted with preserving the collections. With no photocopiers, let alone computers, the only way to make a copy of an item in fragile condition for use was by hand. Miss Lucy Lockett Ayers was the first of these volunteers and copied an old Port Adelaide shipping register from 1850 to 1857.

In 1941-42, during World War 2, the annual report noted that immediately the need arose, steps were taken to protect books and documents. In their enquiries for safe storage, the Board received offers from banks, the Vignerons' Association and from individuals, It was decided to evacuate all the material considered irreplaceable, which included the Archives (which closed them to the community), some South Australian newspapers and the early South Australian printed books.

In 1982 borrowing from the Reference Library ceased.

Today the Library has a reformatting program to reformat original items to produce surrogate formats for day-to-day use to protect fragile originals. For example, photographs are digitised so that originals can be protected from day-to-day use. The advantage is that the digitised originals can be seen worldwide on the website, improving access. Another example is the Library's microfilming program for newspapers which is highlighted in the box below.

The Library also has a transcription program where important handwritten letters, diaries and other original documents are transcribed by volunteers into Word documents and attached to the catalogue record, improving world wide access, and lessening the use of fragile originals. An example is a collection of records relating to the Point Pearce Mission of the Anglican Church between 1866 and 1892 compiled by Mrs Meredith, including letters, reports, lists of Aboriginal people, mainly Narungga  living on the mission, and Aboriginal names and words.

Newspapers are one of the most vital sources of information about a community, giving valuable insights into the social and political history and an essential resource for family and local history researchers. Photographs, pictures and even advertisements are useful sources of information about the past. The first South Australian newspaper was the South Australian Gazette and Colonial Register printed in London on 18 June 1836 before the colonists arrived.

The Institute Building housed a newspaper reading room until 1990. In the 1870s after illustrated newspapers were withdrawn from circulation, they were donated to the Hospital, Lunatic Asylum, Destitute Asylum, Marine Board for the light-keepers and the quarantined immigrants on board the Fitzjames.

The Library endeavours to acquire and preserve every South Australian newspaper as seen in the seven editions of the Sunday Mail from 1962. 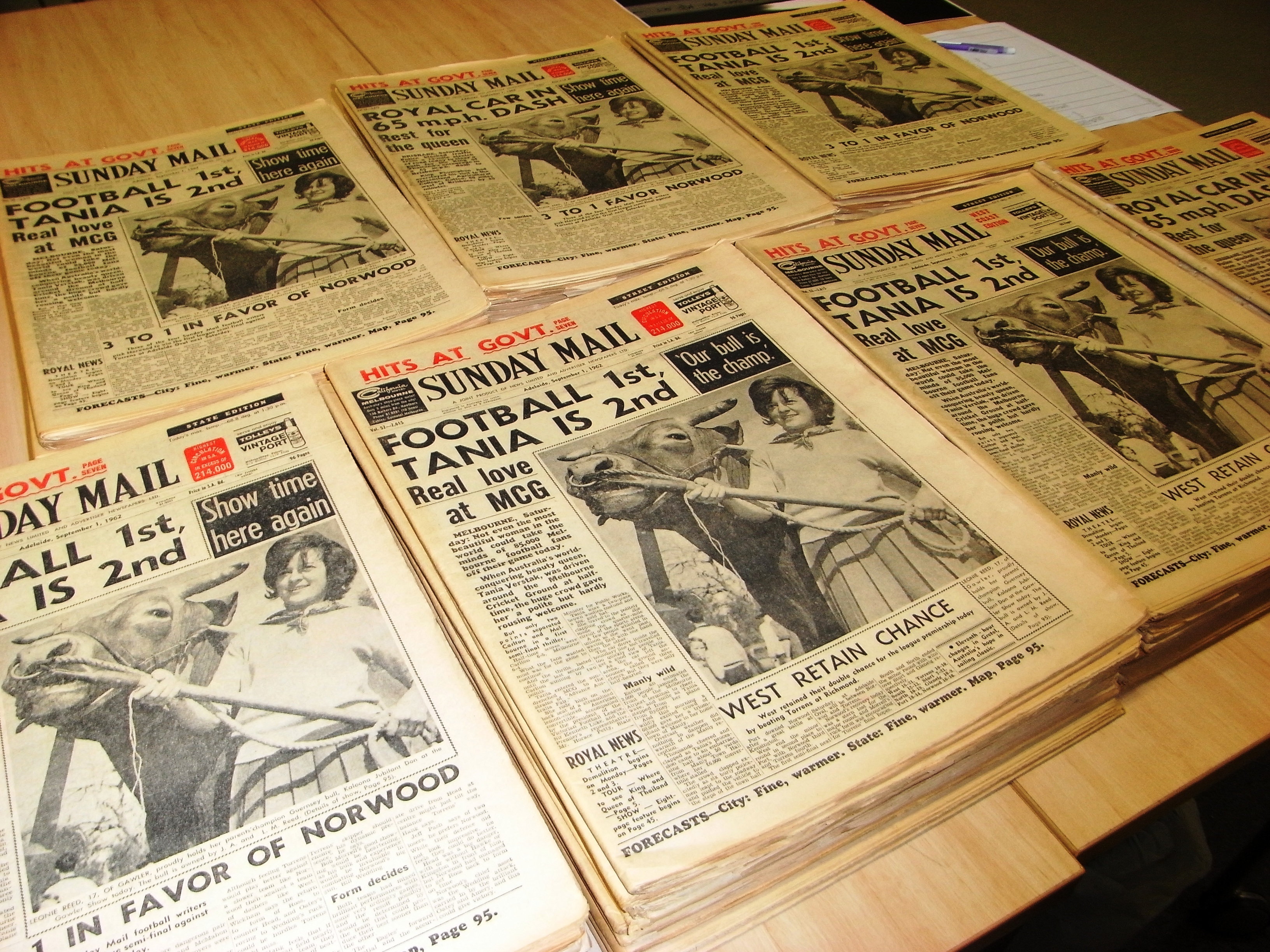 However, as with every state library there are gaps in the collection. The Australian Newspaper Plan  attempts to recover all newspapers missing from Australian collections, and the community's help is sought to find these missing newspapers.  A missing 1905 issue of the Blyth Agriculturist newspaper was recently brought to the Library, where Conservation Coordinator Peter Zajicek had the unenviable task of piecing it together. 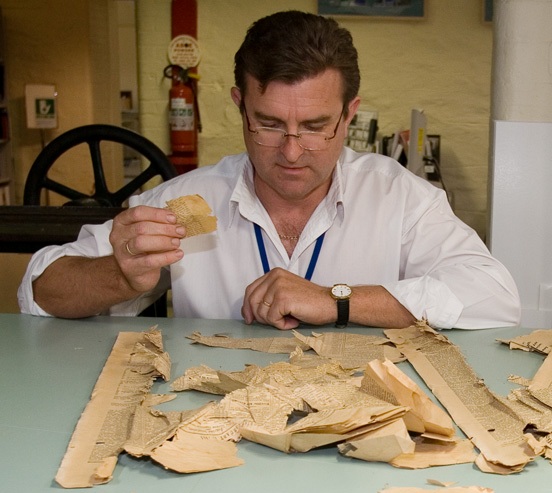 In order to preserve brittle newsprint, the Library has an in-house microfilming program, where South Australian newspapers are microfilmed to international standards. The newsprint is then set aside for preservation and the microfilm is accessible for reading and printing. A short in-house  video shows the process of turning newsprint into microfilm in the Library.

In 2009 the National Library of Australia established an Australian Newspaper Digitisation site on its national catalogue TROVE. Using each state library's microfilm it has digitised the nation's most important newspapers allowing keyword access. As funds allow, further digitisation will progress, within copyright limits, at present up to 1954.

Information about preserving and donating material

The Library welcomes donations of material to the collection.

The Library is entitled to receive a free copy of any item published in South Australia, whether print or audiovisual, read more about Legal deposit.

Official government records are not held in the State Library, but are held by State Records of South Australia

South Australia introduced legislation to preserve the state's book publications as early as 1878. The Copyright Act number 95 stated that a copy of every book published in was to be deposited in the South Australian Institute. This is known as 'legal deposit'.

In the flowery language of the day, Part II section 15 said: 'A printed copy of the whole of every book which shall be first published in South Australia after the passing of this Act, together with all maps, prints, or other engravings belong thereto, finished and coloured in the same manner as the best-published copies of the same, and also of any second or subsequent edition of any book which shall be so published, with any additions or alterations, whether the same shall be in letter-press or in the maps, prints, or other engravings belonging thereto, and whether the first edition of such books shall have been published before or after the passing of this Act, and also of any second or subsequent edition shall not have been delivered for the use of the South Australian Institute at Adelaide, bound, sewed, or stitched together, and upon the best paper on which the same shall be printed, shall, within two calendar months after the day on which any such book shall be first sold, published, or offered for sale within South Australia, be delivered by or on behalf of the publisher thereof at the South Australian Institute aforesaid.'

The annual report of 1884-85 reported that 11 books, 13 pamphlets and two pieces of music were deposited under the Act.

South Australia introduced legislation to preserve the state's official public documents in 1925. An Act to regulate the Disposal of Public Documents, to amend the Public Library, Museum, and Art Gallery, and Institutes Acts, 1909 to 1924, and for other purposes, number 1683 made it compulsory for government departments to inform and get permission from the Public Library before destroying records, and also enabled the recovery of public documents from unauthorised persons. This was effectively Australia’s first archives act, referring to original documents rather than published items.

In 1939 the Libraries and Institutes Act number 44 in Section 148 of the Act defined legal deposit more broadly to cover not just books, but other printed items such as a 'pamphlet, newspaper, sheet of letterpress, map, plan, chart or table, separately published'. In 1939-40 under legal deposit 17 volumes, 146 pamphlets, 2,942 newspapers and periodicals and four maps and miscellanies were received.

In 1989 the Libraries Act 1982 number 40 was amended to include the deposit of non-print formats. This acknowledged the increase in the range and number of non-print publications, and the Library's commitment to comprehensively collect and preserve this material.