History of the State Library of South Australia: Lecture rooms

Lectures have been an integral part of the activities of the State Library of South Australia as shown in the attached document and have taken place in three different locations in the Institute Building:

When the Institute Building opened in 1861, the main reading room on the western side of the entrance was used for soirees and lectures in the evenings - ten were held in that year. The room was closed early at 5.30 pm and the tables with the newspapers were moved and the seating had to be rearranged to accommodate an audience.

Catherine Helen Spence was the first woman to lecture there. It wasn’t considered appropriate for women to speak in public, so her brother read her lecture, but her writing was so illegible the lecture was a disaster, and she decided to give the next one herself.

Other activities included  'conversaziones', recitations, concerts, often featuring Herr Carl Linger, and the occasional craze such as 'Hullah', a form of singing instruction. There were commercial uses as well: rooms were hired out for dances (quadrilles) and other recreational pursuits, but never gambling.

With the establishment of the University of Adelaide in 1874 many of the lectures and classes were discontinued by the Institute.

When the Institute Building was extended in 1907, a dedicated Lecture Room was an important specification, and was created on the first floor on the western side. From 1907 to 1967 the Lecture Room proved popular for lectures, meetings and exhibitions by the Library and its affiliated societies, and it was also hired out to other organisations.

Other uses of the Lecture Room included a Welcome Home Social in 1919 held by staff for the last remaining members of the staff who served with the Australian Imperial Forces. For several weeks in 1926-27 the room was used for sittings of a Royal Commission on allegations of bribery against police officers. In 1954 during the visit of Her Majesty Queen Elizabeth II, the room was used by about 60 newspaper correspondents as a post office and press bureau. In 1954-55 a lecture by Mr F Claridge on his experiences in the Redex Trial Around Australia with the Redex Trial attracted so much notice that it was decided to repeat it, and on both evenings many people had to be turned away. On 14 October 1958 Sir Donald Bradman spoke on Cricket.

In 1967 when the Bastyan Wing was built, the Royal Geographical Society moved into the Jervois Wing, and its former room on the ground floor became a dedicated Lecture Theatre. The use of the former lecture room changed. It has housed the Institutes Association, the Women’s Studies Resource Centre,  the History Trust of South Australia’s Social history Museums Division, Community Information Services South Australia.

During the 2001-03 Library redevelopment, the room was divided to create washrooms on the first floor, and a lift was installed so the room was usable for community and staff activities. It was named the Room in December 2008 for the former Chairman of the Libraries Board of South Australia who was a strong supporter of community engagement for libraries.The first tenant of the room was the Collections Council of Australia, (since moved/ceased) and today houses the Department of Premier and Cabinet’s Capital City Project Team. 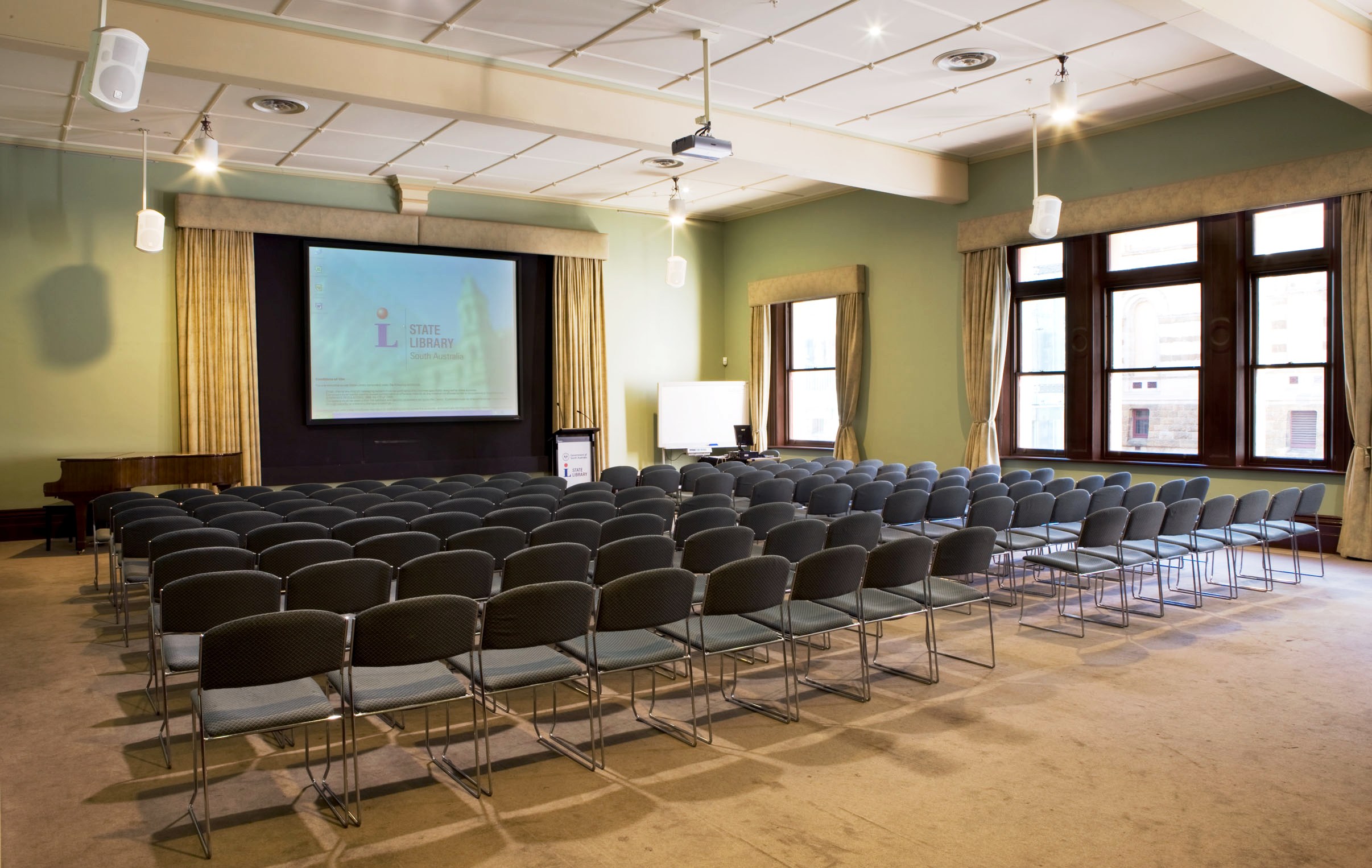 In 1967 when the Bastyan Wing was built, a Lecture Theatre with a raked floor was created in the room on the ground floor in the 1907 extension, which formerly housed the Royal Geographical Society of South Australia. The RGSSA is now on level 2 of the Mortlock Wing. In the 1990-92 conservation project the raked floor was removed.

Today the room is used for a variety of Library uses. The Lecture Theatre has projection and sound facilities and is well used as a venue for hire for meetings, seminars, training courses and social functions.

Basil Hetzel AC has made a significant worldwide contribution to medicine and to various South Australian academic and cultural institutions. He studied medicine at the University of Adelaide in the 1940s and decided that medical research was his passion. He is best known for uncovering the effects of iodine deficiency on the functioning of the thyroid gland and promoting a worldwide campaign to incorporate iodised salt into the diet of two billion people in 130 countries who live in areas that put them at risk.

Among his many awards and achievements he was Lieutenant Governor of South Australia 1992-2000, was named by the National Trust as a National Living Treasure in 2004 and had the 2005 Adelaide Festival of Ideas dedicated to him. As Chair of the University of South Australia Bob Hawke Prime Ministerial Centre 1998-2007, Dr Hetzel embraced the Centre agenda to promote public understanding of the issues which shape Australian identity and civil society. Dr Hetzel gave the ABC Boyer Lecture in 1971 under the title 'Life and health in Australia'. Among his books in the State Library's collection is Health and Australian society, published in 1974 and Chance and commitment: memoirs of a medical scientist, published in 2005.

Anne Hetzel OAM spent her childhood in Rhodesia, studying music at the Guildhall in London. She married Charles Fisher and moved with their six children from England to Rhodesia to Australia, where she went to university. After her husband's death in a car accident she worked as a teacher and with the Governor-General Sir Zelman Cowen and his wife in Canberra, where she met Basil Hetzel. Anne supported Basil's work with iodine deficiency, travelling with him to mainly third world countries. Throughout their travels she developed a love of art and textiles. She published A traveller's needle in 2001 and is a member of the Embroiderers' Guild. 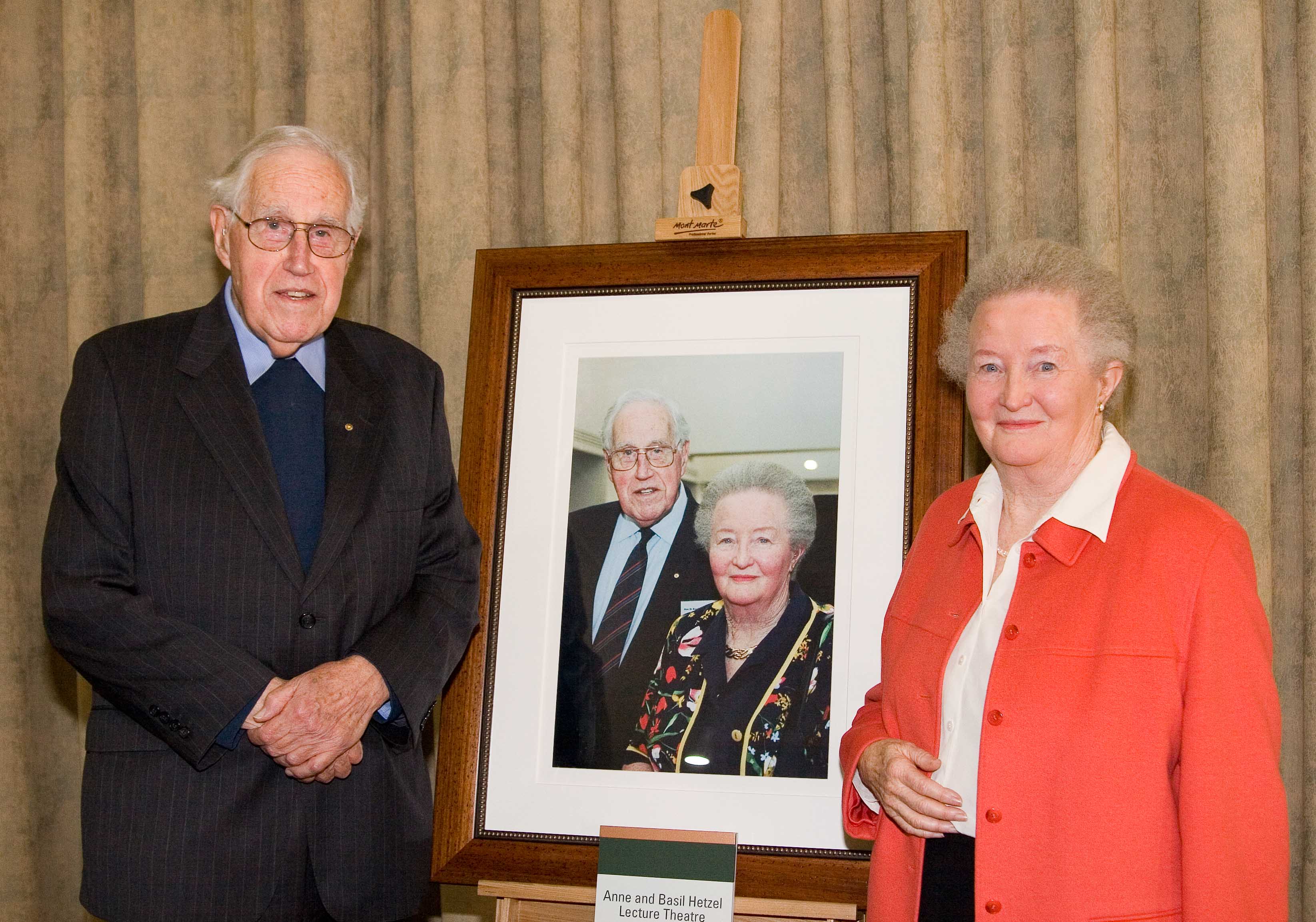