History of the State Library of South Australia: Staff & Volunteers

Library Directors back to 1856 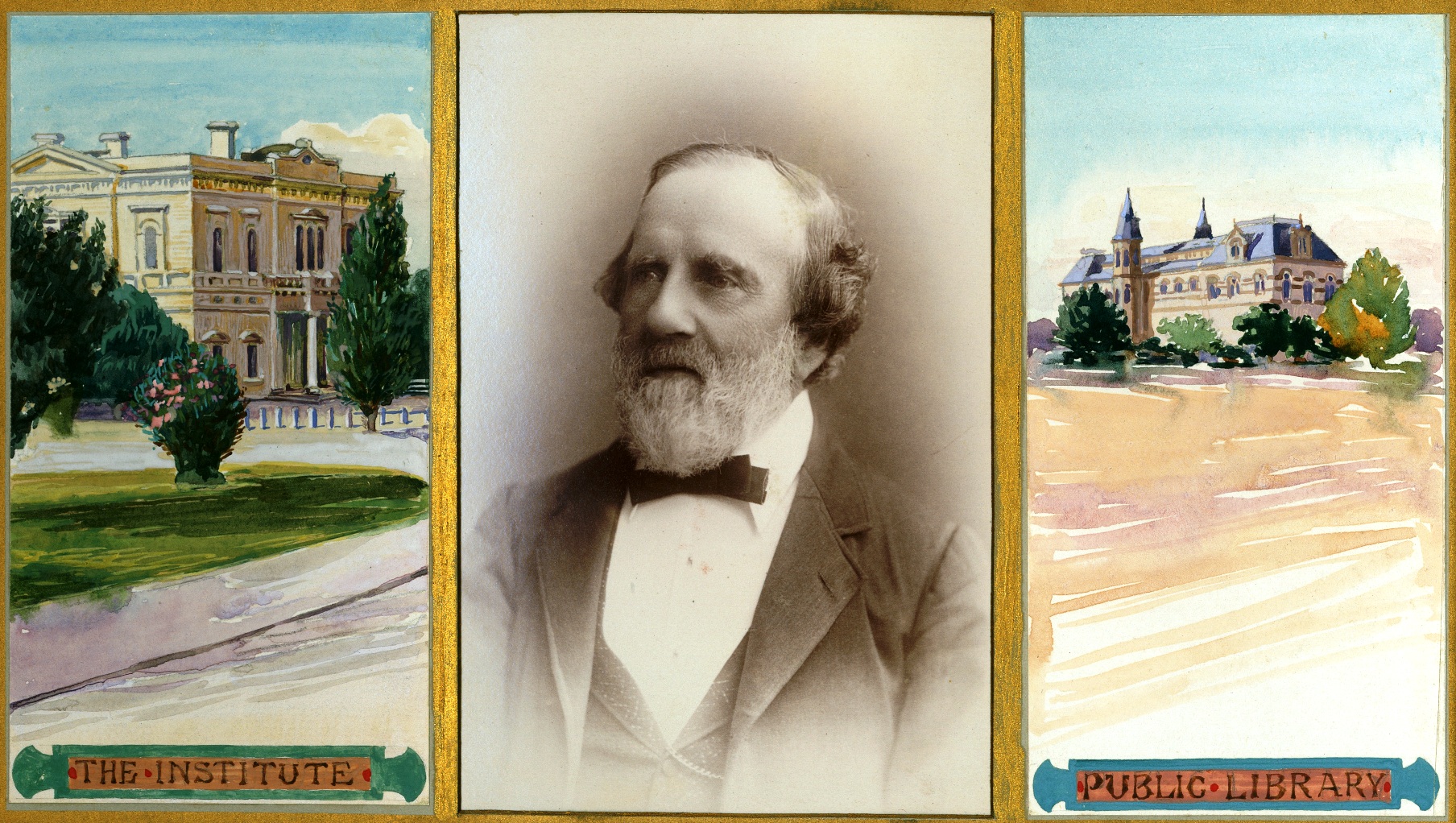 B 14104/1
View more information about this image. You may order a high quality photographic copy. No known Copyright restrictions - Conditions of use.

Robert Kay was appointed general secretary of the South Australian Institute at the age of 34 in 1859. He held this position for 45 years until his death in 1904. Robert Kay set the tone of the Library as a courteous, old-fashioned gentleman, a capable administrator, but also a musician, interested in French literature, with a lifelong fascination with chemistry and mechanics, and a Unitarian with an almost religious devotion to public education.

A photograph album  dated 1898 of portraits of the staff of the Public Library, Museum, and Art Gallery of South Australia, including the above portrait, was presented to Robert Kay.

In 1884 when the Public Library building opened there were 3 Library staff.

In 1940 the Public Library had 26 staff and three unnamed cleaners and the Archives had three staff. 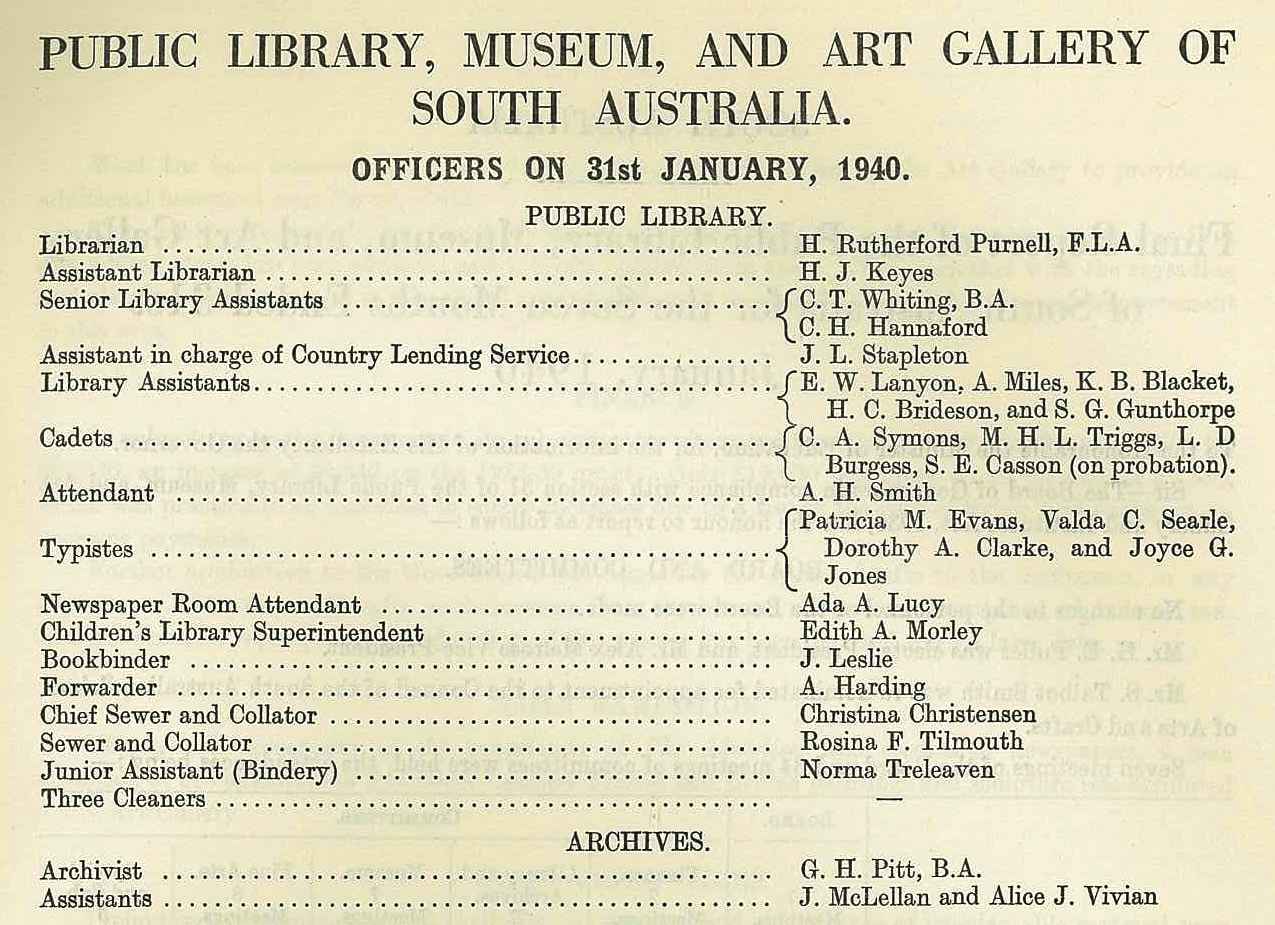 In 1967 when the Bastyan Wing opened there were 248 staff made up of 119 librarians/archivists, 59 clerical officers, 48 binders and 14 attendants. The Library staffed 17 government department libraries out of this component. The median age in 1967 was a young 23 years with high turnover of staff.

In 1974-75 there were 345 staff made up of 150 librarians/archivists, 101 clerical officers, 54 binders, 6 photographic staff, and 26 attendants. From these, 24 librarians and 16 clerical officers staffed 22 government department libraries.

A direct comparison with today's staff is not possible because classifications have changed, but in 2010-11 there were 162 staff (145 Full time equivalents), made up of  53 librarians/archivists, 90 administrative officers, 12 binders/photographic/reformatting and 10 casual retrieval/reshelving.  The Library no longer staffs government department libraries, but provides outsourced library services to three other government departments.The percentage of staff under the age of 24 in 2010-11 was 1% with a low turnover of staff reflecting the workforce of today.

The Friends of the State Library of South Australia formed in 1932 when there were insufficient government funds available for the Library's ordinary book requirements. Initially the Friends came to the aid of the Library with funds for this purpose and since then have supported the acquisition of fine books, manuscripts and works of art to enhance the Library collections. They are the oldest Friends group of any of the state libraries. Once a month they hold a Wednesdays at One program where South Australian identities speak about books in their life. New members are always welcome.

In 1921 the Board closed the Library for the first picnic of the LIMUSART social club (Library, Museum, Art Gallery) on 22 October at Morialta. Such closures occurred for several years. An album from 1922 has 20 delightful images of a Public Library staff picnic, a visit to the beach and cleaning week. The social club arranged for a staff ‘swimming pool’ to be installed using an old macerating tank from the Museum.

Volunteering at the State Library

Volunteering goes back many years in the Library.

In the 1920s there were only one or two staff in the Archives. There were no photocopiers, let alone computers to help with preservation, so if something was in fragile condition the only way to make a copy for use was by hand. This was the first task of the earliest of the honorary helpers in the Archives, Miss Lucy Lockett Ayers, who copied an old Port Adelaide shipping register from 1850 to 1857 and who continued her commitment to the Library through to the 1960s.

In 1931 when the Assistant Archivist resigned, the Archivist had only voluntary help for six years, and that only occasionally.  These volunteers copied manuscripts, indexed and translated documents, and did much valuable work.

Over the years various people have compiled indexes to archival items and newspapers, often on subjects of particular interest to them.  For example, Sally Horner spent ten years going through the Register newspaper from 1836 to 1887 creating an index to overseas departures by passenger ship from South Australia. The Horner Index was launched in 1992. It was originally a card file and is now online on the Library's Immigration to South Australia Library Guide. Tony Arbon's interest in shipping saw him donate his collection of shipping references and clippings compiled over some 40 years to the Library as the Arbon Collection.

Mabel Somerville gave her time to index the papers of her father J.D. Somerville, a railway construction engineer and local historian, and later made a generous bequest to the Library in memory of her father. Some volunteers were staff members who worked extra hours on their special projects. For example Mr Ron Temme collected newspaper references to shipwrecks in South Australian waters from 1836 to 1990 as the Temme index.

In September 1993 Government policy on volunteering promoted the inclusion of volunteers in Government agencies within clear guidelines.  The State Library decided to explore the idea of greater involvement of volunteers, and a working group was initiated to investigate the options.

In 1994 the State Library introduced an English Language Learning and Improvement Service (ELLIS) with a group of 12 volunteers.  In 1995 the Library celebrated its first organised intake of specific-project volunteers, with an orientation morning in the Institute Building for 30 volunteers.

The State Library has benefited enormously from the work of volunteers for over three-quarters of a century, and this tradition continues. Today the State Library Volunteer Program is an active and enthusiastic group of people.